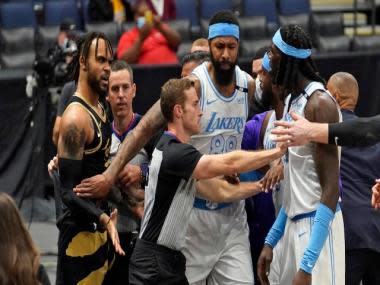 Raptors forward OG Anunoby and Lakers big man Montrezl Harrell were both fined in connection with the incident in the first quarter of the Lakers’ 110-101 victory on Tuesday over the Raptors at Toronto’s pandemic home base in Tampa, Florida.

Harrell and Anunoby were both assessed technical fouls and tossed from the game as part of the scrum that started with the Lakers’ Dennis Schroder fouling Anunoby on a layup attempt.

Schroder grabbed Anunoby around the waist after the foul and Anunoby grabbed Schroder’s leg and tumbled him to the court.

Anunoby has been fined for “recklessly” initiating the event, Kiki VanDeWeghe, executive vice president of basketball operations, said in announcing the punishments.

Harrell waded into the fray and has been fined $20,000 “for aggressively entering the altercation and shoving Raptors guard Gary Trent Jr,” VanDeWeghe said.

Bembry, VanVleet and Horton-Tucker were suspended for leaving the bench area during the altercation.

Bembry was due to serve his suspension when the Raptors hosted the Chicago Bulls on Thursday night in Tampa.

VanVleet, who has missed the past two games with an injury, will serve his suspension in the next regular season game for which he is eligible and fit to play.

Horton-Tucker was to serve his suspension on Thursday when the Lakers played the Heat in Miami in a rematch of the 2020 NBA Finals.

Read more on Sports by Firstpost.