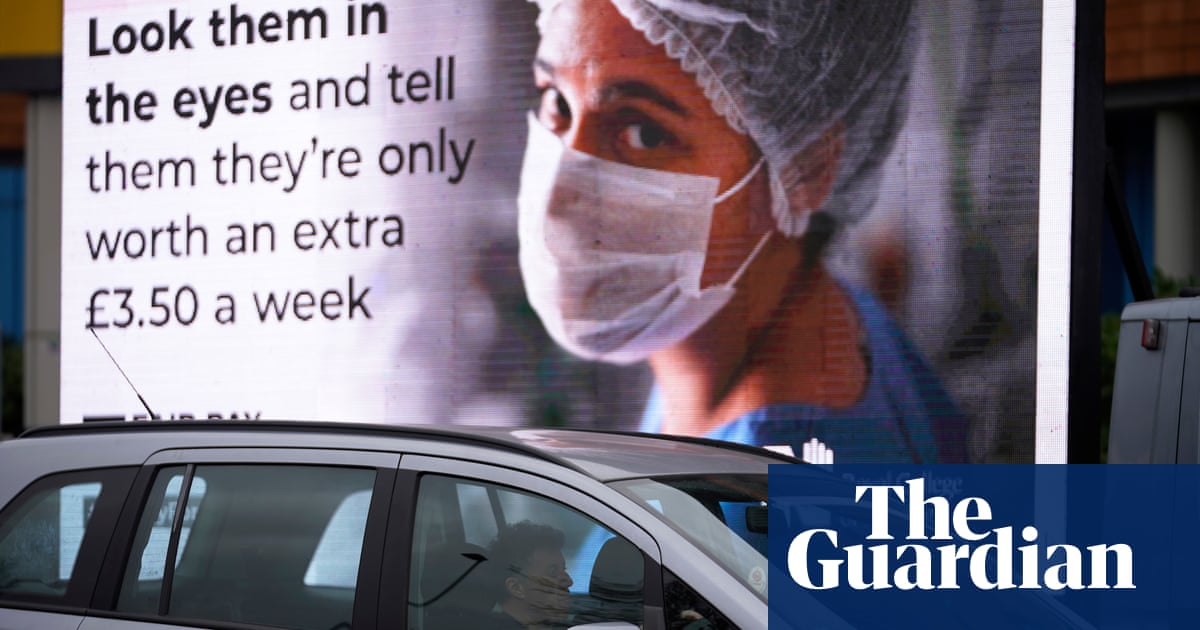 Ministers are on a collision course with millions of NHS staff as they insisted the country could not afford a more than 1% pay rise for health workers even as nurses leaders raised the prospect of strike action.

The health secretary, Matt Hancock, on Friday insisted the decision to recommend such a small increase was due to an assessment of “what’s affordable as a nation” after the economic toll taken by the coronavirus crisis.

But amid fury from across the public sector, some Conservative MPs expressed fears the government was heading for a humbling U-turn similar to that performed over free school meals.

Asked repeatedly at a Downing Street press conference about the plan, announced on Thursday to a furious response from unions, Hancock argued he had secured a good deal for NHS staff, saying he was “very pleased” they had been excluded from a wider public sector pay freeze.

Quizzed about his repeated praise for NHS workers over the course of the pandemic, Hancock insisted he could not be more generous: “We do have issues of the affordability because of the consequences of the pandemic on the public finances, which were set out in the budget this week.”

Hancock also ruled out the idea of a one-off payment for health staff in recognition of their work in the pandemic, as promised by the Scottish government to its workforce, saying this “isn’t the approach we have chosen to take”.

Responding to a question from the Nursing Times about a potential staffing crisis if demoralised nurses quit in large numbers, Hancock said his grandmother had been a nurse in Lincolnshire, adding: “I bow to nobody in my admiration for nurses.”

The Royal College of Nursing (RCN) has described the 1% figure as pitiful, holding an emergency meeting that agreed to set up a £35m fund to support members in the event of a strike.

While this does not make industrial action inevitable, it illustrated the strength of feeling among NHS workers, with the British Medical Association and unions representing other staff similarly furious.

The NHS Confederation, which represents hospital trusts and other organisations, expressed alarm at the prospect of a strike. “This is not the scenario anyone would want, but this clearly shows the depth of feeling at the RCN,” its chief executive, Danny Mortimer, said.

How is NHS pay decided and what is the case for a 1% rise?

In another sign of the PR battle to come, the Unison trade union is organising a public slow handclap for this Thursday evening to protest at the pay offer, mimicking the weekly applause for NHS staff amid the first Covid lockdown.

One Conservative MP said he had already been contacted by constituents angered by the pay decision, which he called “an appalling PR move, apart from anything else”.

The 1% figure, which is for staff across the UK, will now be considered by the Review Body on Doctors’ and Dentists’ Remuneration, and also the NHS pay review body, which covers nurses and other staff. Both are expected to report back in May, with final decisions made by Hancock or the relevant devolved administration.

While pay rises have been more generous in recent years – a 2018 deal gave nurses and other health staff a salary rise of at least 6.5% over three years – this followed a near pay freeze for seven years during the period of austerity politics. Official inflation forecasts also expect this to rise above 1% this year and next.

The TUC said on Friday that its analysis showed the cumulative effect was that if the 1% increase goes through for 2021-22, nurses’ pay will be £2,500 less than in 2010 when adjusted for inflation, with equivalent falls of £3,330 for paramedics and £850 for porters. A 1% rise would be “a hammer blow to staff morale”, the TUC’s general secretary, Frances O’Grady, said.

Downing Street has also defended the offer as “what is affordable”, while declining to absolutely rule out any eventual increase. “We will not pre-empt the recommendations of the independent pay review bodies,” Boris Johnson’s spokesman said.

Some Conservative MPs have speculated that the 1% figure could end up being an opening offer, intended to limit any increase, given the RCN’s request for a 12.5% rise. “It’s better to draw the line closer to the start than to the end of the race, to stop the snowball,” one said.

Another Conservative backbencher said much would depend on the upcoming political battle, with Labour hoping to “turn it into another free school meals”, when the government backed down over holiday provision after a campaign led by the footballer Marcus Rashford.