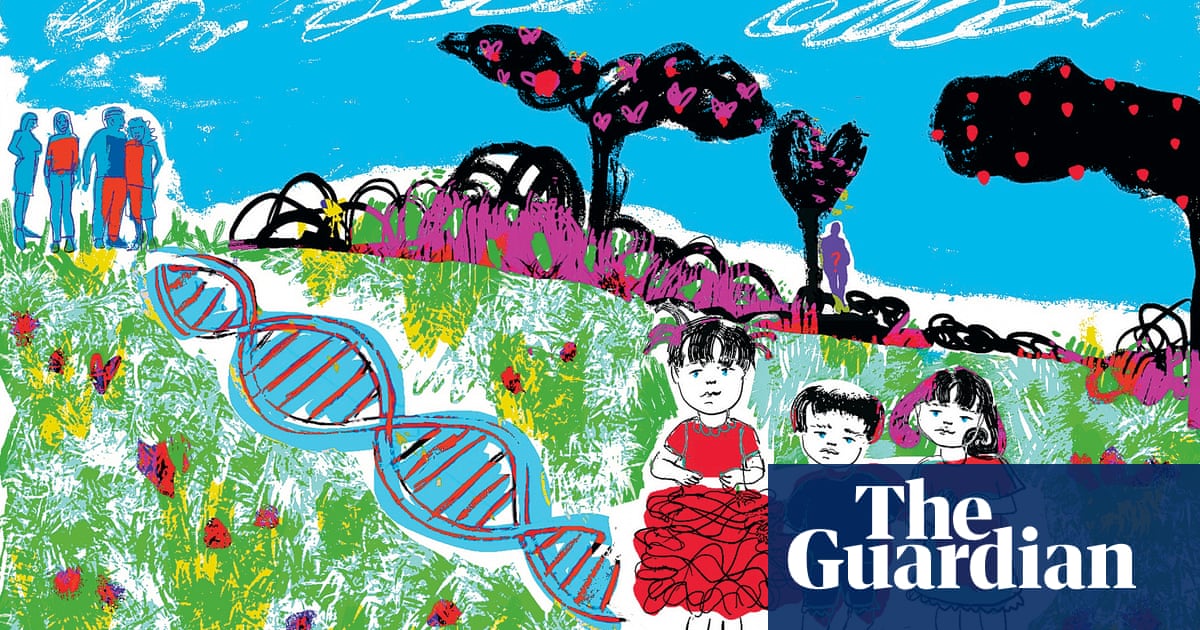 Caroline Pearson, a podcast producer from London, was a few days into her maternity leave when she discovered that her unborn daughter had two sisters. She had visited a website a friend had told her about, which allows recipients of donated sperm (such as her) to search for families who have used the same donor. If they’ve registered with this website, they could be anywhere in the world, since the US sperm bank chosen by Pearson and her husband, Francis, ships internationally, and the website, Donor Sibling Registry (DSR), is also US-based with an international reach. Pearson couldn’t resist, and typed in the donor’s reference number.

“Suddenly, I was overwhelmingly curious,” Pearson says. She didn’t expect to find anything – let alone two families living within a half-hour radius. The first profile was a single mother to a two-year-old girl, living nearby in London. It seemed an extraordinary coincidence. Caroline was “totally giddy”; her partner Francis, a photographer, was cautious. “I tried to rein things in,” he says. “Caroline was pregnant and we were already dealing with becoming parents, and the donor process. But all this other stuff, it was so unknown. I’m practical and you think: yes, that could be amazing – but what if they’re awful people?”

Suddenly there was a lovely little girl, who shared our baby’s DNA. It was extremely surreal

But Pearson had already registered on the site and sent a message. In her response, Emma Campbell, a talent agent, wrote about her daughter, Laurie, and quipped: “It’s a hard slog for those of us who don’t have the luxury of just having a shag and getting a baby – great to meet another kindred spirit!” Pearson warmed to her immediately. Without warning, Campbell also sent a photo of Laurie. “I hadn’t been ready for that,” Pearson says. “You worry: will my baby look different, somehow? Then, suddenly, there was this lovely little girl with an impish smile, splashing around in her garden like any other two-year-old. An actual person who shared our baby’s DNA. It was a relief, but also extremely surreal.”

Then Campbell dropped another bombshell: “Did you see on the site that there’s another girl from our donor? She’s also in London and we’ve met a couple of times. She’s lovely and her mum is, too – and single, like me! Three sisters in London from the same donor – totally mind-blowing.”

The third mother was Lucy Jeffreys, a diplomat with a daughter, Alice, then four, also based in south London. As mother to the oldest child, she’d been the first to register on the DSR website. “I think it’s important for children to know their biological heritage,” she says. “I’ve done some family history and met distant relatives. I wanted Alice to have those links.” All three families finally met when Polly, the Pearsons’ baby, was six weeks old.

“We were pretty nervous and wanted them to like us,” Pearson recalls. “I made a cake.” Jeffreys, Campbell and the girls arrived together, bearing gifts. The mood was warm and easy; the older girls played, argued a bit and were briefly interested in the tiny baby. Photos were taken – fairly standard stuff. Less standard was everyone noting the girls’ identical noses.

The adults talked about what had drawn them to the donor. All three had used a US site because they tend to provide much more information than European sites: a donor statement (a letter for potential parents), and photos. Campbell says she liked her donor’s intelligence and artistic nature, and had also enjoyed the last book he’d read (Cloud Atlas). Jeffreys felt he would get on with her family, while Pearson said it was his final, dramatic sentence that had stuck in her mind: “And one day I hope to run for office.” “It’s good to be ambitious!” she says.

Every year, in the UK, about 2,700 people have treatment with the help of a donor, according to the Human Fertilisation and Embryology Authority. And yet the UK’s Donor Conception Network (DCN), the UK’s main support organisation, says it has known only “a handful” of cases where British families are in contact from early in the child’s life. The 70,000 members of the Donor Sibling Registry come from 135 countries, and include about 1,000 UK families. “We created the DSR so parents, donors and offspring could make mutual consent contact,” says founder Wendy Kramer, herself the mother of a donor-conceived son. “And there are many good reasons – medical and psychological – to connect while children are young.” Sperm banks, Kramer says, can’t be relied on to notify recipient families about medical issues, which could be vital information for offspring. She adds: “It’s also an innate human desire to want to know where and who we come from; it helps with identity formation.”

Campbell and Jeffreys had sought out a sperm donor because they were single, while the Pearsons did so due to fertility problems. How was all the donor talk for Francis, being the only father? “I dealt with everything years ago,” he says. “I was just excited there was a way to have a child and, I’ll be honest, I’ve forgotten what he wrote. Only when I notice the similarities in the girls do I think about him.”

While the girls’ physical similarities are more obvious, shared traits are harder to identify – though all the parents have noted their daughters’ “terrifying” enthusiasm for daredevil climbing.

More than two years on, the three families are close and see one other as often as they can, over Zoom and in real life. When lockdown rules relaxed last summer, they had a playdate in a park. Laurie, five, brought a bag of fruity treats she’d remembered Polly liked; Jeffreys brought some dresses that Alice, six, had outgrown; and two-year-old Polly tried to get the older girls to chase her.

It feels really special we met; the randomness of choosing a donor translating into something so solid

How much do the parents think the children understand? The Donor Conception Network promotes being open and honest with children from a young age, and the four parents agree. Jeffreys reads Alice a story she wrote herself explaining her daughter’s origins, and Alice proudly tells people about her little sisters, “using surprisingly advanced reproductive terminology,” Jeffreys says, laughing. Campbell and the Pearsons use the DCN-published children’s book Our Story: How We Became A Family. Francis says Polly points at the characters, saying: “Mummy… Daddy… Donor! She’s just learned that from the page about ‘the kind people who help families to have children’. Though, of course, she doesn’t really understand yet.”

The books don’t mention donor half-siblings, so the parents add that part. “Laurie knows they all come from the same seed,” Campbell says. “She’s never said ‘sister’, but I think she has a sense it’s a special thing, somehow.” Jeffreys is often abroad with Alice for work but they all try not to miss the girls’ birthdays. All attended Laurie’s birthday in 2019. “I spotted Alice tugging at the sleeve of the children’s entertainer, pointing at Polly,” Francis says. “I could see she was saying, ‘That’s my sister.’” Jeffreys isn’t surprised. “Alice is delighted she has sisters. Lots of her classmates do, and now she’s like them.”

How did family and friends react? “They were amazed,” Campbell recalls. “Most wanted to know if they looked alike.” She was pleased to have all three at the party. “I was excited about my larger group of friends and family meeting the sisters. But, of course, it was total chaos and I didn’t end up making any formal introductions. Everyone just got on with it – probably the best way.”

“Lucy and Emma are pretty upfront,” Francis says, “but as there are two of us, no one wonders who Polly’s father is, so it can feel a bit announce-y to explain. There’s plenty of time to widen the circle – and we will. We want Polly to be proud of herself and her family, all of it; but ultimately, it’s her story, not ours.”

It’s not only family or friends who need to be told. Not long before the first lockdown, Alice spent a week at Polly’s nursery when Jeffreys needed short-term childcare. The parents briefed the nursery. “It’d confuse Alice if someone said, ‘Don’t be silly, she’s not your sister!’” Pearson says. “Of course, Alice immediately announced the facts to staff. ‘What did she tell you?’ I asked when one relayed this to me. She widened her eyes: ‘Oh, everything.’”

There could be more half-siblings out there, and the girls may also want to contact their donor himself when each turns 18 and his details become available to them. There is certainly going to be at least one more sibling: Pearson is now five months pregnant, after using the same donor.

What about the future of their own relationships? All feel these are to be carefully protected. “It feels really special we met; the randomness of choosing a donor translating into something so solid,” Campbell says. “Other people may think, ‘That’s a bit weird’ – but I feel a pride in embracing that newness, the modernness of it. I think it’s really brave. And it’s for the girls.”

• Names have been changed.