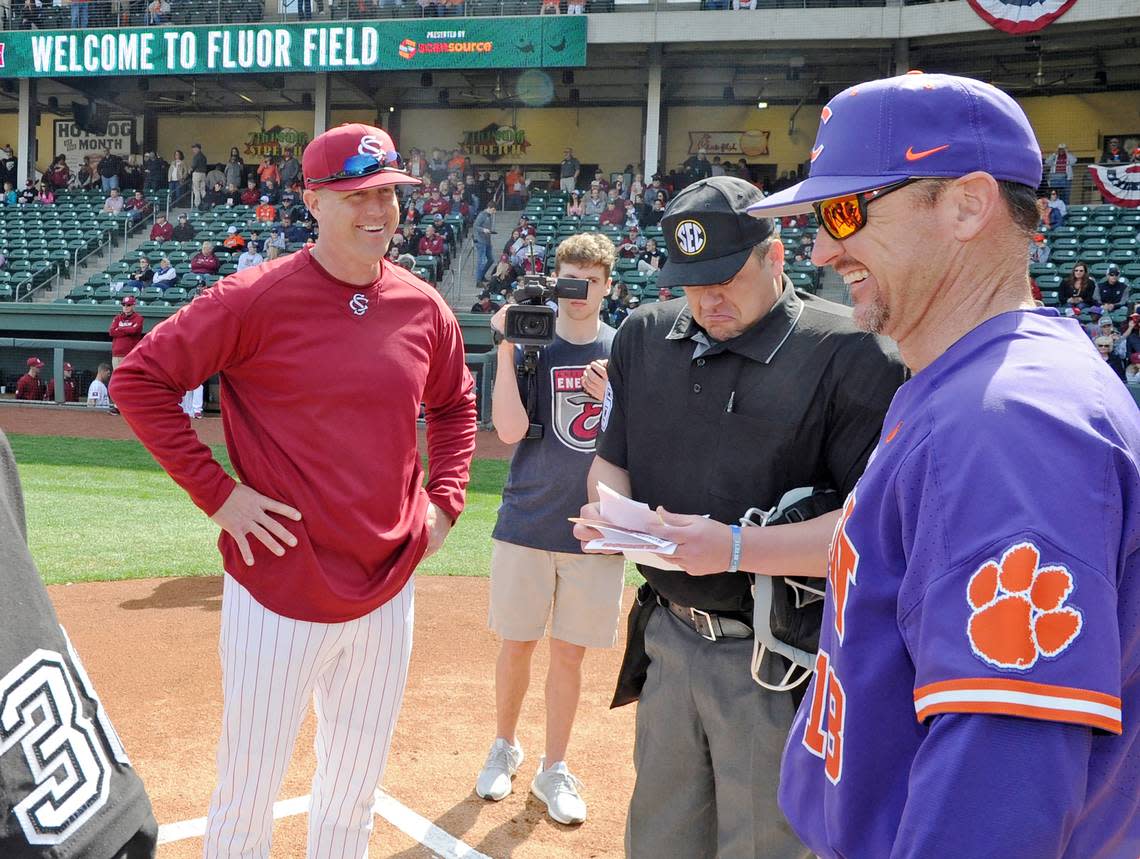 One of the oldest, fiercest rivalries in college baseball is set to return this weekend when South Carolina and Clemson meet three times with in-state bragging rights on the line.

The rivalry series is taking place a week earlier than usual this season, as Clemson had its conference schedule expanded because of the COVID-19 pandemic. As a result, the teams have only had one weekend series to prepare.

The series will follow the same format it has used since 2010, with a game each at the teams’ respective home parks and a neutral-site game sandwiched in between, this year in Greenville. The games won’t be shown on cable TV, but all three will be streamed online via the ESPN app.

In addition, the games will be broadcast on the radio on many of USC’s statewide affiliate stations or through those that air Clemson games. Both schools will also stream their radio broadcasts online.

With all that in mind, here are the key details on each game, plus some major storylines to watch for over the weekend.

Forecast: Showers likely, around 80% chance of precipitation with a high of 47 degrees. Likelihood of rain continues for much of the evening.

Forecast: 30% chance of showers, warm with a high near 77 degrees

No one would claim this rivalry has ever lacked for intensity, even if the national prominence may have faded a touch. But this year could feel especially momentous. The Gamecocks and Tigers didn’t get to play in football, men’s basketball, women’s basketball or even volleyball due to the pandemic, which makes this series all the more important in determining who gets bragging rights for the year.

Both coaches, USC’s Mark Kingston and Clemson’s Monte Lee, have been asked about the possibility of added pressure and largely dismissed it. Still, there’s no denying how the fans feel, and that energy and excitement in the crowds (reduced for COVID-19 safety protocols) can help feed players’ fires.

There’s not a player in the country off to a hotter start in this 2021 season than South Carolina junior Wes Clarke. In four games, he’s accumulated six home runs, 11 runs scored and 12 RBIs to go with a .769 batting average and 2.308 slugging percentage.

No one expects Clarke to keep up that pace over the course of the season. At this point, it’s just a question of how long he can keep the magic going — and if it can power the Gamecocks by the Tigers. Two years ago, South Carolina claimed the series win behind a monster effort from T.J. Hopkins, who went 7-for-15 with three homers, nine RBIs and five runs. At this rate, those numbers would actually mark a decline for Clarke.

The Tigers swept Cincinnati to open the season but needed 10 innings to get there on Sunday, as the pitching slipped a little after allowing just two combined runs in the first two games. On Tuesday, coach Monte Lee said there could be changes coming to the rotation — Davis Sharpe and Ty Olenchuk looked solid in their starts, but Caden Grice struggled, going just two innings and getting hit hard.

Sure enough, the rotation released Thursday pushed Olenchuk to Sunday and inserted grad student lefty Mat Clark on Saturday. Clark has never started for Clemson, but he has appeared in relief in each of the past three seasons, going a combined 7 2/3 shutout innings, giving up just three hits and collecting two wins.