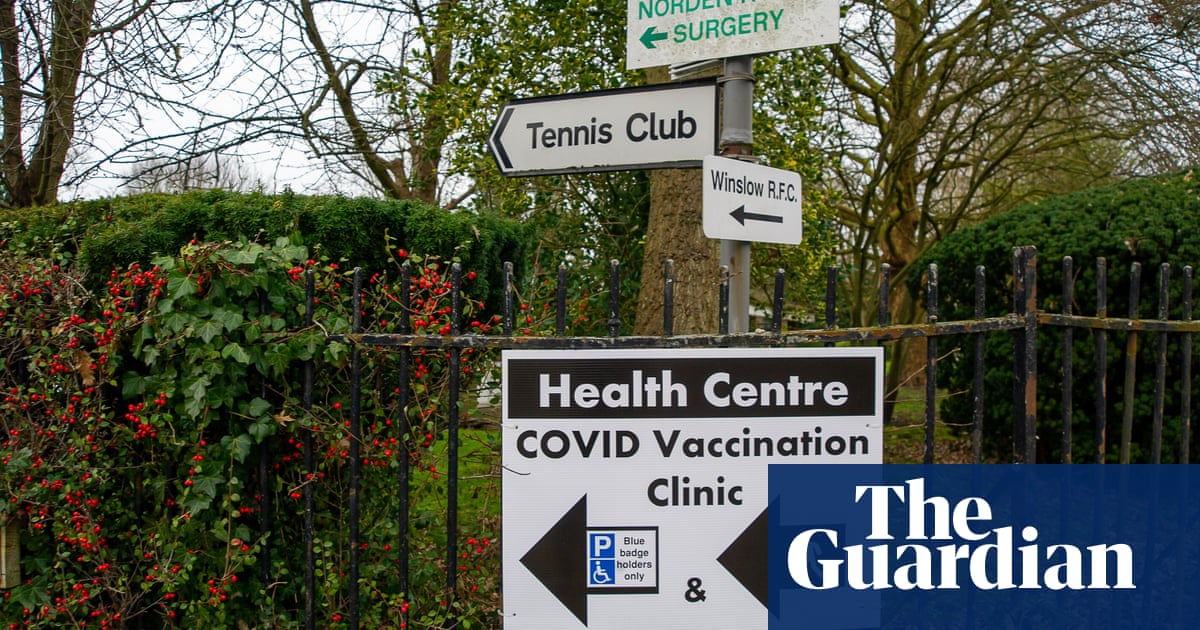 Ministers are being urged to offer vaccines door to door in hard-to-reach, deprived and minority ethnic communities amid fears that coronavirus could become a disease of poverty.

As leaders set out plans to reopen society, with one in three UK adults already having received their first dose, experts said the stark disparity in vaccine uptake in pockets of the country risked leading to the “vaccine-rich” being protected while the virus continued to circulate in disadvantaged areas.

Speaking to the Guardian, Halima Begum, the chief executive of the Runnymede Trust thinktank, said if people were not able or willing to go to GP surgeries, hospitals or vaccination centres, members of the NHS vaccine army should go to them.

Currently, a vaccine is offered to people in their own homes if they are registered with their GP as housebound or immobile. NHS England said in some areas GPs were increasing their efforts, highlighting the case of the London-based GP Dr Farzana Hussain, who has phoned every patient from her surgery who has been offered but not yet accepted their jab. But there are no plans to roll out a door-to-door vaccine scheme for those in hard-to-reach areas.

Begum said black, Asian and minority ethnic (BAME) communities were particularly vulnerable to being left unvaccinated. “We would urge the government to take the jab door to door where necessary,” she said. “Although there are a lot of vaccination centres in inner cities, a lot of elderly and immobile people are simply unable to get there.”

Data last week revealed a huge disparity in vaccine uptake between areas with high and low BAME populations. In Birmingham’s Sparkbrook and Balsall Heath East, an inner-city area home to a large Somali population and where 90% of residents are BAME, just 57% of over-80s had received their first jab compared with an estimated 93.4% nationally.

The ward is one of many in Birmingham with large BAME communities to have low vaccine take-up, compared with areas such as Rubery and Rednal, which has a BAME population of 9% and where 91% of over-80s had received their first dose.

Dr Mike Tildesley, a professor of infectious disease modelling at the University of Warwick and a member of the UK government’s SPI-M advisory group, said on Tuesday that failure to ensure all communities were protected could lead to a societal split.

“We know there are certain areas – in particularly inner-city areas, deprived areas – where vaccine uptake is not as high. This is a real concern … that we may end up in a situation where we have the ‘vaccine-rich’, as it were, who are able to access the vaccine, who have taken up the vaccine and are at much lower risk, and maybe the people in society who have not taken up the vaccine.

“Potentially these individuals could be clustered in particular parts of the country, and there is increased risk there,” he told BBC Radio 4.

Asked about the “alarming prospect” of society opening up thanks to the vaccine but Covid remaining as a “disease of the poor”, he said: “This is a real concern for me.”

Begum said the UK could not afford to have a vaccine divide. “Dr Tildesley is right with his predictions and confirms that those groups who are the poorest in society will be disproportionately impacted unless we focus on innovative ways to improve access to the vaccine,” she said.

“Because we have a universal health system in the UK, access to the vaccine is presumed as a given. But what people don’t see is the unequal access to health services which have led to less take-up of health services in deprived communities and areas across the UK.

“Usually, the affluent middle classes who can demand more from their health services will end up accessing services better, whereas those with less voice and who might experience … racism will experience barriers to health access.”

The Runnymede Trust said urgent practical solutions were needed and that going door to door giving people jabs in their homes should be considered. Failure to act could risk communities being blamed for allowing Covid to keep spreading, Begum said.

“Unless we can level up the huge inequalities in health access, including access to the vaccine, we stand the risk that our BAME communities will be blamed for not playing their part in the national Covid recovery,” she said.

Evidence that minority ethnic people are at elevated risk of contracting and dying from Covid compared with their white counterparts is well established. This month ministers were criticised for failing to act more urgently on coronavirus vaccine disparities after data showed that white people were almost twice as likely to have been vaccinated as black people among over-80s in England.

The Labour MP Apsana Begum said on-the-ground interventions would help improve low uptake. “Where we have really densely populated areas, which has been identified as a factor behind high transmission rates, it would make sense for mobile units to come out on to some of our estates and offer the vaccine there,” said Begum, the MP for Poplar and Limehouse in east London.

“That would enable us to really quickly inoculate populations and also means it’s readily there and everything possible has been done to offer and make the vaccine available. Having those direct conversations with people is helpful.”

Last month a Covid vaccination bus was launched in Crawley, West Sussex, to target hard-to-reach and vulnerable communities. The mobile centre, on a converted Metrobus, has been set up by a group of 44 GP services called the Alliance for Better Care.

The Birmingham Labour MP Shabana Mahmood said any in-person engagement needed to come from people who understood the communities they were speaking to, and warned against a “one-size-fits-all approach” for different groups.

After the Boris Johnson set out his roadmap out of lockdown for England on Monday, the health secretary, Matt Hancock, issued a renewed appeal for people to get the coronavirus jab. He said the government was working “incredibly hard” to ensure as many people as possible received the vaccine. “We want to see that vaccine uptake go as high as possible. But it’s absolutely on all of us to come forward and get the vaccine. It’s the right thing to do,” he said.

Some Tory backbenchers, who criticised the government over the slow pace of the easing of restrictions, said the country should not be “held back” by those who refused the vaccine.

“We know the uptake of the vaccine is over 90% in the top groups that have been vaccinated, [or even] above 95% [but the government has] assumed 15% of the population don’t take the vaccine,” Mark Harper, the chairman of the Covid Recovery Group of MPs, told LBC radio on Tuesday.

“I have two problems with that. One is that isn’t realistic, that’s not what’s happening. But secondly there is a real question about whether the rest of the country should be held back for two months because some people choose not to take the vaccine.”