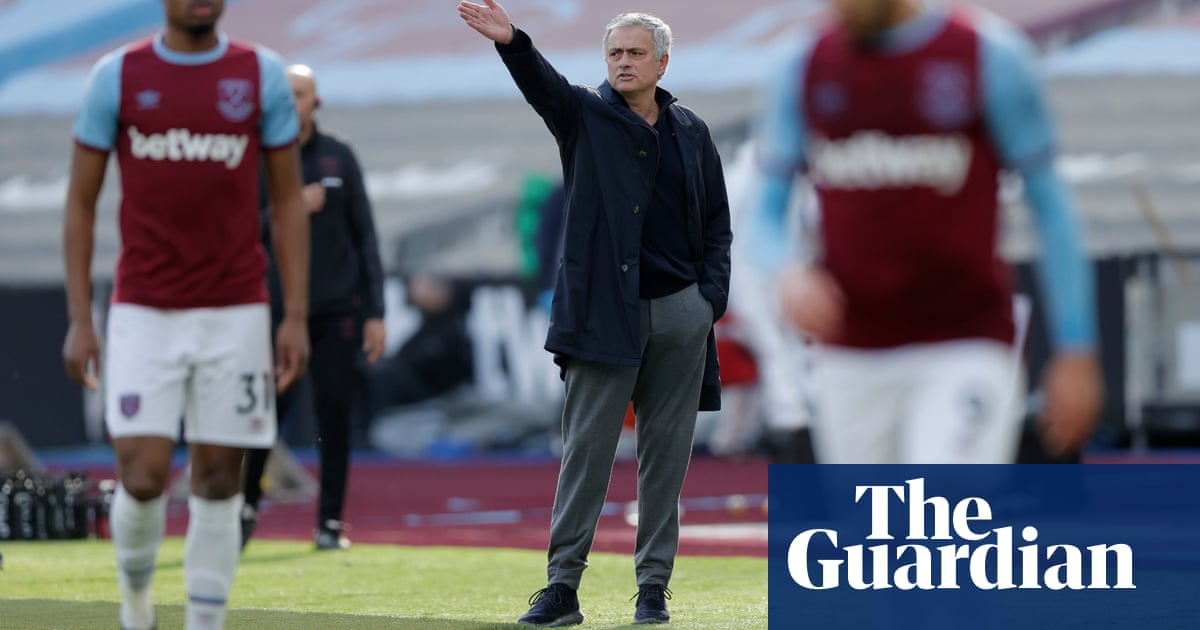 José Mourinho believes he is better equipped to turn around Tottenham’s crisis than he might have been in his younger, firebrand days and he remains convinced that he will leave a successful imprint at the club.

Mourinho’s team have taken 11 points from 12 Premier League games to sink to ninth in the table but he presented a cool front before Wednesday’s Europa League last-32, second-leg tie at home to Wolfsberger AC – Spurs are 4-1 up – suggesting that simple bad luck had been among the factors to conspire against them, most recently in Sunday’s 2-1 defeat at West Ham.

Mourinho took his players and staff back to the club’s training ground after the game for a debrief – an unusual move which sounded as if it ticked the boxes for a crisis meeting. But the left-back Ben Davies said it was “not a clear the air”, and Mourinho, who had brought up the detail himself, described it as an example of how hard everybody was working to find the answers.

“Thank God I am not the manager I was,” Mourinho said. “I would not be as calm and confident and in control of my emotions. I sometimes had problems – not in relation to results – and I reacted previously in a much more emotional way and instead of helping, I was creating a kind of conflict. To give you an example – I left Chelsea as a champion [in 2015].

“People with more experience are better equipped to cope with negative moments. I lose a game and I am not happy. But maturity helps. I believe we are going to improve and I will be in Tottenham’s history for the good reasons and not the bad reasons.”

Mourinho said after West Ham that the team had problems he could not resolve himself but he clarified it was more a reflection of the heat-of-the-moment exasperation he felt at how the footballing gods were against him. He also made the point that one of his managerial colleagues had been far more outspoken than he at the weekend. Chelsea’s Thomas Tuchel castigated one of his own players, Callum Hudson-Odoi, for a lack of application in the 1-1 draw at Southampton.

“One of my colleagues went a bit too far in his words but that’s another story,” Mourinho said. “Because it’s not José Mourinho, that’s not a problem. In relation to my words, it’s a big frustration to lose matches, especially matches like that one. When you play so well and you lose, you realise there are things that are not in your hands. We hit the post twice, you are waiting for a bit of luck and no. There is not a mistake that we make defensively when there is not a goal.”

Mourinho, who will pick a similar team against Wolfsberger to the one he started with in the first leg, said he continued to feel the support of the chairman, Daniel Levy.

“I never felt what coaches normally feel when the results are bad: being a lonely man,” Mourinho said. “I always felt supported. On one side, nobody is happy but on the other, nobody is depressed and I feel positive. My relationship [with Levy] is the same since day one, which is of respect and open communication. We share the feelings of not being happy with the results but this does not create a contradiction between us because we both feel exactly the same.”