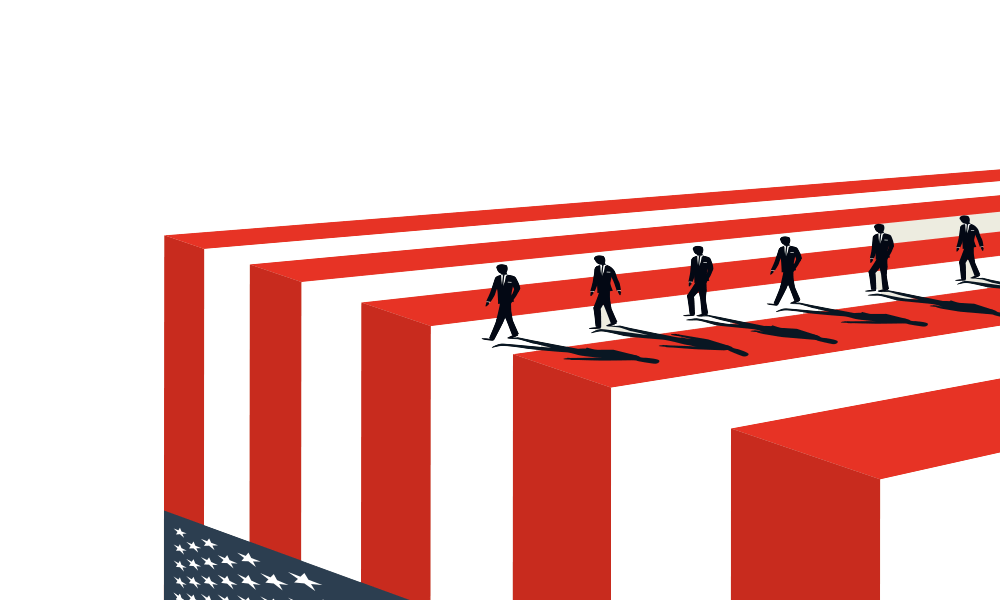 I’ve said the U.S. is caught in a debt death trap. Monetary policy won’t get us out because the velocity of money, the rate at which money changes hands, is dropping.

Printing more money alone will not change that.

Fiscal policy won’t work either because of high debt ratios. At current debt-to-GDP ratios, each additional dollar spent yields less than a dollar of growth. But because it must be borrowed, it does add a dollar to the debt. Debt becomes an actual drag on growth.

The ratio gets higher, and the situation grows more desperate. The economy barely grows at all while the debt mounts. You basically become Japan.

The debt-to-GDP ratio is about 130%. Before the pandemic, it was about 105% (the policy response to the pandemic caused the spike).

Already in the Danger Zone

Economists Ken Rogoff and Carmen Reinhart carried out a long historical survey going back 800 years, looking at individual countries, or empires in some cases, that have gone broke or defaulted on their debt.

They put the danger zone at a debt-to-GDP ratio of 90%. Once it reaches 90%, debt becomes a drag on growth.

Meanwhile, we’re looking at deficits of $1 trillion or more, long after the pandemic subsides.

In basic terms, the United States is going broke. We’re heading for a sovereign debt crisis.

I don’t say that for effect. I’m not looking to scare people or to make a splash. That’s just an honest assessment based on the numbers.

Tax cuts won’t bring us out of it, neither can structural changes to the economy. Both would help if done properly, but the problem is simply far too large.

So, an economic time bomb is ticking. Velocity is dropping. Debt is growing while growth is slowing. The explosion will come in the form of asset bubbles bursting and stocks crashing.

There’s no way out of the debt death trap. Or is there?

There is actually a way out. It’s the only solution left, really. And that’s inflation.

Deflation increases the real value of debt. With deflation, the value of money increases, making it more burdensome to pay off debt. This is why debtors hate deflation.

And guess who is the world’s largest debtor nation? That’s right, the U.S.

On the other hand, inflation decreases the real value of debt. It’s easier to pay down debt because you’re paying back debt with dollars that are less valuable than when you originally borrowed them.

But the Fed has failed to produce inflation for over a decade now, despite all the trillions of dollars it’s fabricated.

Then how can the government and the Fed produce inflation now?

The solution is to increase the price of gold in order to change inflationary expectations. That will increase money velocity and get the growth engine running again. The Fed could actually cause inflation in about 15 minutes if it used this method.

FDR did this to perfection in 1933, and his actions began to dig us out of the Great Depression. Jerome Powell, Biden and his Treasury Secretary Janet Yellen could do it again if they wanted to (assuming they know how, which is probably too much to assume).

But how could they increase the gold price to increase money velocity and change inflation expectations?

I’ve written about it before, but it bears revisiting, especially since there are newer readers who may be unfamiliar with it. Here’s how they can do it:

The Fed can call a board meeting, vote on a new policy, walk outside and announce to the world that effective immediately, the price of gold is $5,000 per ounce.

They could make that new price stick by using the Treasury’s gold in Fort Knox and the major U.S. bank gold dealers to conduct “open market operations” in gold.

The Fed would target the gold price rather than interest rates.

The point is to cause a generalized increase in the price level. A rise in the price of gold from $1,900 per ounce to $5,000 per ounce is a massive devaluation of the dollar when measured in the quantity of gold that one dollar can buy.

There it is — massive inflation in 15 minutes: the time it takes to vote on the new policy.

The first time this happened was in 1933 when President Franklin Roosevelt ordered an increase in the gold price from $20.67 per ounce to $35.00 per ounce, nearly a 75% rise in the dollar price of gold.

He did this to break the deflation of the Great Depression, and it succeeded. The economy grew strongly from 1934-36.

The second time was in the 1970s when Nixon ended the conversion of dollars into gold by U.S. trading partners. Nixon did not want inflation, but he got it.

History shows that raising the dollar price of gold is the quickest way to cause general inflation. If the markets don’t do it, the government can. It works every time.

Would the government and the Fed consider the gold trick I just described? They may have no choice ultimately.

The real message is that the solutions to current debt levels are inflationary. That means revaluing the dollar either through a higher gold price or marking the gold to market and giving the government money.

There are a lot of moving parts here, but they all point in one direction, which is higher inflation.

It’s the only way to keep America from going broke and falling into a sovereign debt crisis.

Unfortunately, it will also slash the value of the dollar. Your savings could quickly evaporate, and your standard of living will suffer.

That’s why I recommend you put around 10% — but no more than 20% — of your investable assets into physical gold.

I also recommend select gold stocks, which can massively leverage the spot price of gold to produce enormous returns.

That will give you the protection you need to safeguard your wealth and grow it.