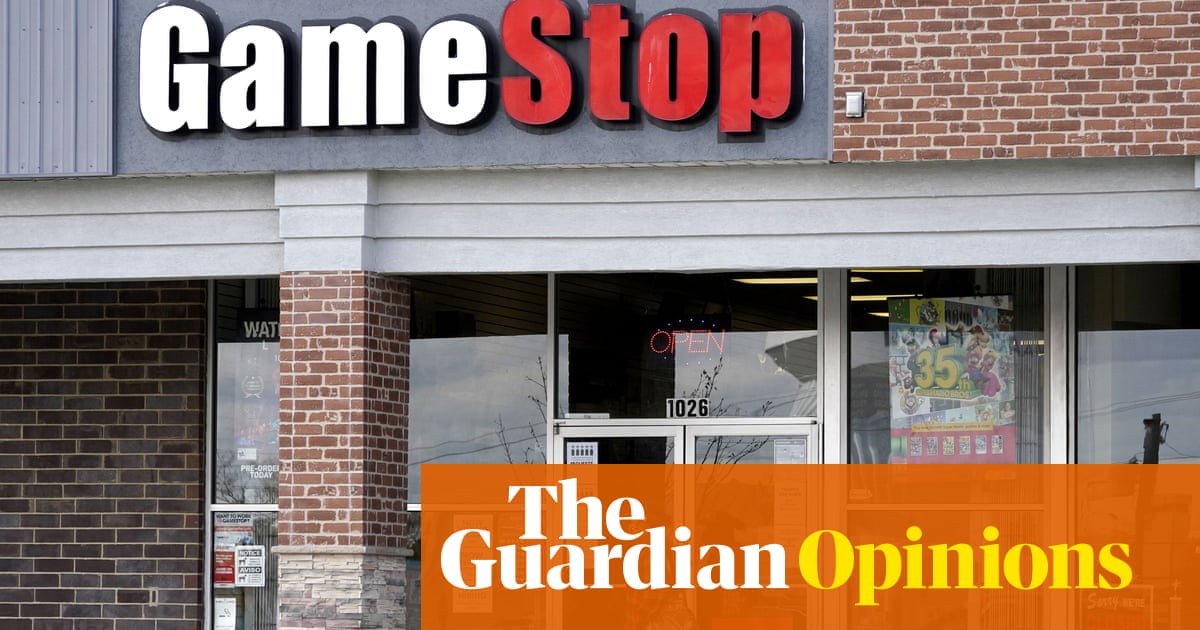 If you find trading bitcoin insufficiently hair-raising, try GameStop. It is the Texas-based video games retailer that will be hard to out-do as the stock market story of 2021. The share price was $19 at the start of this month but reached $330 in mid-afternoon on Wednesday in New York. There have been a few downwards lurches along the way, but the overall direction has been unsustainably upwards.

It must be unsustainable because nothing of note has happened to improve GameStop’s commercial prospects so radically. Exciting Playstation and X-Box releases may lie around the corner, but the company is still a bricks-and-mortar retailer struggling in an online age. Instead, punting on GameStop has become a video game in itself.

One could call the game “burn the bears” – the bears being short-selling hedge funds who had bet last year that the share price had further to fall. They reckoned without a Reddit forum called WallStreetBets, where amateur traders gather, in this case to spot a daring counter-attack – an uprising to propel the share price higher.

You have to admire the imagination. Short-sellers had bet so heavily on catastrophe for GameStop that they were vulnerable to any sudden reversal. In the old days, private punters would not have been able to assemble enough collective financial firepower to make a difference. Now, like the professionals, they have access to financial leverage in form of zero-commission derivatives – futures and options – to throw a few sticks of dynamite into the mix.

The explosion forced the hedge funds to cover their losses by buying stock, thereby adding to the upward momentum. The phenomenon is not new, but it’s hard to think of another example on this scale. Two hedge funds, at least, have been severely scalded, which, according to the chat on Reddit, was half the point of the exercise. It was about getting one over on Wall Street.

In that sense, it has succeeded to a degree that seemed impossible. And, since short-sellers are rarely popular, the world will not weep for the hedge fund losers. Instead, one reaction was to wonder where Reddit’s enterprising crew will strike next. BlackBerry, another heavily shorted stock, has seen similar dynamics. Even the 14% rise on Wednesday in Pearson, a member of the FTSE 100 index, was attributed to short-sellers running for the hills.

Where does the tale go next? Well, despite calls for regulators to investigate possible market manipulation, that plot-line looks a non-starter. Amateurs communicating in chatrooms to talk up a stock does not amount to a conspiracy; the practice is as old as the internet.

Instead, after a few more rounds of excitement, expect the game to stop in the traditional way: the late-comers to the party, and those staying until the end, will learn the hard way that a paper profit is not the same as cash.

The smart money will be out by then, of course. But if GameStock’s common sense value is $2bn-ish – and not the $24.5bn implied by the share price on Wednesday – the crash will be brutal.

Don’t blame AstraZeneca for the row with the EU

Which side – AstraZeneca or the European Union – would you guess has read the vaccine supply contract correctly? The bet here is that AstraZeneca’s Pascal Soriot, a chief executive who has always been commendably uninterested in spin, was merely delivering some hard truths to Brussels in his interview with Italian newspaper La Repubblica on Tuesday.

In short: AstraZeneca is obliged to use its “best effort” to meet the EU’s order on schedule and that, in the event of “glitches” in the dedicated EU plants, doses cannot be re-directed from the UK without the approval of the UK government. The EU’s position is that its own delivery terms are strict and, now that the EU plants can’t meet initial orders, UK sources should be tapped.

It is possible the company signed two contracts that were ambiguous on this critical point. But it seems unlikely. Biological vaccines are hard to produce, especially at speed. The event that has occurred – delays in one dedicated supply chain – will surely have been anticipated and covered.

It is also fairly clear the UK’s vaccine task force, which seems to have played a blinder, insisted that UK supplies should go to the UK first. Since that contract was signed three months before the EU one, AstraZeneca’s lawyers must have reflected the fact.

The contract will probably be leaked by somebody soon enough. In the meantime, sympathies lie with AstraZeneca. Alongside Oxford University, it has worked wonders and does not deserve to be a political football.