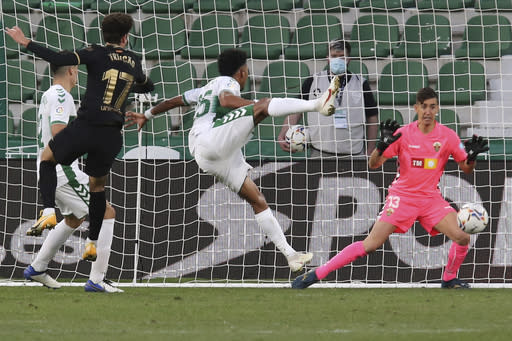 MADRID (AP) — Barcelona picked up its second win in a row without the suspended Lionel Messi, defeating Elche 2-0 to regain third place in the Spanish league on Sunday.

Frenkie de Jong scored in the 39th minute and set up Riqui Puig’s 89th-minute goal to give Barcelona its fourth league win in a row as Messi served the second of his two-game suspension for hitting an opponent.

The Catalan club moved a point in front of Sevilla, which on Saturday beat Cadiz 3-0. Barcelona was three points behind second-place Real Madrid – which won 4-1 at Alaves on Saturday – and seven points behind leader Atletico Madrid, which has two games in hand ahead of its home match against Valencia later Sunday.

It was the first time Barcelona won four consecutive league matches this season, with all four victories coming in away matches. It hasn’t lost in nine straight league games.

De Jong scored into the open net after the Elche defense failed to fully clear a cross from Martin Braithwaite to Antoine Griezmann inside the area. The Dutch midfielder made a well-placed cross for Puig’s late header for his first-ever Spanish league goal.

Marc-Andre Ter Stegen made a crucial foot-save to keep Barcelona ahead in the 56th after Elche forward Emiliano Rigoni entered the area in a one-on-one situation. The breakaway for the hosts was prompted after a blunder by Barcelona defender Oscar Mingueza, who gave the ball away near midfield.

Barcelona was coming off a 2-0 win over third-division club Cornella in the round of 32 of the Copa del Rey on Thursday, when Messi served the first match of his suspension for hitting an opponent in the team’s 3-2 loss to Athletic Bilbao in the Spanish Super Cup final on Jan. 17.

The Argentina playmaker will be allowed to return to action in Barcelona’s visit to Rayo Vallecano in the round of 16 of the Copa del Rey on Wednesday.

Elche, winless in its last 13 league games, was second-to-last in the 20-team standings.