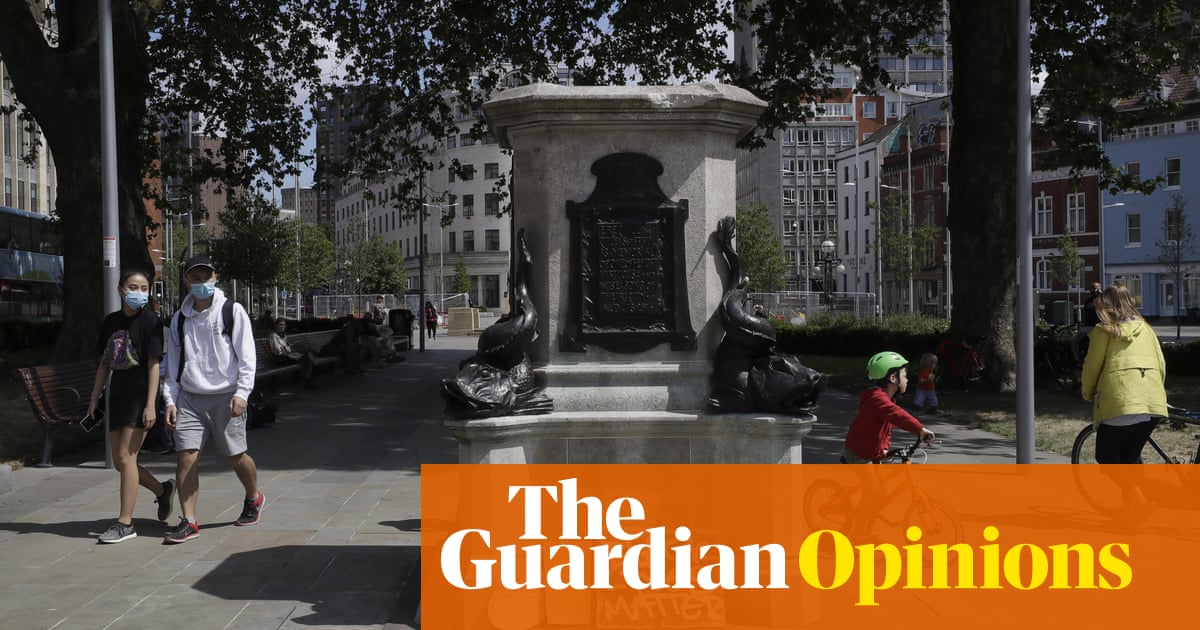 Few things are certain in these precarious times. But one thing has been easy to predict: that the government would continue with its crusade against an imaginary horde of “woke” iconoclasts intent on desecrating, tearing down, cancelling, censoring and otherwise destroying “our shared British history”.

Even sooner than I had expected – what with the demands of a real, non-imaginary pandemic – there comes from the pen of the communities secretary, Robert Jenrick, an article in the Sunday Telegraph that is either deliberately misleading, stupid, or both.

According to Jenrick, “baying mobs” have been seeking to erase British history by pulling down monuments and statues. A “revisionist purge” even has Nelson’s column in its sights, he claims. The angry throng of “mindless” destroyers includes Labour councillors, who love nothing better, in the communities secretary’s fantasy, than “ripping down heritage”. They are aided and abetted by Keir Starmer, he says. Good luck with substantiating that: the Labour leader seems punctilious about avoiding being drawn into any argument that has a hint of “culture war” about it – to a fault, some might say.

Jenrick draws particular attention to Birmingham City council, which he claims has “banned” new streets from being named after historic figures. This is simply untrue, as even a cursory glance at the council’s guidelines make clear. Jenrick singles out a clutch of new road names in the city, including Humanity Grove and Diversity Close. I don’t much like them either, on purely aesthetic grounds – attaching grand abstracts to roads in a housing development has to me a hint of bathos about it. Nevertheless, far from being imposed on locals by grim-faced Stalinists from the council, they are the result of a cheerful community competition, the names proposed to commemorate the stated values of that notorious hub of leftist agitation, the Commonwealth Games, which will take place in the city next year.

Have you seen any mobs ripping down British monuments or statues lately? Nor I. The only heritage- and democracy-disrespecting mobs I’ve heard tell of recently are those in the US who attacked the Capitol, vandalising its artworks – and they are not really the kind of crowds I believe the Tories have in mind. In the UK, precisely one prominent public sculpture was toppled by a crowd of protestors during last summer’s Black Lives Matter protests. This statue – Bristol’s monument to the slave trader Edward Colston – was always an outlier. It had been the subject of unsatisfactory, unresolved community debate for decades.

The toppling of the statue was, of course, illegal: four people will appear at Bristol magistrates’ court this month on charges of criminal damage. Jenrick, though, writes as if bands of statue-topplers were roaming the lands untouched by the law. “It is absurd and shameful that the statue of Winston Churchill should be questioned,” he writes, too, referring to the sculpture in Parliament Square.

Really? I thought we did questioning, in a democracy. Of course, the statue still stands, determinedly untoppled. The most distressing desecration of a monument last summer came not from BLM activists, but from far-right protesters who, while claiming to protect the Cenotaph from supposed (but actually nonexistent) “woke” attackers, chillingly performed Nazi salutes.

Still, it is to protect monuments against leftwing mobs and radical Labour councillors that the communities secretary is bringing forward new regulations that will oblige anyone seeking to remove or alter a historic plaque or monument to seek planning permission – which is already required, of course, if the monument is listed. The only real effect of this, I suspect, will be to create in planning departments an enormous tangle of red tape of the kind that Tories supposedly dislike so heartily.

What is happening in reality – and to a greater or lesser extent has been happening for years – is a reappraisal of what and who is celebrated in Britain’s public realm, as Britain gradually, painfully, and often inadequately, examines its colonial and imperial past. This is mostly being undertaken by the opposite of angry mobs – by incredibly worthy, rather dull committees set up by mayors and local authorities.

Doubtless it is annoying to some on the right that London’s Labour mayor, Sadiq Khan, has had the temerity to set up a Commission for Diversity in the Public Realm. One of its jobs will indeed to be to look at contested heritage. But there is absolutely no suggestion that this will involve ripping down a whole lot of monuments; in fact, the body will be more focused on commissioning new works. Indeed, the creation of “counter-memorials” is precisely what Historic England, the public body that protects England’s heritage, suggests as a possible strategy in the case of contested monuments.

What the Conservatives doggedly refuse to acknowledge is that a community deciding – or even a pressure group demanding – that a figure should no longer be revered on a plinth in the public realm has nothing to do with “censoring” history or pretending the events of the past did not happen. They also fail to grasp that the past exists in dialogue with the present, and that our relationship with it is not static, but dynamic and contextual.

The Tories claim to love history and to embrace complexity, but they seem attached to a peculiarly simplistic and moralistic vision of it. History isn’t something that you are either (or only) “proud of” or “ashamed of”. Nor is it some dead, unchanging object. It is rich, deep, contradictory, and contains multitudes. To do history is to contest history. History is inquiry. That’s what the word means, from the ancient Greek verb historeo, to learn by inquiry. Anything else is myth.