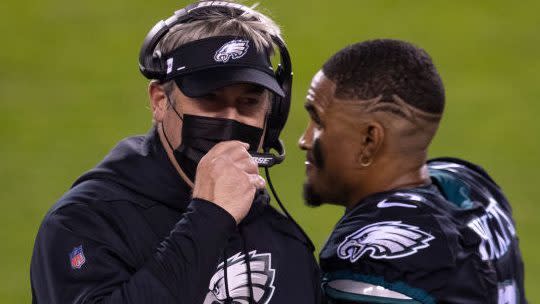 Eagles owner Jeffrey Lurie’s decision to fire coach Doug Pederson may have stemmed from a difference of opinion about who should be the team’s starting quarterback going forward.

Pederson thinks Jalen Hurts gives the Eagles the best chance to win, and Lurie wants to salvage Carson Wentz, according to Troy Aikman, who said on Michael Irvin’s podcast that he spoke to Pederson after Pederson was fired.

“Jeffrey Lurie has paid a lot of money to Carson Wentz, and they’re on the hook with him, and can’t get out of that contract right away,” Aikman said, via the Philadelphia Inquirer. “It’s my belief that Doug Pederson felt that Jalen Hurts probably [should be] the quarterback going forward. But how does that mesh [with Wentz’s contract situation]? I believe it all came down to how they’re going to handle Carson Wentz.”

Aikman said Pederson’s firing was “complex” and not just about the quarterback position. But Wentz’s regression, and the emergence of Hurts, is a major issue the Eagles have to address going forward. And if Lurie and Pederson weren’t on the same page, one of them was going to have to go. And it wasn’t going to be the owner.