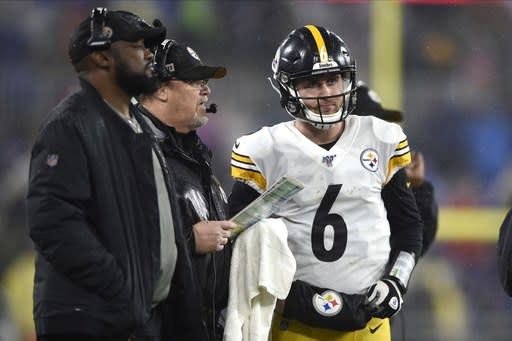 The team announced Thursday it would not renew the contracts of Fichtner, offensive line coach Shaun Sarrett, and secondary coach Tom Bradley following a 48-37 loss to Cleveland on Sunday night.

Head coach Mike Tomlin hinted at major changes on Wednesday after Pittsburgh dropped five of its final six games following an 11-0 start and didn’t waste time getting started. While quarterback Ben Roethlisberger played well for long stretches in his return from right elbow surgery, the running game disappeared over the second half of the season and finished dead last in the NFL in both yards rushing and yards per carry.

”I think when you are dead last in anything, it is (personnel and scheme),” Tomlin said. ”We better assess it as such. We will not accept our current position in that area. We cannot. We have to attack that and we will.”

That inability to generate any sense of balance allowed opponents to key on Pittsburgh’s short passing game. Roethlisberger threw at least one interception in six of his last seven starts, including four against the Browns.

The decision ends a long professional relationship between Tomlin and Fichtner. The two met as assistants at Arkansas State in the late 1990s and Tomlin hired Fichtner as a wide receivers coach shortly after replacing Bill Cowher in January 2007. Fichtner was promoted to quarterbacks coach in 2010 before being elevated to offensive coordinator three years ago after the team let go of Todd Haley following a playoff loss to Jacksonville.

Pittsburgh’s offense finished fourth in the league during Fichtner’s first season calling the plays in 2018, thanks in large part to the highly productive partnership between Roethlisberger and wide receiver Antonio Brown. The offense took a significant and expected step backward in 2019 with Roethlisberger missing all but six quarters of the season.

Roethlisberger returned to form this season and briefly thrust himself into the Most Valuable Player discussion as the Steelers put together the best start in franchise history. Yet even as Pittsburgh won games, there were signs the offense continued to have issues, particularly in the running game. The Steelers relied heavily on short fields generated by turnovers created by the defense, and when that stopped happening with regularity over the second half of the year, the offense began to regress.

Pittsburgh averaged 29.8 points during its first 10 games and just 22.1 over its final seven, numbers boosted a bit by COVID-19-ravaged Cleveland going to a prevent defense after taking a four-touchdown lead.

The decision could play a factor in whether Roethlisberger comes back for an 18th season. Roethlisberger is under contract through next season with a $41.25 million salary-cap hit. While he expressed interest in returning and Tomlin said it’s ”reasonable” to expect there’s a ”chance” Roethlisberger could be back, Roethlisberger and Fichtner, whom Roethlisberger often referred to as ”Coach Randy” are close.

Sarrett joined the Steelers in 2012 and was promoted in January 2019 to replace Hall of Fame offensive line coach Mike Munchak, who spent five years building Pittsburgh’s front into one of the best in the NFL. Munchak left for the same job in Denver, but Sarrett struggled to get an aging line to play with the physicality required to help create holes for running backs James Conner and Benny Snell Jr., among others.

While the group excelled in pass protection – Roethlisberger was sacked just 13 times in 621 drop backs this season – it never found any sense of momentum running the ball after a solid start. Pittsburgh topped 100 yards rushing just once over its final 12 games.

Whoever replaces Sarrett will have to find a way to deal with a line in flux. Left tackle Alejandro Villanueva and left guard Matt Feiler both become free agents in March, and it’s unclear whether perennial Pro Bowl center Maurkice Pouncey will return.

Bradley joined the Steelers in January 2018, taking over after Carnell Lake stepped away. Pittsburgh’s secondary has been solid during Bradley’s tenure, but the job may have become a bit redundant after Pittsburgh hired Teryl Austin to serve as a senior defensive assistant/secondary coach two years ago.