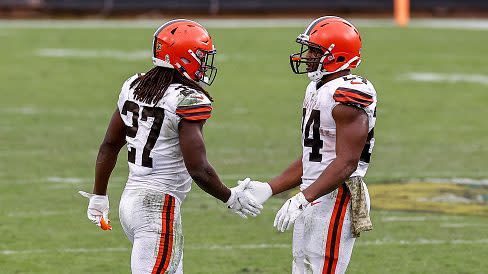 The Browns didn’t have the Chiefs on their schedule in the regular season, but one player has apparently been visualizing the upcoming matchup for a while.

Kansas City cut Kareem Hunt back in Nov. 2018 when video surfaced of the running back shoving and kicking a woman. He’s said this week’s game between Cleveland and his former team is “personal,” though there’s been nothing but well wishes and praise coming from the Chiefs all week.

Still, fellow running back Nick Chubb said Hunt has long been envisioning a return trip to where his pro career began.

“Kareem talked about this game all year like he knew it was going to happen,” Chubb said in his Wednesday press conference. “He’s excited for it. I’m excited for him. I’m excited to watch him go out there and play. He’s ready for it.”

Hunt rushed for 48 yards and a pair of touchdowns in Cleveland’s 48-37 win over Pittsburgh last week. He’d certainly like to score at least another two TDs at Arrowhead on Sunday.

Nick Chubb: Kareem Hunt has been talking all year like Chiefs matchup would happen originally appeared on Pro Football Talk