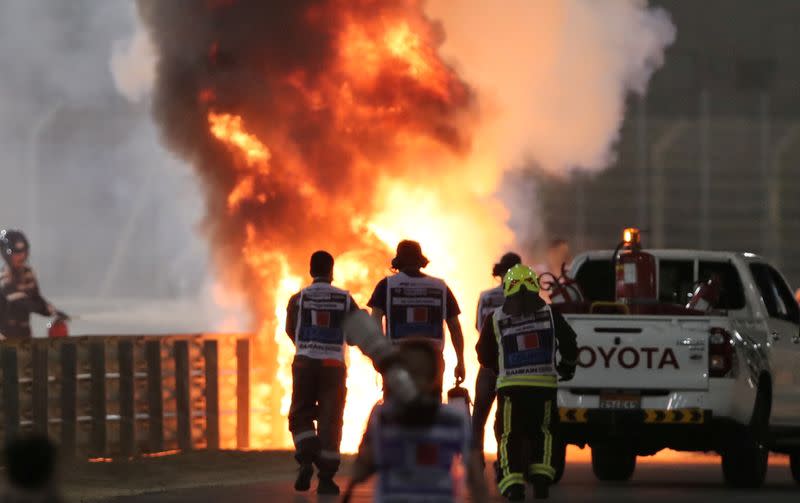 (Reuters) – Formula One’s governing body said it had opened an investigation into Romain Grosjean’s Bahrain Grand Prix crash on Thursday as the French driver hailed those who helped him escape the fireball.

Grosjean suffered burns to his hands after his Haas car split in two, penetrating a metal barrier and erupting in flames, in Sunday’s race.

The Frenchman left hospital on Wednesday and in an Instagram post accompanying video footage pointed to “the moment I realized I was going to live’.

He highlighted the ‘professionalism’ of the marshal with the extinguisher and FIA doctor Ian Roberts.

“I told him he was a hero, he went into the fire as much as he could to save me,” he said of Roberts.

“I felt Ian’s hands pulling me over the barrier and knew I was safe. I remember every second of it and life will never be the same again, but I’m sure for the best,” added the driver.

“I met with death and that is the worst feeling I ever had. But I’m alive and will enjoy every second of life and every small win in a much better way from now on.”

It will look at all safety devices, how the safety barrier performed and the role of track marshals and medical intervention team.

The body said it would work with Formula One, Haas and the Grand Prix Drivers’ Association (GPDA), who had already been contacted for input. Grosjean is one of the three GPDA directors.

The FIA said immediately after Sunday’s accident that the impact measured more than 50G, while Haas said the car’s last recorded speed was 221kph.

“With so much data available in Formula One, it allows us to accurately determine every element of what occurred and this work has already begun,” said FIA safety director Adam Baker.

“We take this research very seriously and will follow a rigorous process to find out exactly what happened before proposing potential improvements.”

(Reporting by Alan Baldwin in London, editing by Simon Cameron-Moore)