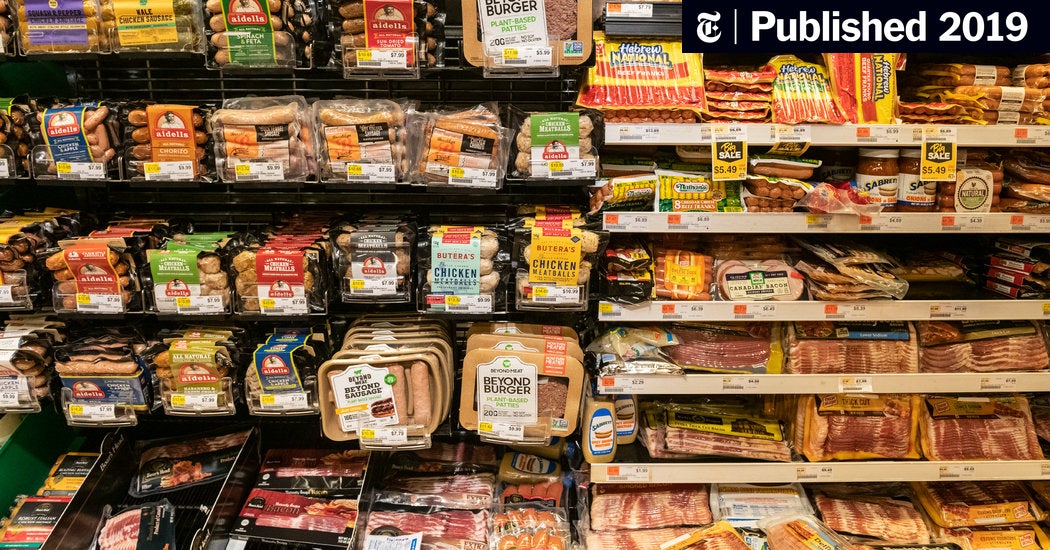 The meat industry has a warning for consumers: Beware of plant-based meat.

That is the message behind a marketing campaign by the Center for Consumer Freedom, a public relations firm whose financial supporters have included meat producers and others in the food industry. In recent weeks the group has placed full-page ads in The New York Times and other newspapers raising health concerns about plant-based meat substitutes like the Impossible Burger and the Beyond Burger, which are designed to look, taste and even appear to bleed like real meat.

The ads call them “ultra-processed imitations” with numerous ingredients. “What’s hiding in your plant-based meat?” asks one ad featuring a sad face made of two patties and sausage. Another directs readers to a site that compares plant-based burgers to dog food. In November, the group’s managing director, Will Coggin, wrote an opinion piece in USA Today that labeled fake meats as ultra-processed foods that can spur weight gain, although the research on processed foods has not included plant-based meats. A few days later, the center’s executive director, Rick Berman, wrote an op-ed in The Wall Street Journal criticizing plant-based meats as highly processed and no healthier than meat. Its headline: “‘Plant-Based Meat’ Is All Hat and No Cattle.”

Impossible Foods, which makes a popular plant-based burger, said the campaign was misleading and fear-mongering. The company says plant-based meat alternatives are better for consumers and better for the planet, requiring less land and water and producing fewer greenhouse gas emissions than meat from cattle. The new “disinformation” campaign, they say, is a sign that Impossible Foods’ mission — to disrupt the meat industry and replace animals in the food system — is working. “It’s a point of pride to have that organization come after us,” said Pat Brown, the company’s chief executive. “It’s hard to imagine a stronger endorsement.” (The Center for Consumer Freedom did not respond to requests for an interview.)

Unlike other vegetarian meat substitutes, the new plant-based burgers are winning over meat lovers. The market research firm NPD Group says that 90 percent of the customers purchasing them are meat-eaters who believe the products are more healthful and better for the environment, said Darren Seifer, an analyst at NPD, which recently predicted that plant-based meats will have staying power because of their popularity with millennials.

“The two big brands, Beyond and Impossible, have replicated the burger experience without having to sacrifice the taste of the burger,” he said. “So now a lot of consumers feel like they have a healthier option, they are reducing the amount of meat they consume, and they just feel better about that.”

But are plant-based meats really better for you than meat? It depends on how you eat them, said Dr. Frank Hu, chairman of the nutrition department at the Harvard T.H. Chan School of Public Health. Replacing a hamburger with a plant burger is not an improvement in diet quality if you chase it with French fries and a sugar-laden soda, Dr. Hu said.

For consumers trying to choose the healthiest option, Dr. Hu said studies comparing the metabolic effects of eating beef burgers versus plant burgers are currently underway. In the meantime, he considers the meat substitutes “transitional foods” for people who are trying to adopt more healthful diets.

In August, Dr. Hu, along with a group of health and climate experts, published a report in JAMA that explored whether plant-based meats can be part of a “healthy low-carbon diet.” Studies show that replacing red meat with nuts, legumes and other plant foods can lower mortality and chronic disease risk, but it’s not possible to extrapolate that processed burgers made with purified soy or pea protein will have the same health benefits, said Dr. Hu.

Impossible Foods and Beyond Meat say the building blocks of their burgers are plants. The Beyond Burger has about 18 ingredients, including purified pea protein, coconut and canola oils, rice protein, potato starch and beet juice extract for coloring. Beyond Meat says it uses no genetically modified or artificially produced ingredients.

The Impossible Burger is made with similar basic ingredients but it gets its protein largely from soy and potato, and it uses an iron-containing compound from soy called heme to enhance the burger’s meaty flavor. Both products use methylcellulose, a plant derivative commonly used in sauces and ice cream, as a binder.

Compared to a beef patty, the Impossible and Beyond burgers have similar amounts of protein and calories, with less saturated fat and no cholesterol. They also contain fiber; real meat does not. But compared to real beef, the two plant-based burgers are considerably higher in sodium, containing about 16 percent of the recommended daily value. An uncooked four-ounce beef patty has about 75 milligrams of sodium, compared to 370 milligrams of sodium in the Impossible Burger and 390 milligrams in the Beyond Burger.

This fall, Burger King said it had its most successful quarter in four years, driven by sales of its plant-based Impossible Whopper. Dunkin’ Donuts announced it was rolling out a breakfast sandwich made with Beyond Meat sausages in 9,000 of its stores after a successful trial run in New York City. More than 50,000 grocery stores and restaurants, including fast food chains like Subway, White Castle, KFC and Carl’s Jr., carry products from Beyond Meat or Impossible Foods.

While meat consumption in America is at an all-time high, many Americans have shifted from eating beef to poultry. In the past three decades, beef intake has fallen by about a third, while chicken intake has more than doubled and pork intake has remained fairly steady. Studies show that cost, convenience and health concerns are among the top reasons Americans have cut back on beef.

But the health messages about red meat have been confusing. Earlier this year, a group of scientists challenged decades of nutrition advice, saying that warnings linking red meat consumption to heart disease and cancer are not backed by strong scientific evidence, though it was later revealed that the study’s lead author had past research ties to an industry group whose members include fast food companies and a beef processor.

Meat producers are taking the fight against fake meat to lawmakers. At least 25 states have introduced bills making it illegal to use the words “beef” or “meat” on products made from plant ingredients or cultured meat that is grown in a lab. Missouri became the first state to pass such a law last year, which was initially proposed by the Missouri Cattlemen’s Association.

In October, Representative Roger Marshall, a Republican from Kansas and the top recipient of livestock industry donations in the House, introduced a federal bill that would require companies to put the word “imitation” on their plant-based meat products. The bill calls for the products to carry a statement on their packages “that clearly indicates the product is not derived from or does not contain meat.”

Dr. Marshall, an obstetrician, said he introduced the bill after hearing from constituents. Patients of his told him they were confused about the health benefits of plant-based beef substitutes, and beef producers told him they were frustrated that the products are sold in grocery stores next to ground beef. “Kansas has a very large beef industry and they said, ‘Why are we allowing this fake meat in the meat department?’” he said.

Mr. Brown, the chief executive of Impossible Foods, said his company’s mission is not to convince consumers that the Impossible Burger is the most nutritious food they can eat. It is simply to persuade people who want a “cow burger” to eat an Impossible Burger instead.

With contributions from Tara Parker-Pope