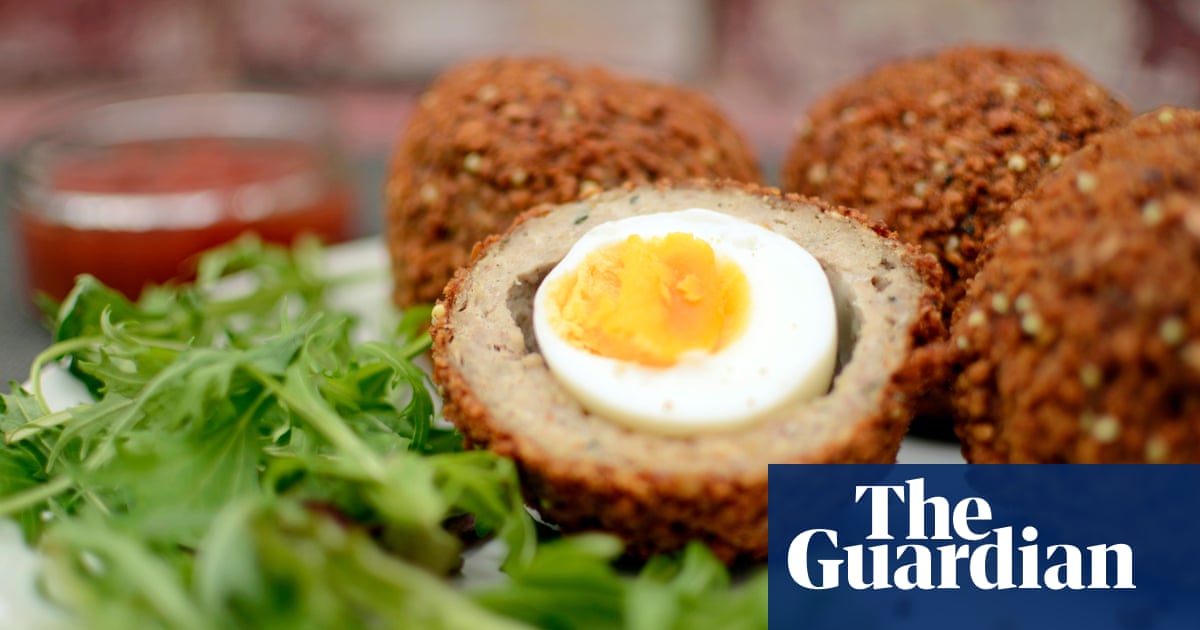 A Cornish pasty isn’t, unless it’s with chips.

A single slice of pizza wasn’t, but then it was.

And now, the environment secretary, George Eustice, has decreed, a scotch egg probably is, because it’s a starter, apparently.

The question, of course, is what constitutes a substantial meal: once a dilemma for dieters looking for an excuse for that mid-afternoon pork pie, now a matter of national importance.

Pubs in tier 2 areas will only be allowed to serve drinks if they come alongside a proper feed, the government has said, leading to some confusion over where, exactly, the line is between a bar snack and a feast. For pork scratchings or a Sunday roast, the answer is obvious. So, Eustice was asked on LBC on Monday, what of the scotch egg?

“I think a Scotch egg probably would count as a substantial meal if there were table service,” Eustice improvised. “Often that might be as a starter, but yes, I think it would.” But, of course, it’s not as simple as that.

“It depends on how they’re made,” said David Laing, co-owner of North Yorkshire-based specialists The Clucking Pig.

“A lot of them are very quick, very commercial, cheap stuff. But the likes of ours are a proper meal. You get a large free-range egg, 90g of rare breed Berkshire pork, fresh breadcrumbs, it’s probably a three-and-a-half inch circumference. The royal family have had ours – they’re very filling. A lot of people have to halve them.”

If the image of the Queen being so stuffed she has to hand Philip her leftovers doesn’t persuade you, Laing adds that many of his deli and pub customers serve theirs with sweet potato fries and salad. Plus, “you can definitely eat it with a knife and fork. I would recommend a serrated knife.”

Adam Coghlan, editor of food and restaurant news website Eater London, is less convinced of the sit-down credentials of a classically handheld foodstuff. “Of course it isn’t a meal,” he said.

“I mean, I suppose there are some people who might have a scotch egg for lunch sometimes, but that’s not really the rule, is it? Pubs are really annoyed they can’t open, and anything they can do that allows them to they’re going to attempt.”

Yes, there might be some places where a gastro-egg comes as a main, “but those places will be opening anyway. It’s the places with scampi fries and peanuts that are going to use this as an excuse to serve loads of pints of Fosters. It’s a perfect example of how difficult all of this is going to be to enforce or police.”

For Oisin Rogers, landlord of the Windmill and the Guinea Grill pubs in Mayfair, London and founder of the hotly contested Scotch Egg Challenge, an attempt at definition leads to a kind of philosophical limbo. “I can’t answer that question, I just can’t,” he said.

“The brilliant thing about them is you can have a pint in one hand and the egg in the other. But it can be a meal too. You get a softboiled egg and you put it inside a sausage, who doesn’t want that?”

Even before the scotch egg question arose, ministers and officials were having a hard time providing clarity on the wider point.

It was the housing secretary, Robert Jenrick, who declared that a pasty counted only if it came with sides, which is a frankly bizarre way to eat a pasty; the pizza dilemma, meanwhile, left police in Manchester in knots when they stopped local favourite Common from serving single slices that the venue described as “fucking massive”, only to eventually back down.

In the end, Rogers views the question as a sideshow. “Rather than going down this rabbit hole, the real point of the guidance is to stop people having a casual drink without eating.

“We will make sure that people sit down in a safe environment, well spaced out, servers in masks. If you take those precautions, it’s perfectly safe to have something off a plate.”