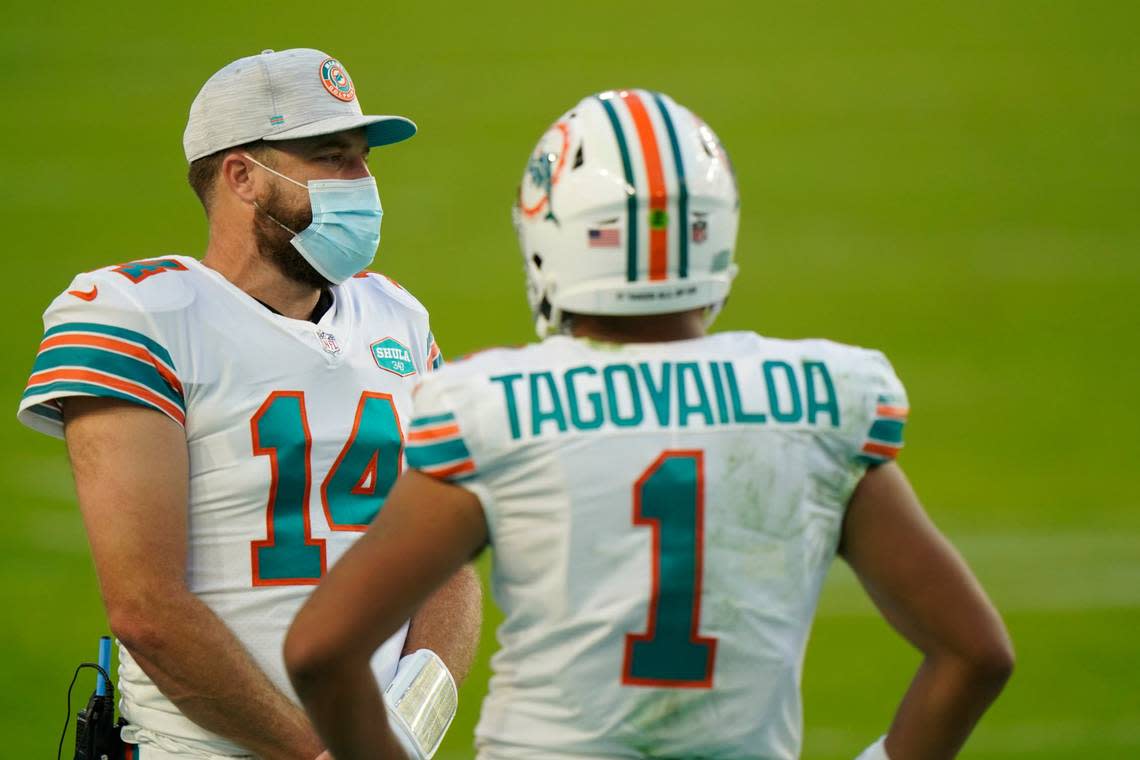 None of the Miami Dolphins’ past six games has been televised in more than a quarter of the country. But Miami soon will get the type of national exposure earned by a 7-4 record.

On Monday, the Dolphins’ game at Las Vegas was set for 8:15 p.m. for Saturday, Dec. 26, with NFL Network televising nationally.

In the league’s original schedule, the Dolphins’ game had been one of five games designated by the league as possibilities to be moved from Sunday, Dec. 27 to Saturday, Dec. 26.

Two others also were shifted to Saturday, Dec. 26: Tampa Bay-Detroit (at 1 p.m. on NFL Network) and Arizona-San Francisco (at 4:30 p.m., but available outside of those two markets only on Amazon Prime’s streaming service).

Browns-Jets and Broncos-Chargers will remain on Sunday, Dec. 27 as regional CBS telecasts.

Miami’s next marquee game — against Kansas City on Dec. 13 — won’t be flexed to NBC’s Sunday Night Football because NBC has a strong game that night (Buffalo-Pittsburgh). But CBS’ Jim Nantz suggested on air on Sunday that he and Tony Romo would call that 1 p.m. Dolphins game, which will be televised in a significant part of the country.

News and notes on every position in the wake of Miami’s 20-3 win at the New York Jets:

▪ Quarterback: The Dolphins will evaluate Tua Tagovailoa at practice Wednesday through Friday to determine if his swollen left thumb is strong enough to play Sunday against visiting Cincinnati. Flores said that Tagovailoa is the starter if healthy. Rookie Reid Sinnett returned to the practice squad on Monday after being “elevated” to serve as Ryan Fitzpatrick’s backup on Sunday.

As a COVID-19 precaution following the holiday weekend, the NFL banned teams from having players practice on Monday and Tuesday.

And this is happening behind the scenes: Coinciding with a visit to Dolphins headquarters, veteran Jake Rudock on Friday began the NFL-required process of taking five COVID-19 tests over five days. When those tests are completed, the Dolphins then will decide whether to sign him to their practice squad and whether to leave him in quarantine as protection in case one or more of Miami’s quarterbacks contract COVID-19.

Dolphins coach Brian Flores said earlier this season that the team had considered putting a QB in permanent quarantine this season, but Miami ultimately didn’t do it. That is now more of a consideration across the league after Denver was forced to play without a natural quarterback in a loss to the Saints on Sunday.

Rudock began the season on Miami’s practice squad — where he spent all of last season — and was later cut but has visited the Dolphins three times since.

▪ Running back: DeAndre Washington played the most offensive snaps (34), which was largely the result of Matt Breida (23 snaps) and Patrick Laird (10) seeing their playing time drop after those two players fumbled.

Washington — who had only three carries for Kansas City before his Nov. 3 trade to Miami — had 49 yards on 13 carries.

▪ Tight end: For the second week in a row, Mike Gesicki played much more than the other tight ends — which hadn’t been the case earlier in the season. Gesicki played 50 snaps on offense, Durham Smythe 30 and Adam Shaheen 25. Both Gesicki and Shaheen caught touchdown passes.

Ogbah has had a very good season, but PFF said he was Miami’s worst player on defense on Sunday, and the Dolphins curiously put their top pass rusher in pass coverage on one play in which he allowed a 30-yard completion to receiver Denzel Mims.

Meanwhile, Davis continued to get high marks from PFF, ranking sixth among all Miami defenders against the Jets after ranking No. 1 the previous two games.

Howard allowed only 3 of 10 passes in his coverage area to be caught, for 37 yards and the interceptions.

The Dolphins are expected to sign veteran cornerback Akeem King to their practice squad. He has appeared in 34 games — and started four — for the Falcons and Seahawks between 2017 and 2019.