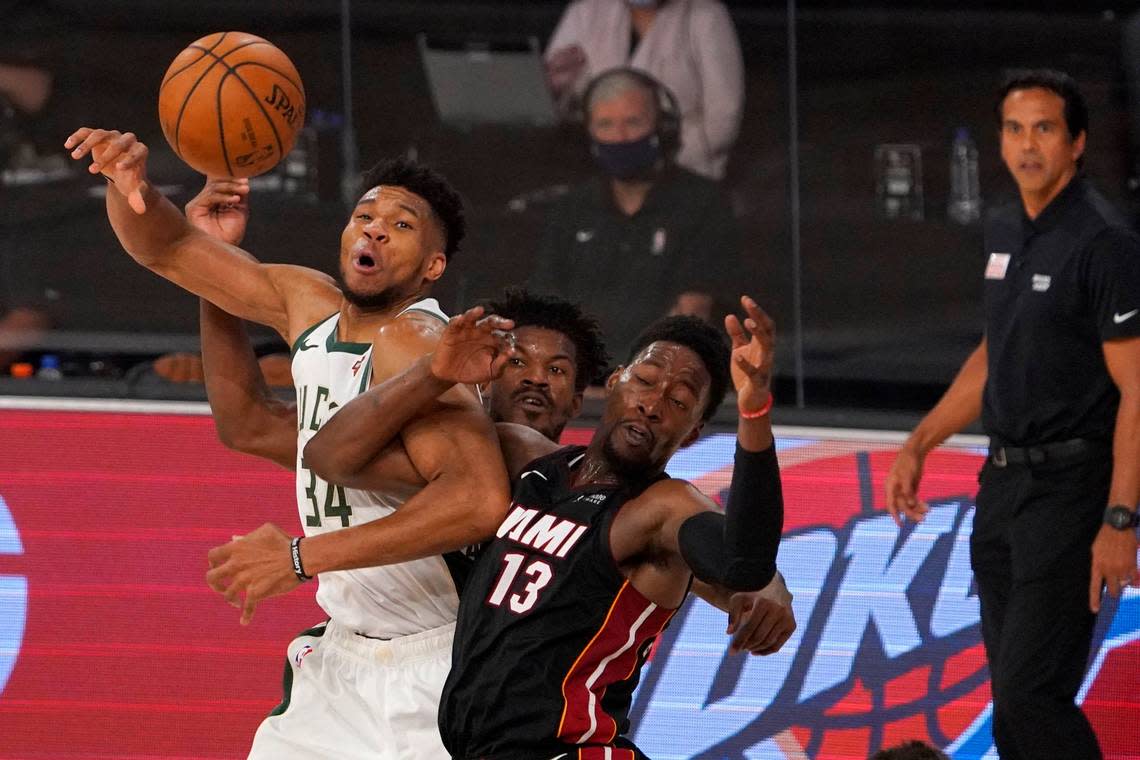 We explained here how the Miami Heat can acquire another All-Star player in the next year even after Bam Adebayo’s max extension left Miami without the cap space to sign a max free agent next summer.

But greedy Heat fans eager to build a super power might also ask this question: Is it possible to add not only one more All-Star player — but two — before the 2021-22 season?

Spoiler alert: It is, but it would require fortuitous timing, two stars wanting to do it, willingness of other teams to cooperate and acceptance of what could be a luxury tax bill for years to come. And it would need to be done through trades.

What about the Heat getting Giannis Antetokounmpo and either potential 2021 unrestricted free agents Victor Oladipo or Jrue Holiday or perhaps even De’Aaron Fox or Donovan Mitchell if either of those two players unexpectedly becomes unhappy eventually after signing max extensions last week?

It’s absolutely possible, though Miami would need other teams to cooperate, which is the unknown variable.

Cashing the ultimate lottery ticket — procuring both Antetokounmpo and Bradley Beal — would be possible within cap rules but difficult to pull off because the Heat likely wouldn’t have the assets to satisfy both the Bucks and Wizards in separate trades.

Antetokounmpo would be an unrestricted free agent next summer if he does not sign a max extension with the Milwaukee Bucks by Dec. 21. It’s unclear if he will.

Here’s how the Heat could create a team with four All Stars (Jimmy Butler, Adebayo and two new ones):

▪ Step one: Trade for an All-Star-caliber player in the final year of his contract before this upcoming season’s trade deadline, but try not to relinquish Tyler Herro in the deal because you might need him in a trade for a star free agent next summer.

If Indiana’s Oladipo (who can be unrestricted in 2021) hypothetically tells the Pacers he won’t be re-signing there next summer, Miami could offer Duncan Robinson and/or Kendrick Nunn, Kelly Olynyk’s expiring contract and another piece before the trade deadline.

Keep in mind that Miami is not permitted to trade any future first-round pick because of restrictions tied to OKC already owning two future Heat first-rounders. But that would change if OKC agrees to unlock the 2023 pick; doing so would require the Heat to waive lottery restrictions on that first-round draft choice.

Without OKC and the Heat agreeing to that, Miami cannot trade a future first-round draft choice until after the 2021 NBA draft. And that pick would be a 2028 first-rounder.

If Miami could acquire Oladipo or another star before this upcoming season’s trade deadline, Miami would preserve that player’s Bird Rights next offseason and could exceed the cap to re-sign him.

It’s difficult to see a path to acquire Holiday — and certainly not Beal — without relinquishing Herro.

▪ Step two: If Antetokounmpo doesn’t sign a max extension with Milwaukee before the Dec. 21 deadline, convince him to sign here next offseason and then orchestrate that move with a sign-and-trade with Milwaukee, which likely would demand Herro in exchange for taking on $25 million plus in cap-facilitating contracts (perhaps Andre Iguodala, Meyers Leonard) and helping the Heat build a super team.

But I’m not sure why Milwaukee would agree to taking on that much money from the Heat in exchange for a player (Nunn or Robinson) that it could sign to an offer sheet in restricted free agency next summer, anyway.

The Bucks could tell the Heat this: “If you don’t give us Herro, then forget it. Let Giannis go sign with a team that has cap space.”

Keep in mind that teams over the salary cap can receive contracts worth no more than 125 percent plus $100,000 compared to what they send out.

The dream scenario of acquiring Beal and Antetokounmpo also hypothetically can be achieved, but would need not only both players wanting to come here (Beal via trade, Antetokounmpo via sign-and-trade in free agency), but the Wizards and Bucks accepting Heat trade offers. And because Miami cannot clone Herro, it would seem unlikely the Heat would be able to satisfy both teams. One, certainly. But both? The odds are against that.

A Beal deal likely would require Herro and Robinson or Precious Achiuwa — among other pieces such as Kelly Olynyk to make it work from a cap standpoint — because the Heat wouldn’t be able to offer a future first-rounder until after the 2021 draft, unless OKC agrees to unlock the 2023 pick, which permits Miami to trade its 2025 first-rounder. That would leave Miami with few assets to offer Milwaukee in an Antetokounmpo sign-and-trade scenario.

So the Beal/Antetokounmpo scenario for the Heat not only requires Giannis wanting to come to Miami, but the Bucks accepting a future first-rounder plus Robinson and/or Nunn or Achiuwa — if Herro is used to acquire Beal.

Here’s one important dynamic to keep in mind:

When a team acquires a player via sign-and-trade (as Miami would be doing in this four-star scenario if Antetokunmpo doesn’t sign a max extension in the next month), the team must operate under a hard cap for the remainder of the league year.

When a team becomes hard-capped, it cannot exceed the “tax apron” at any point during the rest of the league year. The tax apron is about $6 million above the luxury tax line; the apron was $138.9 million this past season and this upcoming season, with the cap at $109 million.

In the dream (but unlikely) scenario of Beal and Antetokounmpo, the 2021-22 max salaries of Beal ($34.5 million), Adebayo ($28.1 million cap hit if he isn’t named Defensive Player of Year, NBA MVP or to the All-NBA First Team), Butler ($36 million) and Antetokounmpo ($33.7 million) equal $132.3 million. That means the eight other roster spots must be filled by minimum salary players.

But that four-star scenario could not happen if Adebayo is named the league’s MVP this upcoming season because he would then be on a salary of $33.7 million in 2021-22. Adebayo’s 2021-22 salary also increases from $28.1 million to $32 million if he makes the All-NBA First Team and $30.9 million if he’s named the Defensive Player of the Year this season.

A quartet of Butler, Adebayo, Antetokounmpo and Oladipo — all with max contracts — also would require Miami filling out its roster with minimum salary players. That scenario under a hard cap wouldn’t be possible (with all players getting max money) if Adebayo is named MVP of the league, which raises his salary. But in all other circumstances, the Heat could afford those four and eight players on minimum deals and stay below the hard cap.

Holiday would have a first-year max of $40.5 million with a $115 million cap, making a Holiday/Butler/Adebayo/Giannis quartet impossible to accommodate unless Holiday took less than the max, which would certainly be possible.

And one final important point: Say Antetokounmpo signs the max extension with the Bucks but then demands a trade next offseason.

Miami — at that point — could offer Herro, Achiuwa, Robinson (in a sign-and-trade) and one or perhaps two future first-round picks – among other assets – but Milwaukee would be in a better position to demand more than that because he would be under contract to them for five years.

The Heat, filling out its roster on the eve of the start of practice, signed guard/forward Max Strus, who averaged 18.2 points, 5.9 rebounds, 3.2 assists and shot 41.5 percent from field in 13 games for the Bulls’ G-League team last year before season-ending injuries last December (a torn ACL and bone bruise to his left knee).

He appeared in two games with the Chicago Bulls last season; he had five points and one rebound in six minutes.

The 6-5 swingman went undrafted out of DePaul in 2019 and ranks among DePaul’s all time leaders in several categories, despite playing there only two seasons after transferring from Division 2 Lewis University. He averaged 20.1 points and shot 36.3 percent on threes as a senior and was second-team All Big East.

Strus will compete with guard Breein Tyree, forward Paul Eboua and perhaps one other player for the Heat’s second two-way contract (guard Gabe Vincent has one of the Heat’s two-way deals) or (possible, but less likely), a spot on the 15-man roster, which already has 15 guaranteed contracts.

Strus’ signing leaves the Heat with 19 players, one less than the maximum permitted for training camp. The Heat can begin individual workouts on Tuesday – with a few players working at one time in accordance with the NBA’s COVID restrictions – and then will begin full team training camp practices next weekend.