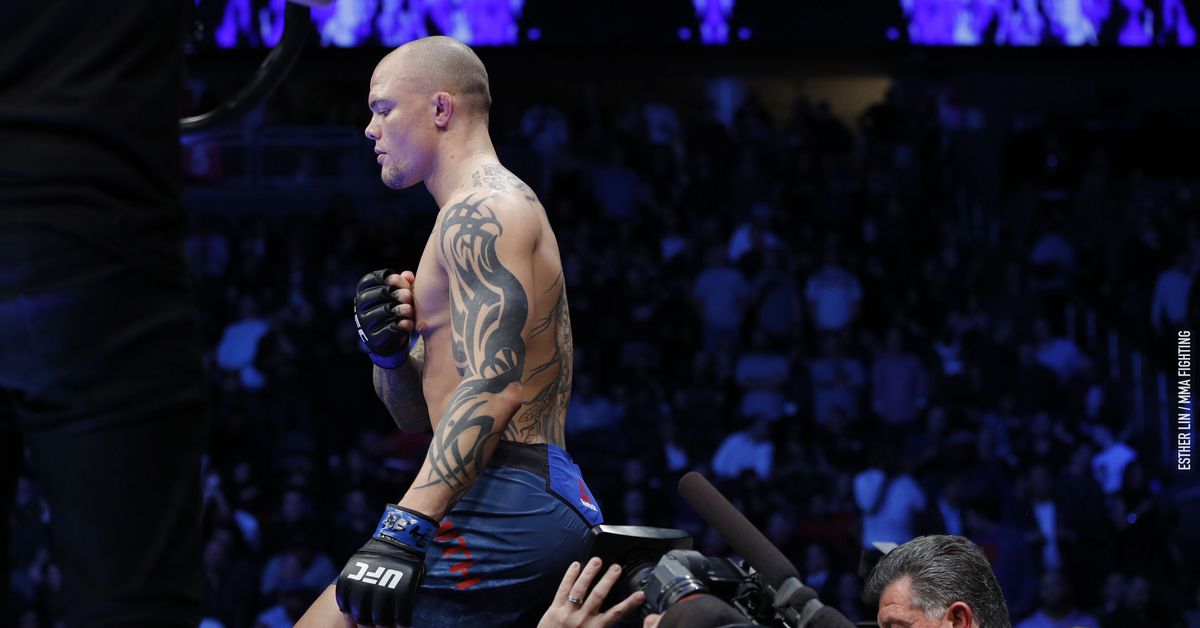 Will main event No. 7 prove to be good luck for Anthony Smith?

“Lionheart” and Devin Clark weren’t supposed to headline UFC Vegas 15, but after the originally scheduled main event of Curtis Blaydes vs. Derrick Lewis was canceled due to Blaydes testing positive for COVID-19, Smith finds himself in the show-closing spot for a seventh consecutive time.

Recent results have not gone well for Smith, a one-time light heavyweight title challenger who finds himself in a 1-3 slump with losses to top-10 contenders Jon Jones, Glover Teixeira, and Aleksandar Rakic. “Brown Bear” is a significant step down in competition from those names, but Clark has also won three of his last four and looks poised to use Smith’s name to announce himself as one to watch at 205 pounds.

Where: UFC APEX in Las Vegas

When: Saturday, Nov. 28. The four-fight preliminary card begins at 8 p.m. ET on ESPN+, with the six-fight main card starting at 10 p.m. also on ESPN+ and ESPN2.

Following a lopsided decision loss to Aleksandar Rakic, Anthony Smith has a lot of questions to answer about his wrestling defense. Getting taken down by Rakic is not something to be embarrassed about by any means, but it was the inability to adjustment that has led to concerns that Smith could be showing signs of a significant decline as he heads into his 50th pro bout.

He’ll get the chance to silence the doubters against Devin Clark, a confident wrestler who knows the smartest path to victory against Smith will be to get this fight to the ground. Clark has power on his feet, but he’s not as well-versed in the standup as Smith and every second that they’re up is a chance for Smith to catch Clark with a KO blow.

Another factor to consider is that this fight is now a five-rounder after being moved to the main event. Fighters always say they train to compete for 25 minutes anyway, but those two extra rounds have to matter when you haven’t specifically prepared for them. I’d expect the younger and less battle-worn Clark to be more inclined to go another 10 hard minutes than Smith. Look for Smith to try and end this one early and for Clark to pull away as the fight goes on.

I’ve written this before, I’m sure, but I hate picking fights like this.

You know there’s going to be at least one point in the bout where Miguel Baeza and Takashi Sato are just in the pocket throwing bombs, and all analysis and notes and preparation goes right out the window. As effective as they are at range, the temptation to hunt for a bonus will appeal to both fighters especially with that shiny co-main event title next to their names now.

For the most part though, Baeza and Sato will take their time sizing each other up with the knowledge that they both have the quick-strike ability to end this in a flash. I favor Baeza slightly as he has shown more variety in his striking and may even mix in some wrestling to throw Sato’s timing off. Still, it would be surprising to see this one go to a decision.

I don’t have any feel for this one at all, but I’ll say Baeza by second-round knockout.

It’s a mystery why Josh Parisian had to jump through so many hoops to finally get his shot inside the octagon. An Ultimate Fighter alum and a two-time Contender Series participant, Parisian brings a lively style to the heavyweight division and would be an instant crowd-pleaser if, you know, we had crowds.

Parker Porter, the owner of one of the thickest trunks in all of MMA, is a much more conventional heavyweight. He’s going to load up that right hand and walk Parisian down, absorbing some shots in the hopes of landing one big one to end the fight. It’s those lackluster defensive skills that have me thinking Parisian will pick Porter apart.

As long as Parisian can avoid the temptation to get too cute with his striking, he should find plenty of openings to bang those fists off of Porter’s head. Tough as Porter is, I don’t see him making it out of the first.

Bill Algeo has been fighting high-level competition for a while and even in defeat, his fights with Ricardo Lamas and Brendan Loughnane told us a lot about what kind of competitor he can be in the UFC’s featherweight division. On the other side, you have the much more unpredictable Spike Carlyle. “The Alpha Ginger” is emerging as a thrilling wild card, though it remains to be seen if he can put on a complete three-round performance.

That’s going to matter here as Algeo has seen enough of Carlyle to know that he’s going to be blitzed in the first five minutes. Carlyle will find a way to get Algeo down and Algeo will have to show that his ground defense is up to snuff. Like Billy Quarantillo before him, Algeo has the skills to survive. Then it’s a matter of outworking Carlyle on the feet and winning scrambles to secure a win. It won’t be easy, but Algeo should take this one.

A bad weight cut could be just the start of a rough weekend for Norma Dumont.

The good news for her is that she certainly won’t be undersized as she was when she fought Megan Anderson. However, dealing with the always scrappy Ashlee Evans-Smith is another dilemma entirely. If Dumont’s weight struggles have a deleterious effect on her performance (how could it not?) then this hill is going to be that much tougher to climb.

Evans-Smith is an improved striker and the threat of the takedown gives her an added edge. She’ll have to be wary of Dumont’s sneaky submission game, though she should be able to assert herself from top position without too much trouble if she can get there. I like Evans-Smith to win a comfortable decision here.

The length and boxing of Jonathan Pearce should be a solid challenge for Kai Kamaka III at this stage of his career. Pearce has a decent chin too, better than the one he showed in his UFC debut against a vastly more experienced Joe Lauzon.

I’m actually surprised Kamaka is sticking around at 145 pounds, though he has the musculature for it. He has speedy feet and hands, which will be key in a fight where he’s giving up five inches of height and a couple of inches in reach. If Pearce can keep Kamaka on the outside, then that changes the whole complexion of the fight.

Kamaka might be best served to focusing on countering, at least in the early going. He’ll have plenty of time to push the pace if it comes to it, but a patient approach could lead Pearce to step right into his range. Kamaka, 25, has already shown a lot of maturity for his age and that’s a huge asset in this matchup with the talented Pearce.

Pearce and Kamaka should get the main card started off on the right foot with a competitive fight, one that will end with Kamaka out-striking Pearce and winning a decision.