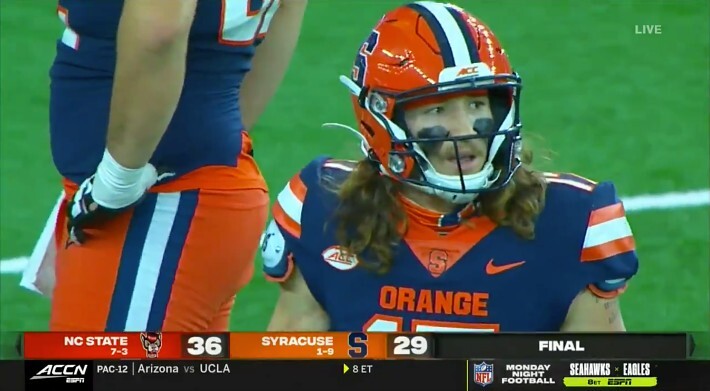 It’s been a tough year for Syracuse football. Dino Babers’ fifth season in The Salt City has seen one win, a bunch of losses, and a program that looks stuck in the mud after failing to build on a 10-win campaign in 2018. They did, however, have a chance to pick up another win on Saturday afternoon against a respectable NC State side.

With 5:20 left in the fourth quarter, the Orange got the ball on their 25 yard-line. Facing a 36-29 deficit, Syracuse marched down the field, converting a trio of third downs and one fourth down to get the ball to the Wolfpack nine with 52 seconds left.

First and second down were a pair of runs — one went for two yards, the other went for none. Syracuse lined back up for third down, and over the next 20 seconds or so of real time, calamity ensued.

For one, shout out to Orange signal caller Rex Culpepper for finding a way to keep the third down play alive, because this is a really sticky situation and he found a way to make something happen before NC State’s defense got home. After that, yikes. To give them the benefit of the doubt to an extent, the offense would have basically needed to get to the line of scrimmage and just run four verts, but there is a reason that someone (I assume on NC State) screamed “oh thank god,” and someone (team unclear) screamed “oh sh*t” once they realized what happened. Time and score are everything, folks.