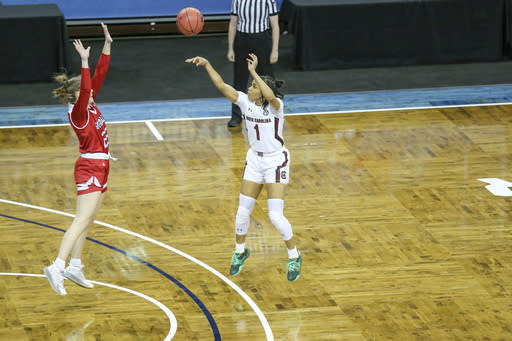 SIOUX FALLS, S.D. (AP) — Destanni Henderson and Zia Cooke each scored 19 points, and top-ranked South Carolina pulled away from South Dakota for an 81-71 win in the Bad Boy Mowers Crossover Classic on Saturday.

Henderson finished two points shy of a career high. She was 8 of 13 from the floor and also had nine rebounds.

South Carolina (2-0) trailed by five during the second quarter and the game was tied 37-37 at halftime before the Gamecocks pulled away. They outscored the Coyotes 31-11 in the third quarter, and Cooke’s basket with 19 seconds left gave the Gamecocks a 20-point lead entering the final frame.

They stretched the advantage to 21 in the fourth quarter before South Dakota cut it to seven with just under a minute to play.