Cuban-American actor Faizon Love has launched legal action against Hollywood studio Universal, saying he was cut out of the poster for the 2009 comedy Couples Retreat because he was black.

In a filing in a Los Angeles court reported by Deadline, Love said that he and his fellow actor Kali Hawk – the only principal black actors in the film – were removed from the international editions of the poster (ie, that used for promotion outside the US). Love said that while Universal had “no problem featuring Black actors” in the film, “when it came to publicizing the film to international audiences, Universal Studios chose to segregate the motion picture’s White and Black actors”. The filing also stated: “Mr Love and his Black costar, Kali Hawk, were expunged completely from the film’s principal international advertisement, while the other ‘couples’ basked in the publicity and acclaim of an international box office hit.” 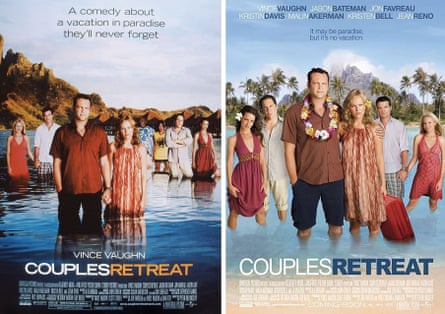 Couples Retreat: the US poster, left, with Faizon Love and Kalia Hawk, and the international version. Photograph: PR

Couples Retreat features four couples who visit a therapy centre, and also stars Vince Vaughn, Jason Bateman, Jon Favreau and Kristin Davis. Love and Hawk appear in the background of the promotional poster, but were removed from the poster used to promote the film in the UK.

Love says that after media reports of his and Hawks’ removal, he received an apology from then Universal chairman Adam Fogelson, as well as from Scott Stuber, one of the film’s producers, and that the poster would be destroyed. Love also said that Vaughn, the film’s lead actor, had also persuaded him not to make a fuss as it would not be “good for his career”. However, Love accuses Universal of “wilful discrimination” and “systematic bigotry”, and states that as of July 2020, he discovered that the poster had not been withdrawn.

Hollywood has regularly been dogged by accusations of discrimination in its production of posters and promotional materials, including complaints over international versions of posters for 12 Years a Slave, which prominently featured Brad Pitt and Michael Fassbender over the film’s lead Chiwetel Ejiofor, and a Chinese poster for Star Wars: The Force Awakens that minimised the role of star John Boyega.