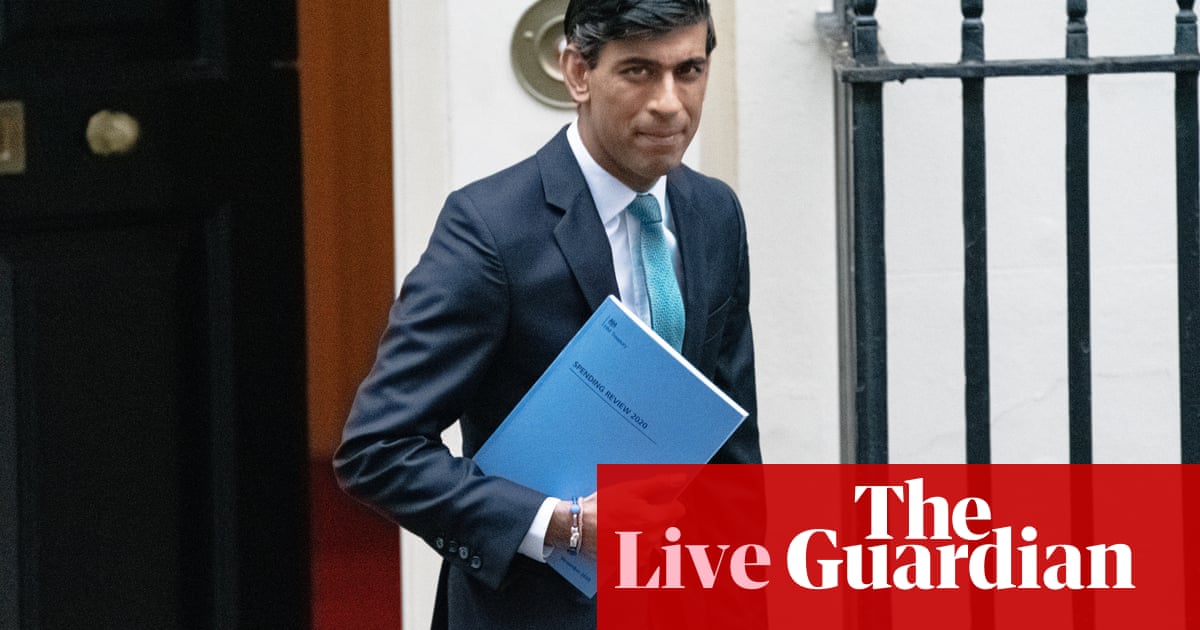 The Speaker ends by saying he is pleased the Commons has been able to provide equipment to No 10 to help the PM respond to questions remotely. But the Commons wants its kit back, he says.

Andrew Percy (Con) asks the PM to look again at tier 2 restrictions, and how they affect pubs that cannot offer substantial food.

Johnson says grants are available to help firms in hospitality and accommodation. He is keenly aware of how difficult it is for these pubs and hotels, he says. He says he will do his level best to support them.

He pays tribute to the people of Liverpool for supporting the mass testing pilot. That seems to have helped drive the virus down, he says. That offers a way forward.

Jon Trickett (Lab) says Rolls-Royce are about to offshore 350 jobs from the north of England. Does the PM agree those jobs should stay?

Tonia Antoniazzi (Lab) says the pay freeze will mean a cut to wages in real terms for public sector workers.

Rachael Maskell (Lab) asks if the government will invest in BioYorkshire.

Johnson says he hopes BioYorkshire will be among the beneficiaries of the government’s green investment programme.

Johnson says he does back these initiatives. Firms are getting tax breaks if they hire veterans.

Andrew Rosindell (Con) says, with London likely to enter tier 2 or tier 3 measures, does the PM agree there should be a full cost-benefit analysis first. He says new measures could be worse than the virus.

Johnson says Rosindell is right to highlight the damage lockdowns can do, but the government must consider the impact of the virus too.

He says the government will set out the health, economic and social impacts of its proposals, and the data supporting it, as it has done in the past.

It it not clear quite what Johnson is proposing, but this sounds like a potentially significant promise. Tory MPs in the Covid Recovery Group have been demanding a cost-benefit analysis as the price for their support in a vote on the new measures.

Johnson says he will look at this.

Stephen Farry(Alliance) asks for a grace period to allow time for the new post-Brexit arrangements to be introduced in Northern Ireland.

Johnson says there won’t be an extension, but the government is taking steps to ease the move to the new arrangements.

Dehenna Davison (Con) asks the PM if he agrees that now is not the time for MPs to have a pay rise.

Johnson says he does agree. He says ministerial salaries have already been frozen, as they have been since 2010.

Sir Ed Davey, the Lib Dem leader, says he asked the PM three weeks ago to raise the carers’ allowance by £20 a week. The government has not done that, but it has found millions for Tory donors, he says.

Johnson says he will look at this again.

Johnson says the UK will use its freedom after leaving the common agriculture policy to support farmers in protecting the environment.

Ian Blackford, the SNP leader at Westminster, says protecting foreign aid has long been an agreed position in the Commons. He quotes a minister defending the 0.7% aid target. Does the PM agree?

Johnson says it was the Conservative government that imposed the aid target. We are the second biggest donor in the G7, he says. He says that will continue. There has been a massive increase in aid spending. And it benefits Scotland, he says, because the civil servants from what was DfID work there.

Blackford says he was quoting Johnson’s own words to him. He says the pandemic will create extreme poverty around the world. The UK government cannot eradicate the threat from Covid if it is still spreading around the world. So does the PM agree it is worth spending money on protecting people?

Johnson says he does agree with that. He says the UK has already given more than almost any other country in the world to Covax, the international vaccination programme. The people of the UK should be very proud of what they’re doing, he says.

Johnson says schools have had extra this year. Kent is getting an extra £20m for schools, he says.