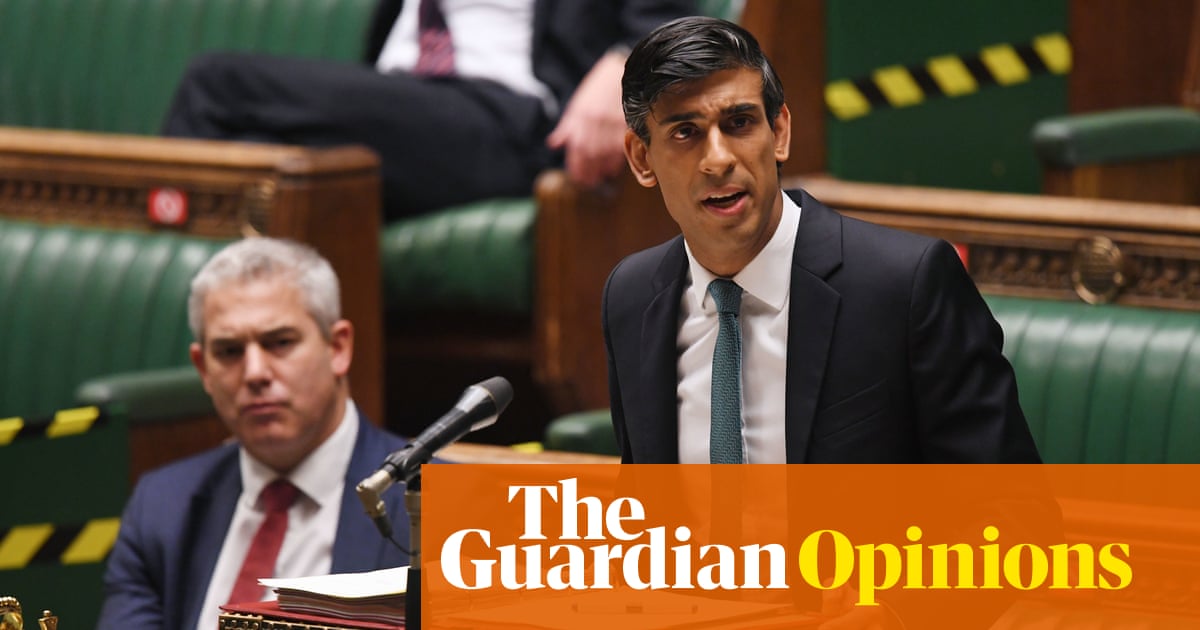 Playing the supporting act does not come naturally to Boris Johnson. But, on reflection, he might come to thank Rishi Sunak for taking centre stage with his spending review statement, as it allowed most people to overlook his third-rate performance at prime minister’s questions. Accusing Keir Starmer of focusing on trivia when asked about multiple breaches of the ministerial code will not go down as one of Johnson’s career highlights.

Not that the chancellor had an easy time of it either. Sunak tried to give his usual urbane, unflustered “don’t worry your pretty little heads, I’ve got everything under control” performance, but you could sense the tension in his voice. Then telling the country that it is basically economically screwed for the foreseeable future is not a job anyone would much relish. GDP had suffered its biggest fall in 300 years. The UK was committed to the highest level of borrowing during peacetime. Unemployment would rise to 2.6 million people. And even in five years’ time, the economy would be 5% smaller. The sums involved were eye-watering, the sort of numbers that no one could properly get their heads around.

There were mitigating circumstances, of course. No one had predicted the coronavirus pandemic, though Sunak was proud to say that the UK’s response had been worse than most. We had suffered the second largest – behind Spain – economic decline in Europe, but we had made up for that by leading the way in the number of people who had died. But what was clear was that though there were hopeful signs that the worst of the health emergency might be over next year if the vaccines came on stream, the economic emergency was only just beginning.

Sunak did his best to talk up his achievements and spending commitments, but it was hard to keep up the pretence when departmental budgets were being cut. Nor did a pay freeze for firefighters, teachers and other public sector employees quite square with the key worker promises from earlier in the year. Presumably we were supposed to have realised at the time that we were only clapping for some of our carers. There was talk of a “once in a generation” chance to build new homes but nobody was holding out much hope on that promise as “once in a generation” opportunities seem to come and go in weeks in Westminster these days.

Other moneys came and went at speed. There would be no continuation of the £20 uplift in universal credit and people with disabilities should rejoice in their 37p a week pay rise. And as from today the government’s manifesto promise to maintain overseas aid at 0.7% of gross national income was dead in the water. Those foreigners would have to start looking after themselves. We had done our bit by helping to develop a coronavirus vaccine that they might be able to use, so what more could anyone ask? But just to prove that the government didn’t break all its promises, Sunak concluded with a £4bn levelling-up fund for which MPs could bid. Provided those MPs held Tory red wall seats.

The statement lasted just under 25 minutes – there’s something to be said for keeping the bad news shortish and sweet, when some budget speeches can last the full hour – but was as remarkable for what it didn’t say as much as for what it did. There was no mention of the Brexit bonus which Boris had promised would come to our rescue in our hour of need. There again, now was not the time to mention a no-deal scenario that would knock a further 2% off GDP, or a third-rate deal that would achieve little better.

Nor did Sunak give any clue about how we were eventually going to pay for all the excess borrowing, but then he probably didn’t know. This was effectively the seventh or eighth budget he had given since March and the figures have got worse every time. So why make himself a hostage to fortune by mentioning tax rises when he still didn’t have a clue how much money he would eventually need? Rishi is the Monopoly chancellor who is writing cheques he has no idea if he will be able to cash.

Labour’s Anneliese Dodds, the shadow chancellor, was witheringly sceptical in her reply. While she didn’t underestimate the unprecedented nature of the pandemic, she did question many of the chancellor’s priorities in where to make cuts. Many inequalities would not just remain but be deepened. The chancellor may have called his rescue package one of the most generous on offer, but there were still gaping cracks through which many people would fall through at a time when Tory friends and donors were doing quite nicely out of the crisis. She was also the first to mention the B word. But even when reminded, Sunak was careful to forget to outline his Brexit calculations. There’s only so much bad news anyone can take at one time.

Nor was it just the opposition parties who were criticising the chancellor for his choice of priorities. Many Tories, including the normally mild-mannered, easy-going Peter Bottomley, Tobias Ellwood and Tom Tugendhat, were all highly critical of the decision to break the manifesto pledge and cut the aid budget. Andrew Mitchell suggested the cut would cost an extra 100,000 unnecessary deaths among some of the world’s poorest people.

Sunak merely shrugged it off. He could live with 100,000 deaths. Que sera, sera. By now his noted sang-froid was starting to wear off and his responses became less conciliatory. He is only used to being praised by his party for his generosity and foresight – even when many of his budgets have had to be revised in hindsight – being anointed as Boris’s natural successor. This is the first time his competence and judgment had come under scrutiny from his own side and he didn’t appear to much like it. Though he may have to get used to it.

• Join John Crace and Guardian columnist Marina Hyde as they look back at a political year like no other. Thursday 10 December, 7pm GMT, 8pm CET, 2pm EST Book tickets here