The people of Abergele are a hardy bunch. This autumn and winter they are enduring an invasion of celebrities and TV types, who have descended en masse to film a Celtic version of I’m a Celebrity … Get Me Out of Here! centred on their local castle. Not to mention journalists and diehard fans keen for a glimpse of hosts Ant and Dec.

So, compared with all that, the prospect of cockroaches, maggots, spiders and worms escaping from the grounds of Gwrych Castle into the countryside of north Wales – perhaps into the town itself – did not seem alarming to most.

Keith Rowlands, who owns the Aladin’s Cave junk shop, was deeply unimpressed. “I’ve got a 14ft royal python at home. And two Great Danes and 46 owls,” he said. “I’m not bothered by the idea of a few creepy-crawlies getting out.”

As the Guardian revealed on Tuesday, rural crime officers from north Wales police are looking into complaints that non-native species could be on the loose.

The authorities are investigating ITV after complaints by the television presenter and naturalist Iolo Williams, who was appalled after watching the show and seeing thousands of cockroaches being poured over contestants. He described it as “madness” to use non-native species for entertainment.

On Wednesday, the Welsh first minister, Mark Drakeford, expressed concern. “We worked carefully with the production company to make sure that all the rules are being observed,” he said during an appearance on BBC Breakfast. “If there have been some infringements then it’s right that they are investigated. We would be concerned about non-native species being released.”

Husband and wife Hugh and Pat Owen, 74 and 79, were to be found strolling around the walls of Gwrych Castle on Wednesday. Pat Owen, a retired care home cook, wrinkled her nose when asked if she had any concerns. “I just hope they don’t get anywhere near my house,” she said. “I’ll stamp on them if they do.”

ITV insisted all the insects used on I’m A Celebrity were non-invasive species, but declined to comment on which species were used. A spokesperson said: “They are only ever released in a contained area and collected immediately after filming. They are all purchased commercially within the UK and are normally bred as animal food.” 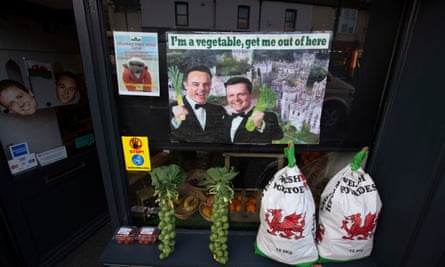 Tracey Brennan, who owns a vegetable shop and gift store in the town and is the chair of Abergele Association of Traders, said she believed the show’s makers were doing all they could. “I’ve been up there delivering,” she said. “I’m spider-phobic but I’m not worried.”

Brennan reckoned the only insects and arachnids that would be spotted in the town were the giant models that cling to the walls of some of the buildings as part of an arts project – and a knitted cover on a postbox near the castle featuring a woollen spider.

“If anything edible does escape, I’m sure our native Welsh wildlife would sort them out,” she said.

The Beulah brass band was rehearsing outside a Methodist church before a tour of the town to cheer people up this festive period. The chairman, David Woodward, said his approach to a fugitive would be as brutal as Pat Owen’s. “If I see a cockroach I’ll stamp on it,” he said.

Kirsty Roberts, a huge I’m a Celebrity fan and the owner of Raymond’s Cafe, shuddered at the idea of cockroaches. “Oh God, that’s all I need in the cafe. But I’m sure it will be all under control.”

She is a member of an Abergele Facebook group devoted to the show, of which she said: “We think it has been brilliant for the town. It has put us on the map.” 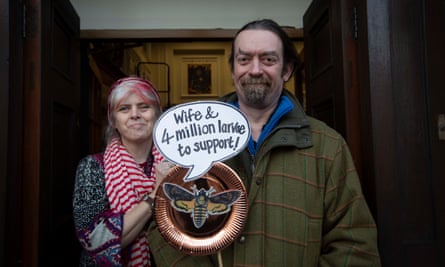 There has been talk that cockroaches have managed to escape the castle in skips used to cart away detritus from the show. Workers at one local skip yard confirmed that they did take bits of old set away – but insisted they had not accidentally been saddled with pests.

At the Peculiar Gallery in Abergele, which boasts an eclectic collection of art and curiosities, Pea Restall and her husband, Dave McQuillan, took the side of the insects over the celebrities. “I’m a vegetarian,” said Restall. “I can’t bear the idea of any creatures being hurt. But I haven’t been up there liberating them. Honestly – it wasn’t us.”