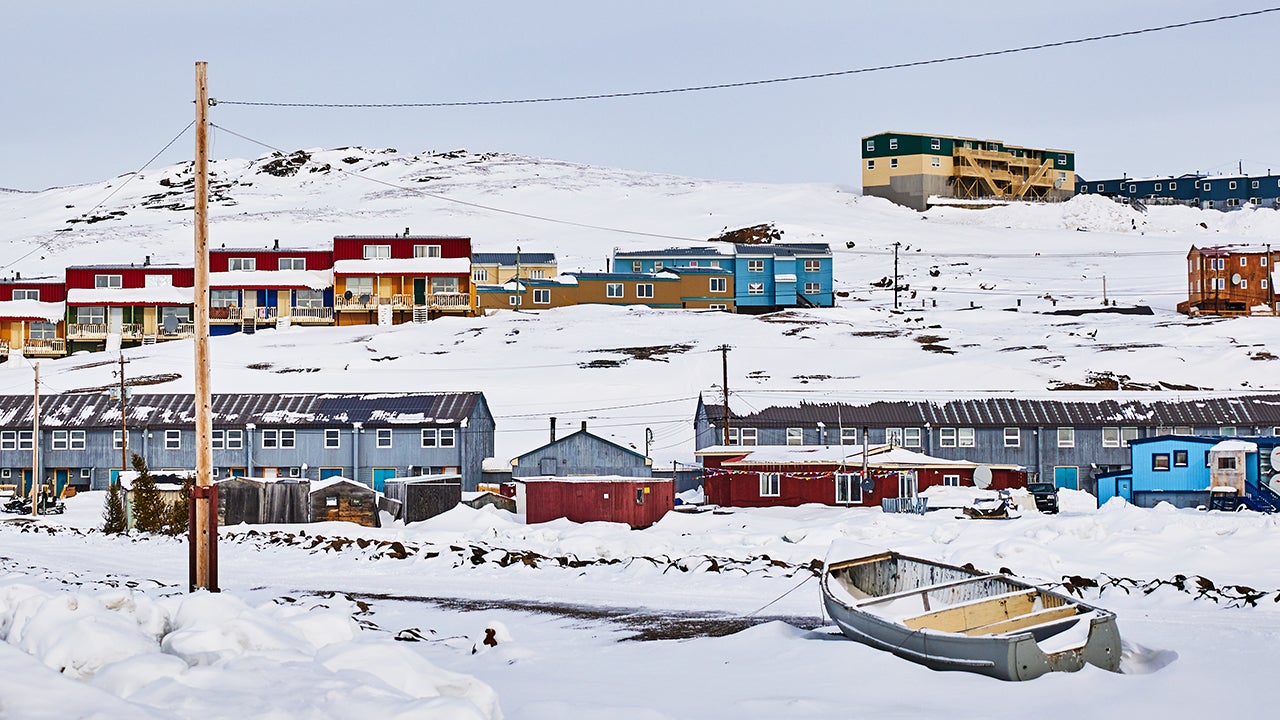 Nunavut, a Canadian territory consisting mostly of land north of the Arctic Circle, seemed to be the last place the coronavirus pandemic reached, staying clear of any COVID-19 patients in the 10 months the virus has spread across the country. Now, cases are skyrocketing.

The frozen Far North, where some communities continue to live off the land in a traditional way of life, confirmed its first coronavirus case on Nov. 6. Since then, numbers have climbed at a rapid pace, leaving experts concerned with how the region will handle the response and if the unique circumstances facing Nunavut will lead to a devastating impact.

As of Tuesday, 19 days after the first confirmed positive case in Sanikiluaq, there are 142 active cases and counting. All those with confirmed cases have only seen mild or moderate symptoms and have been ordered to isolate, according to the Government of Nunavut. Officials are continuing to conduct mass testing in the communities impacted.

The hardest hit community there is Arviat, a remote, fly-in hamlet of about 3,000 people located on the western shore of the Hudson Bay. So far, there has been 107 confirmed positive cases. Most people living there are native Inuit.

“It’s kind of stressful to see the numbers go up,” said former Arviat resident Jordan Kunek, who has since resettled in Nunavut’s capital, Iqaluit. “We’re all nervous, but there’s a lot of positive attitude as well. Inuit always like to think of themselves as positive people, even during these hard times.”

Konek is Inuit and works as the executive director of the Inuit Broadcasting Corporation, advocating for issues affecting life in the Far North and the Inuit communities there. And no issue is more dire than that of the myriad ways life in Nunavut has been impacted— and threatened— by the coronavirus pandemic.

Why COVID-19 Is Especially Dangerous for the People of Nunavut

Travel has been severely restricted in Nunavut for months. As the Federal Government of Canada and other provinces began imposing travel bans and mandatory quarantine measures in March, so did the Territorial Government of Nunavut, which banned most outsiders, including other Canadians.

Anyone who does enter the territory, including essential workers and returning residents, must undergo a 14-day quarantine at a government-mandated hotel in Ottawa, Winnipeg, Edmonton or Yellowknife. Only people showing no symptoms of COVID-19 and armed with a signed letter from Nunavut’s Chief Medical Officer of Health Michael Patterson may enter on certain, approved travel days.

Nunavut is unique in that it is the only region not connected to the rest of Canada by highway. Instead, traveling the region’s 25 hamlets and capital of Iqaluit is only possible by air, which may have been what kept the coronavirus at bay for nearly an entire year.

But Nunavut also faces certain challenges that makes this outbreak all the more concerning.

Nunavut only has one hospital, the Qikiqtani General Hospital located in the capital of Iqaluit. The hospital only has 35 beds, a dozen ventilators and no intensive care beds, the Washington Post reported in June. Many locals leave the territory to seek any medical treatment, including childbirth, diagnostic testing or chemotherapy.

Iqaluit and its hospital is also located more than 800 miles from Arviat and 600 miles from the other hotspot of Sanikiluaq. Because of how remote the communities are, both commutes would require pricey air travel and layovers.

Like many indigenous groups, the Inuit in Nunavut also have a history of having battled extensive disease in the face of European colonization, including Measles, influenza and tuberculosis, which continues to devastate the population. In the 1950s, when the Canadian Government embarked in their expansion into the Far North, at least one out of three Inuit was infected with tuberculosis, and today, Inuit are 38 times more likely to contract tuberculosis than the average, non-indigenous Canadian, according to the Canadian Public Health association. In comparison, the tuberculosis rate among other Aboriginal populations in Canada are six times more than the average, non-indigenous Canadian.

Additionally, 63% of Inuit adults living in the Far North are daily smokers, in contrast with 16% of all adults in Canada, according to the National Representational Organization for Inuit in Canada, also known as the Inuit Tapiriit Kanatami (ITK). Nunavut also has a high rate of diabetes and obesity, a consequence of exorbitant food costs, according to the Canadian Encyclopedia – all of which increases the community’s risk should an individual contract COVID-19.

Nunavut’s History Coupled With Its Housing Crisis: a Perfect Storm for the Spread of COVID-19

Konek explained that the wait lists for adequate housing in Nunavut are extremely long, forcing many to live with family members or friends, thus leading to overcrowded housing. All of that makes social distancing and proper ventilation, which is proven to minimize spread, according to the CDC, impossible if someone in the household gets sick.

“That’s the issue we knew that would be the major cause of spreading,” he said.

Despite Inuit making up 50% of the government of Nunavut, which officials hope will increase to 58% by 2023, Konek said it is now up to the federal government to do something about their circumstance.

“My grandpa used to tell me this story where he and his family used to live out on the land and they were okay. So many times, [the federal government] tried to move them back into the community, saying they’ll live a better life. ‘Don’t worry about your house and don’t worry about your lifestyle,’” he recalled. “Since then, there has been a bit more trust in the government, I guess, depending on where you are and what you have. But there’s definitely a lot more that the government can do to support the communities because we all know the issues that are faced here.”

As They Have for Millennia, the People of Nunavut Know They Will Survive

Ultimately, Nunavut did not anticipate being hit by the coronavirus. In addition to travel restrictions, the territory and its population has done well to ensure masks are worn and social distancing rules are obeyed since the recommendations were put in place early on in the pandemic.

“In March, when it just started coming into Canada, we took it seriously at the time. We were practicing social distancing. We were all washing our hands,” Konek said. Despite no confirmed cases in Iqaluit, where Konek lives, nor any mandatory mask policies, “these past two weeks was just everybody wearing a mask in the store and everywhere you see people walking wearing a mask and we’re all taking it seriously.”

He believed someone in the Arviat community had travelled to another province for healthcare, and despite having completed a strict 14-day quarantine before returning and having followed all the guidelines as required by the Government of Nunavut, the person inadvertently brought it back to the hamlet.

Despite cases being limited to certain communities, the entire territory went into lockdown on Wednesday, Nov. 18. All non-essential services were required to close, including schools, hair salons and bars. Restaurants are now take-out only, and even government staff will transition to a work-from-home model. Masks are mandatory in two regions, and are strongly recommended territory-wide.

“Nobody is above the rules here,” Nunavut’s Premier Joe Savikataaq said at the announcement. “Do not visit. Do not socialize outside your household.”

“We knew it was coming,” Konek explained. “We’re staying home and following all the guidelines from the health department and doing it together.”

But Konek has no doubt that the Nunavummiut, a term that refers to the people of Nunavut, will overcome the challenge.

“Inuit always like to think of themselves as positive people, even during these hard times,” he said. “The stores are coming together … the local radio held a contest where [listeners call-in and shared] funny stories that happened to them, or held a contest like ‘What is the capital city of British Columbia?’ Fun things that are getting people to interact with each other.”

The Arivat community has also banded together to build a GoFundMe page, to help each other with money to buy groceries, pay bills or pick up puzzles and coloring books for their kids during this period of lockdown.

“People are scared, but they’re also doing this together and know that as a group, they can get it done,” Konek said.

1,200 Colorado Inmates Were Rarely Given Masks— And Then Most of Them Tested Positive for Coronavirus