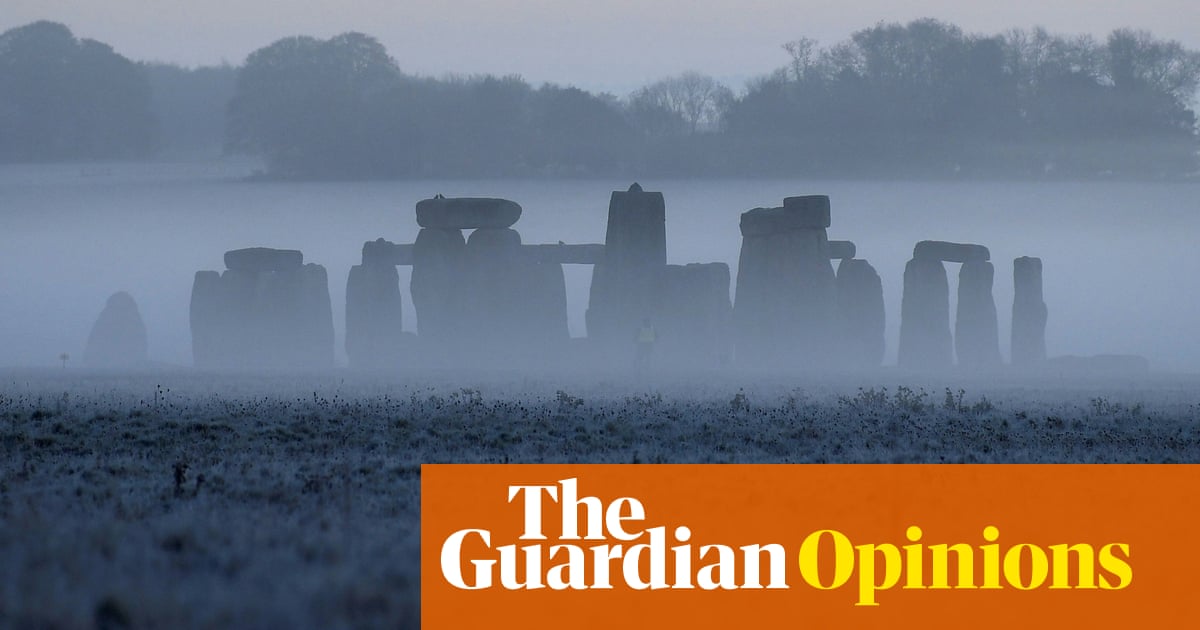 Stonehenge is, with the sole exception of Big Ben, the most famous monument in the British Isles. Until the Covid-19 pandemic effectively stopped tourism, it was visited by 1.5 million people a year; from this single site, English Heritage would normally make about a fifth of its income. It is neither the largest nor the oldest of Britain’s 1,300 stone circles, but it is by far its most culturally generative, inspiring figures from Thomas Hardy to William Blake and, latterly, Jeremy Deller, who made a cheeky bouncy castle version, titled Sacrilege, that toured the UK in 2012. Who could forget, too, the comically tiny replica of Stonehenge that appears as a stage backdrop in the 1984 rock mockumentary This Is Spinal Tap? Stonehenge is surely unique among British monuments in having sparked a modern religion, druidism. It is even, argues historian Rosemary Hill, the distant ancestor of that great feature of the British roadscape, the roundabout.

Until relatively recently, little was understood about the monument’s history and purpose, and even its precise age was unclear until the 1990s, when radiocarbon dating provided firm evidence that it was about 5,000 years old. Into this void flooded every kind of theory: that it was deposited there by aliens, that it was built by Romans, druids, Vikings, or the magician Merlin; that it depicts a map of the stars, that it had healing or acoustic properties; that it is a fertility symbol representing a vast vulva. The most influential current theory is that of Prof Mike Parker Pearson, who argues that Stonehenge was built as a monument to the dead.

“Every age,” wrote archaeologist Jacquetta Hawkes, “has the Stonehenge it deserves.” It turns out that our age’s Stonehenge is one at the centre of a decades-long, expensive, bad-tempered planning dispute. Since as far back as the early 1990s, there have been debates over whether and how to widen the over-congested adjacent highway, the A303, and sink it into a tunnel. Now the transport secretary, Grant Shapps, has given consent for a £1.7bn scheme to build a 3.2km tunnel.

But that hardly settles the debate. English Heritage and some archaeologists have welcomed the plans, pointing to an improved experience for visitors, who will be able to access the environs of the stones without their being bifurcated by a noisy highway. But, since the dual-carriageway tunnel portals will have to be bored into land that lies firmly within the Unesco world heritage site – a unique territory rich with neolithic and bronze-age remains – plenty of others, including figures like Prof Parker Pearson, protest that irreparable damage will be caused. Many mourn too that the view of Stonehenge from the road will be lost – a sight that has added a touch of magic to millions of journeys.

The truth is that Stonehenge is the victim of a typically unsatisfactory British fudge. Even the tunnel’s proponents struggle to argue that this is the perfect scheme. If there must be a tunnel, it ought to be one whose creation does not deface the incalculably precious landscape that surrounds it. Simply put, it should be longer.