Furloughed from her hospitality job during the first lockdown, Hannah Russo was trying to sell her child’s baby clothes when she found many other mothers trying to do the same. From there has come Babybundle, a website where parents can buy and sell bundles of often unused clothes to each other.

“Many mums are gifted baby clothes, or have seen how quickly their babies outgrow clothes, with some not even worn due to size and seasonality. The mums share the interest to pass on these clothes. Secondhand is no longer second best – it comes with many benefits: economically, sustainability, and also mums supporting one another,” she says.

Russo has tapped into a growing appetite for the “circular economy” – the idea that products such as clothes and furniture, or materials such as paper and plastic, are constantly reused and regenerated to reduce pollution. It’s a concept that has gathered momentum during lockdown. Earlier this month the government announced an investment of £22.5m in five research centres to reduce waste and boost recycling.

The trend is extending to everyday brands. Next year, Ikea is expected to launch a “buy-back” initiative in UK and Ireland stores, where it will buy unwanted furniture from customers to resell as secondhand. Customers will get vouchers to spend in store, the value dependent on the condition of the items they return. Clothes retailer Cos recently launched its resell scheme, while in the US, jeans brand Levi’s has a secondhand service under which used pairs can be sold back.

The idea of the “circular economy” has been developing for years but has accelerated recently with the increased focus on sustainability.

The pandemic has focused minds on what is, and is not, important, says Samantha Valentine, co-founder of online secondhand children’s clothes site dotte, which went live last week. It is a marketplace for buyers and sellers with 15% commission per transaction.

“The pandemic has forced people to take a look at their day-to-day: what’s important, what isn’t, what’s just fluff. A lot of people are gaining a greater perspective into what it is that brings them joy,” she adds. “They have been forced to slow down, to sit in a room with themselves, and look at how they live their lives. With this natural reflection has come a shift in importance for how they are behaving and the impact that is having on the planet.”

Joe Metcalfe, founder of online charity retailer Thrift+, says people are making a “moral decision” to shop for “less new” clothes. His site takes clothes donations from the public and sells them online, with part of the profits going to charities. Burberry jeans for £45 are listed alongside Diane von Furstenberg dresses for £35. “More and more people … are loud and proud about trying to shop exclusively secondhand,” he says. “Previously, the reason would have been primarily price – secondhand clothes are typically 75% less than RRP.” 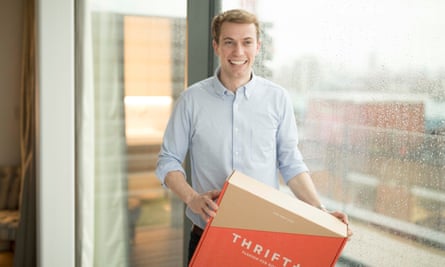 Loopster sends “clear-out” bags to parents for good-quality branded clothes which are then checked and put on the site. Founder Jane Fellner, who set it up to try to extend the life of clothes, says the “Attenborough effect” means that more people are now interested in sustainability.

“They are increasingly examining their own consumption and what changes they can make to become sustainable. Secondhand has become more socially acceptable and, for some, cool. Thrifting is now massive on TikTok,” she says.

Big brands jump on board

Ikea’s scheme will mean that sideboards, bookcases, shelving, small tables, dining tables and other pieces of furniture can be taken back after customers register a request online. A well-used piece with several scratches can expect to get 30% of value back, while nearly “as new” may get 50% on a refund card. What won’t be accepted will be sofas, armchairs, kitchens and mattresses, among others.

With Cos’s reselling initiative, prices of products currently on sale range from £5 for a T-shirt to £125 for a down jacket.

All this means that the products are now available to more people, says Joe Murphy from the Ellen MacArthur Foundation, which works to promote the ideas behind a “circular economy”. Companies are being led by what consumers increasingly want, to tackle problems around consumption and sustainability.

Analyst Jonathan De Mello from CWM Retail Consulting believes that the success – or not – of brands such as Cos and Ikea will dictate whether other companies follow. “For Cos and Levi’s specifically, their motivation is likely to be to tap into the increasingly environmentally-conscious consumer. Millennials are willing to pay more for sustainable products, and for retailers this opens up an interesting and potentially very profitable revenue stream – while boosting their sustainability credentials,” he says.

Consumers buying used or secondhand goods through retailers have the same rights under the Consumer Rights Act, says Martyn James of complaints site Resolver. “Wear and tear is to be expected … but you still have rights, and the rule of thumb is the goods must be of ‘satisfactory’ quality’, so as advertised, even if previously owned or used,” he explains.

For those selling on goods that they bought, the situation is different, he explains. “Circular sales is a new and interesting development for consumer rights. So new, there aren’t existing laws that definitively cover it, so we have to apply existing rules and regulations. Circular sales can involve ‘trading in’, most commonly seen with old phones, or the new form of ‘selling back’ goods to suppliers. This is different to the secondhand market, which is now most commonly experienced through online marketplaces like eBay.