A number of theatre workers who lost their jobs when the coronavirus crisis forced live venues to close are retraining to insulate and upgrade homes as part of the fight against climate breakdown.

Stage hands, technicians and joiners from theatres and live venues across Manchester and the north-west are using their skills to retrofit homes in the region, installing insulation, fitting windows and upgrading heating systems.

The scheme was set up by Andrew Glassford, 29, who had worked as a sound engineer before the pandemic hit. He said: “I am really proud and pleased with what we have achieved, just for the fact that I have been able to get my friends work that is meaningful, that helps them but also helps tackle the climate crisis.”

Glassford set up the Retrofit Get In initiative in September when he joined forces with Red Co-op – a cooperative that specialises in retrofitting buildings. So far about a dozen former theatre workers have been employed but he hopes to expand the programme and establish a formal training scheme for unemployed theatre staff.

“We have had people insulating the loft, removing a floor, insulating walls, putting in a bay window,” he said. “They have done all sorts of things they would not necessarily have thought they have the skills to do with a little bit of guidance and help.”

Alan Tierney, 34, who worked backstage at the Lowry theatre in Manchester for 16 years is one of those involved. “What we have done so far I would never imagined – fitting windows, insulating walls and the loft, putting in floors … it is really interesting and rewarding work.”

The fledgling scheme has no government or council backing, although Glassford hopes that once politicians realise its multiple benefits – from helping people back into work to reduced emissions – they will support it.

This year the government introduced a £3bn green homes grant to kickstart retrofitting in the UK, but the scheme has run into trouble as builders and installers have so far failed to sign up. 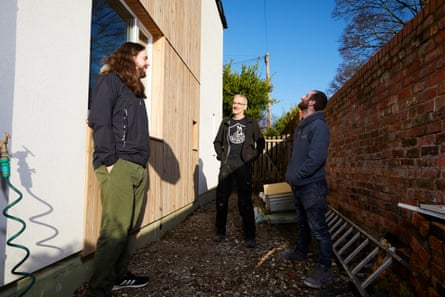 Charlie Baker, who runs Red Co-op and has been designing and constructing sustainable buildings for more than 30 years, said it was crucial retrofitting was properly supported for the long term by government and local authorities, with funding, certified training and regulation.

“We can get our homes to zero carbon but we have to build consumer trust, a much more adept supply chain together with the patient finance, rather than boom and bust funding that doesn’t got far enough,” he said.

Baker said a recent report submitted by Red Co-op to the West Yorkshire combined authority showed how the region’s housing stock could be taken to zero carbon with no cost to the public purse other than helping train the workforce.

“If we do this right it is dignified, long-term employment that improves people’s homes and living conditions and addresses the climate crisis – it hits all the buttons, it just needs to be properly organised, thought through and committed to.”

Retrofitting is recognised as a key plank in the fight to reduce emissions and avoid some of the worst impacts of the climate emergency. Experts say it has the potential not only to make homes more liveable and sustainable but also create hundreds of thousands of jobs.

One study this week found that retrofitting homes across the north of England would create 77,000 jobs and boost the local economy by almost £4bn a year.