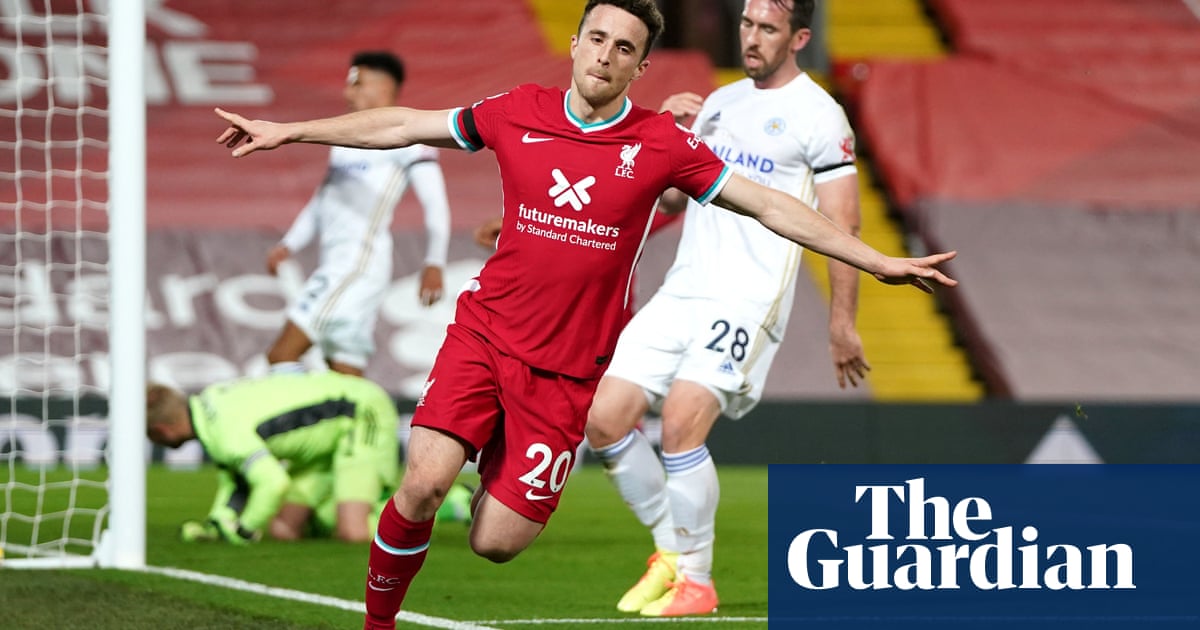 Liverpool made history while sending a warning shot. Leicester had arrived at Anfield with designs on a return to the Premier League summit but were swatted aside by a Liverpool team missing three-quarters of their first-choice backline, captain Jordan Henderson and leading goalscorer Mohamed Salah. Rivals must fear a champion when it is diminished in numbers but not quality.

Jürgen Klopp’s side extended their unbeaten home league run to 64 matches – eclipsing the club record set between 1978 and 1981 – courtesy of a comical own goal from Jonny Evans, another predatory finish from Diogo Jota and a late header from Roberto Firmino. Jota’s goal, Firmino’s return to form and the continued development of Curtis Jones were among the highlights of a dominant team display that made this a chastening return for Brendan Rodgers. His Leicester team, usually so effective on the counterattack away from home, were nullified, harried and outclassed.

In keeping with the story of the season, Liverpool’s injury problems increased with Naby Keïta pulling up in the second half. Klopp will bemoan the misfortune while savouring how it galvanises the players left standing.

A commanding night commenced with a tribute to Ray Clemence, in many eyes the finest goalkeeper to play for Liverpool, who died last Sunday aged 72. The goalkeeping team laid a wreath behind the Kop goal while Alisson warmed up in a replica of Clemence’s jersey from the 1981 European Cup final. The shirt will be signed by the Liverpool team and auctioned to raise funds for prostate cancer research.

Not for the first time this season, the defence in front of Alisson was disrupted by injury, with Trent Alexander-Arnold and Joe Gomez joining Virgil van Dijk on the sidelines. And, once again, any weaknesses that lurked in a much-changed rearguard were covered by the sheer quality the champions possess elsewhere. Not that Klopp’s backline was too shabby with Fabinho returning to partner Joël Matip in central defence and James Milner deputising for Alexander-Arnold at right-back. Liverpool’s productivity in that department did not cease in the absence of the England international. Milner corners created the first and third goals.

Where Leicester were passive, Liverpool were sharp, aggressive and assertive. Sadio Mané headed into the side-netting from a Milner corner after two minutes. Jones drew the first save of the evening from Kasper Schmeichel when, collecting Keïta’s fine pass, his angled drive was blocked by the keeper. Jones produced another fine display on the right of Liverpool’s midfield three, demonstrating on his second Premier League start of the season that he is in on merit and not out of necessity. His movement, accuracy in possession and sense of responsibility belied his teenage years. Leicester were rarely able to release Jamie Vardy and their formation resembled more an overly cautious 5-4-1 as they were pressed into submission.

That said, the visitors presented Liverpool with the lead when Evans unwittingly back-headed Milner’s corner past his own goalkeeper. The Northern Ireland international was more preoccupied with Mané than the flight of the ball as he grappled with the striker in the six-yard area. By the time Evans sensed the danger it was too late. Schmeichel was already beaten by his thumping header.

Leicester struggled with Liverpool’s set pieces throughout, but were also prised apart in open play for the second. “Be aggressive, be aggressive,” yelled Schmeichel as Marc Albrighton attempted to close down Andy Robertson when the left-back collected a crossfield pass from Jones. The goalkeeper’s warning went unheeded. Robertson ghosted past his marker and whipped a delightful cross into the area where Jota, stealing in ahead of Christian Fuchs, beat Schmeichel with a perfectly placed glancing header. In the process, the Portugal international became the first Liverpool player to score in his first four home games in the top flight.

Leicester threatened little but should have levelled two minutes after Evans’ own goal when Harvey Barnes sent Vardy scurrying clear down the left. The striker’s pull-back returned invitingly for Barnes only for the midfielder to sidefoot wastefully wide.

Schmeichel then saved superbly from Mané, and Fuchs prevented Jota converting the rebound by heading off the line. The keeper also denied Jota twice, and Evans almost scored another own goal when he headed against a post.

The woodwork came to Schmeichel’s rescue when Firmino spun away from Wesley Fofana only to strike the inside of the far post. The rebound hit the Brazilian and was headed for goal until Albrighton cleared on the line, although only as far as Mané, whose scuffed shot also hit the post via the goalkeeper before dropping into Schmeichel’s arms.

But Firmino and Liverpool could not be denied. With four minutes remaining, from another Milner corner, the striker soared above the substitute Cengiz Ünder to head into Schmeichel’s bottom right corner.