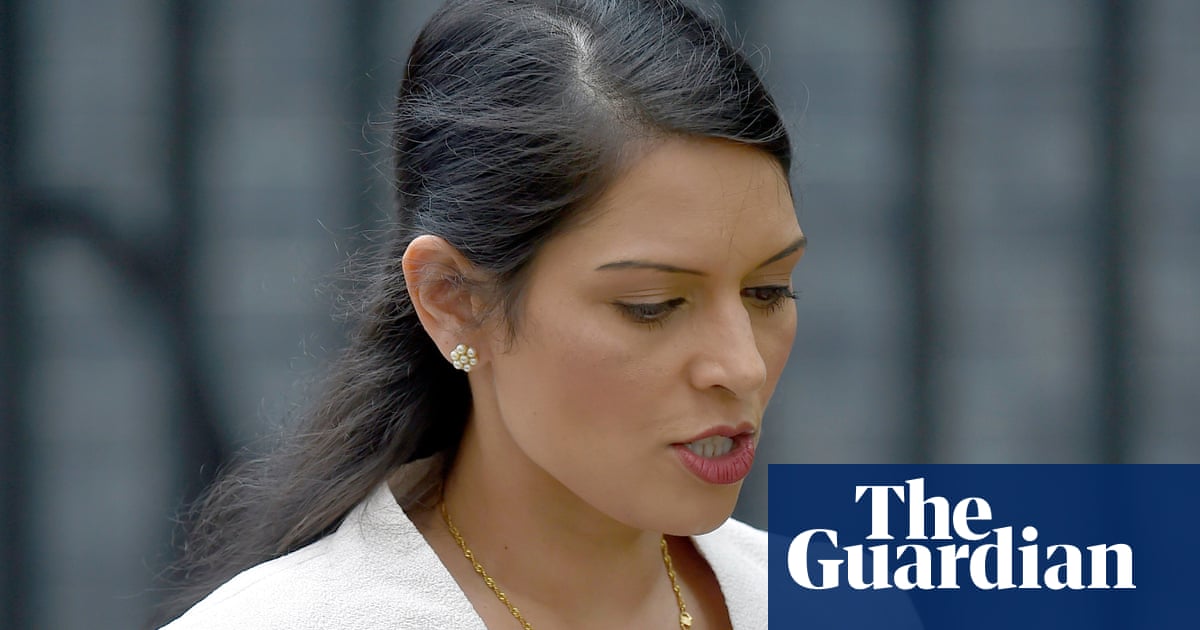 Segueing from ruling the waves (The politics sketch, 19 November) to waiving the rules (Boris Johnson adviser quits after being overruled on Priti Patel bullying report, 20 November), our prime minister repeats the original Boris Johnson doctrine as farce. The latter-day Johnson intervenes not to overthrow governments, but to attempt to overturn the findings of an independent report and, having failed to do so, extends the doctrine to deny reality.

It now appears that if the ministerial code is breached unintentionally (presumably deliberate breaches are rare), it can be deemed not to have been breached at all. By this standard, the government’s handling of Covid-19 has not been inept and gridlock after Brexit, instead of the promised frictionless trade, will be illusory. Somehow, I don’t feel reassured.
Dr Anthony Isaacs
London

• In response to Priti Patel’s claim that she has made an unreserved apology, it should be pointed out that she has done nothing of the sort. What she has proffered is a mealy-mouthed “politician’s apology”, which can be abridged to “I did something you didn’t like, and I’m sorry you didn’t like it”. This is in complete contrast to a true apology, which is along the lines of “I did something I shouldn’t have done and I am sorry I did it”. The second is an admission of guilt and an indication of remorse, the former is little more than a transfer of responsibility for her actions on to her victims, who would presumably have appreciated her actions, if only they weren’t such sensitive souls.

Patel is not, of course, the first person to use the politician’s apology as a means to provide an expression of regret without actually doing so. This is, however, perhaps the most flagrant use of the technique I have witnessed.
Steve Colbey
Portsmouth, Hampshire

• So Priti Patel gets frustrated occasionally? Thousands of asylum seekers get frustrated every day waiting for the Home Office she runs to reply to their inquiries. Huge numbers of Windrush claimants are frustrated too, waiting for news of their claims. Yet the Home Office has arranged for more Jamaicans to be deported away from their families in the coming weeks. And all the decent people in the country who care about this sort of thing are pretty frustrated too. We are not shouting, but we are very angry.
Wendy Bond
Greenhead, Northumberland

• In light of the inquiry into whether Priti Patel was guilty of bullying, I thought I would check out what the ministerial code consists of. I haven’t got further than the foreword to it written by the prime minister. He writes: “There must be no bullying and no harassment; no leaking; no breach of collective responsibility. No misuse of taxpayer money and no actual or perceived conflicts of interest.” It couldn’t be expressed more clearly. But, rather like a game of ministerial Pokémon, Boris Johnson and his cabinet seem to be checking off every deviant behaviour on his list.
Catherine Dornan
Llandrindod Wells, Powys

• If a teacher were to shout and swear at students in frustration at their behaviour and claim, in defence, mitigating circumstances, it is unlikely that such a defence would be accepted, nor would a headteacher be likely to express full confidence in the teacher. Disciplinary action would invariably follow.
Alan James
London

• Priti Patel says she never intentionally set out to upset anyone, as though that gets her off the hook. It doesn’t. There are many character flaws that result in bad behaviour that are not as such intentional. Examples are egotism, lack of consideration for others, insensitivity and thoughtlessness.
Paul Brownsey
Honorary research fellow in philosophy, University of Glasgow