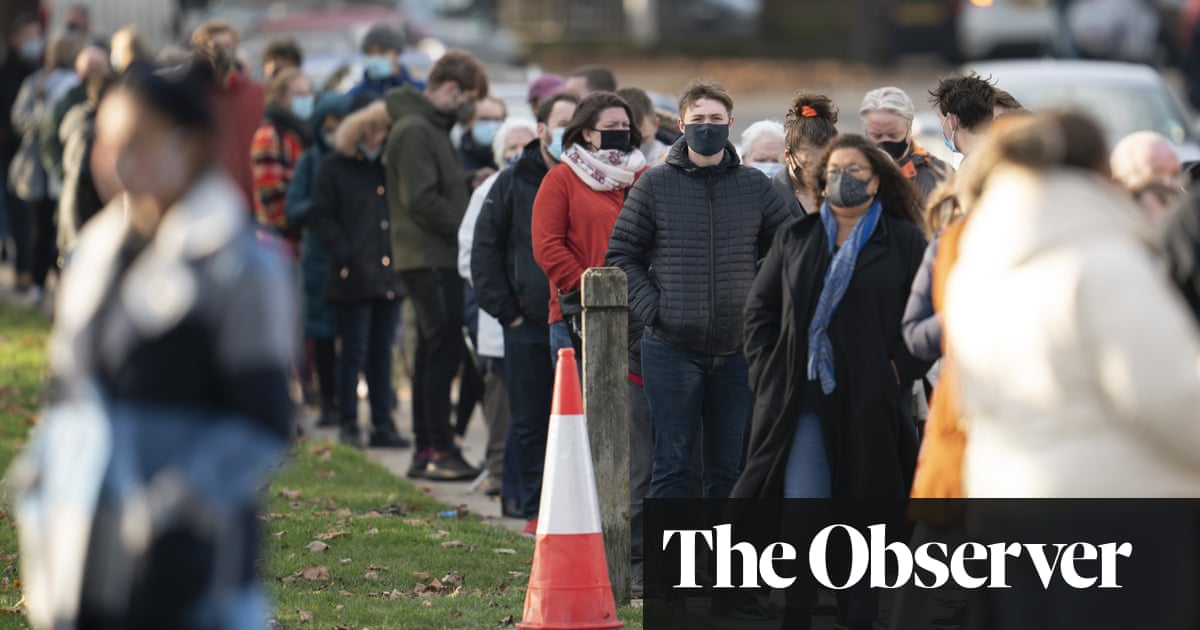 Rapid testing is detecting large numbers of people in Liverpool with Covid who have no symptoms, the city’s officials have said.

Nearly a quarter of positive tests in the past seven days were discovered by the lateral-flow-testing pilot scheme, and Liverpool’s mayor, Joe Anderson, said it had played a role in reducing the spread of the virus.

“Mass testing in itself isn’t a panacea – it never will be,” Anderson told the Observer. “But it’s a tool in the armoury. We’ve got a couple of thousand people now that have tested positive within the pilot, and that means 2,000 fewer people are spreading the virus.”

Liverpool is conducting the first city-wide testing regime, a pilot for the “operation moonshot” attempt to provide weekly testing for the whole of England.

By Friday, at the end of the first two weeks of the scheme, nearly 153,000 tests had been carried out in the city, of which 93,028 had used Innova lateral flow tests, which can provide results within an hour without using a laboratory, much faster than the standard polymerase chain reaction (PCR) tests available across the UK.

People in Liverpool with symptoms are asked to take a PCR test and there have been 1,897 positive results since the pilot started on 6 November. But a further 597 people without symptoms were identified by the lateral flow tests – 24% of all the positive diagnoses. “They were people who were asymptomatic by definition – they did not know they had Covid-19 when they presented for testing,” said Professor Louise Kenny, the executive pro-vice-chancellor of the faculty of health and life sciences at Liverpool University, which is running the pilot scheme with the city council.

“They were potentially infectious and, notwithstanding lockdown, they were certainly in contact with people in their social bubble.”

Testing sites have been set up across the city in 37 churches, hotels and gyms, as well as at Anfield stadium, with about 2,000 military personnel helping conduct the tests after a request from Anderson.

“Until we get a vaccine, we need to look at all the tools available to us – [lateral flow testing] can play a role,” Anderson said. “We’re training care home workers to administer this so we can try to get people back to visit parents and family members and carers.”

Liverpool has seen the rate of infection fall from nearly 700 cases per 100,000 people on 8 October to 260 on 15 November, although much of the decline came before the testing pilot began.

Matt Ashton, Liverpool’s director of public health, said he was “really pleased” with the “very strong” progress so far. “We have a much greater understanding of how best to deploy testing in practice, where the virus is in the city, and how we need to refine the testing offer going forward.”

Kenny said it had been harder to reach people in the poorer areas in the north of Liverpool. “Testing has been incredibly successful in the south – we’ve had greater than 50% uptake in some suburbs. But we know community transmission in those communities is relatively low.

“In the north of the city, where most of the economic deprivation is clustered, areas have high population density, a lot of multigenerational housing, a lot of social housing and social exclusion. Making testing available on their doorstep is really important.”

The pilot scheme is due to finish in two weeks’ time, but the government plans to roll out similar projects in 67 other towns and cities in England.

Several scientists and public health experts have criticised the scheme as flawed and unscientific. Writing in the British Medical Journallast week, Muir Gray, a former director of the UK National Screening Committee, and Mike Gill, a former regional director of public health, said many asymptomatic people who test positive are “probably relatively uninfectious”.

They joined others including Professor Allyson Pollock of Newcastle University and Professor Jon Deeks of the University of Birmingham in questioning the accuracy of the Innova test.

A study by scientists at Public Health England’s Porton Down labs said that the test was “effective in identifying the cases who are infectious and most likely to transmit the disease”. But Gill and Gray disagree. “The false positive rate of 0.6% means that at the current prevalence in Liverpool, for every person found truly positive, at least one other may be wrongly required to self-isolate,” they wrote. “As prevalence drops, this will become much worse.”

In Liverpool anyone testing positive with a lateral flow test has been asked to confirm the result using a PCR test.