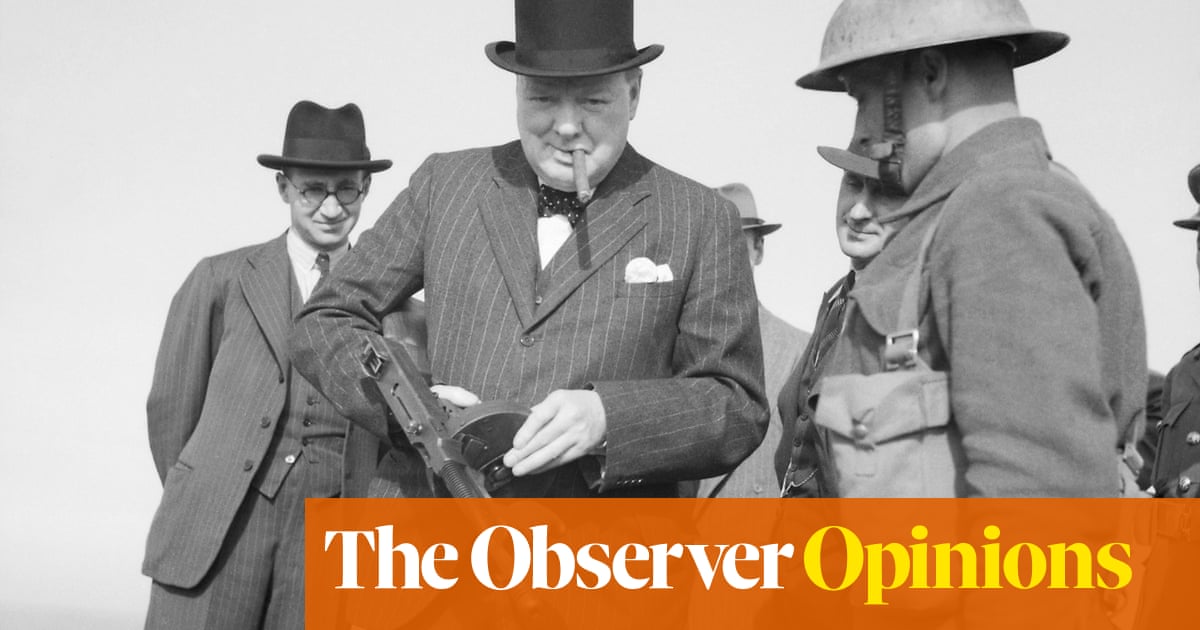 Winston Churchill should be held to account when Britain throws itself out of the EU. Who is to blame for breaking up and impoverishing the United Kingdom? Churchill, by his followers’ own admission. Who is responsible for the border in the Irish Sea, the food shortages, the irresistible rise of Scottish nationalism, the needless blows to the stricken economy of a plague-ridden nation? No need to ask: Winston’s been at it again.

Not the Churchill of history, but a Churchillian delusion that has been a generation in the making. Its falsity will become apparent on 1 January. Until then, Tories can still pretend that their promises that Brexit would enrich us weren’t false. They can still opine that once “Boris” has completed Brexit he can move on to levelling up or tackling Covid or whatever other issue flits through his half-formed mind. They still don’t realise that in a few weeks their words will sound as absurd as saying: “After I’ve broken my legs, I will run a marathon.”

Churchill has haunted the Brexit debacle like a ghoul. Brexit was sold with the growling of Churchill wannabes exploiting English exceptionalism. Churchill stood alone in 1940 against a dark continent, they said, and we can do so again. Johnson knew how to exploit the national fantasy. He began his advance on Downing Street by writing a Churchill biography. “Winston Churchill would have joined me on the battle bus,” Johnson said during the 2016 referendum campaign. Winston would have agreed with him that Brexit was the chance “for the British people to be the heroes of Europe” by standing up to the successor state of the Nazi and Napoleonic empires. In 2019, Nigel Farage opened Brexit party rallies to the sound of air-raid sirens.

Today, Britain looks isolated in an indifferent world because Johnson used Churchill as the excuse to racially abuse Barack Obama. Joe Biden and the Democrats are convinced that Johnson is the British Trump because, when Obama urged Britons to stay in the EU, Johnson decided that the “part-Kenyan president” was motivated by an “ancestral dislike of the British empire, of which Churchill had been such a fervent defender”.

In Johnson’s sub-Birtherist conspiracy theory, Obama had revealed his inner Mau-Mau by removing a bust of Churchill from the White House. Leaving aside that Vladimir Putin and all others who genuinely dislike Britain welcomed Brexit, the story wasn’t even true.

The cult of Churchill on the American as well as the British right might be redeemed if it carried forward the anti-fascism of the wartime coalition. But there is no guarantee that support for Churchill quarantines a politician against the heirs of fascism. Steve Bannon boasted how he had advised Johnson on how to undermine Theresa May’s premiership. Johnson said he had met Bannon but never “colluded” with him. By Bannon’s account, however, Churchill drew the far-right thug and the “mainstream” Conservative together. “He wrote a really great book on Churchill,” Bannon said. “That’s one of the things I told him.”

By this point, historians and members of the Churchill family will be screaming that the Churchill delusion has little to do with the real Winston Churchill. Britain did not stand alone in 1940. It was at the head of a vast empire, able to command millions of black and brown troops written out of history by the right. Their elevation of Churchill belittles the memory of the Second World War as a “people’s war” and, above all else, a war fought as a partner in a global alliance. The Churchill of the Blitz and the Churchill of Brexit seem barely on speaking terms.

The best books about Brexit aren’t only or even mainly about Brexit. The Churchill Myths, newly published by the historians Steven Fielding, Bill Schwarz and Richard Toye, shows that in nationalist frenzies fantasies always beat facts. As Britain’s decline accelerated, so the need for Churchill grew, they write. Whenever Churchill’s name is mentioned on the right now, you can be sure it will be as an incantation to call up English exceptionalism.

I interviewed the historian Andrew Roberts in the 1990s, as he was building the cult Johnson was to adopt and exploit. Churchill was an ambiguous figure to the reactionaries of the day. In power in the 1950s, he was too tolerant of trade unions and the welfare state for their liking and too willing to allow black immigration.

Roberts and then Johnson replaced the Churchill of history with a populist who stuck two fingers up to the treacherous Conservative establishment, just as Johnson was to turn on the “enemies of the people” in today’s establishment. (If you want to see the story made flesh, look at the make-believe scene in the film Darkest Hour, where Churchill draws strength from the support of the common people on the London underground.) Johnson and Roberts made Churchill a little Englander who stood up to Europe by standing alone. They get round Churchill’s undoubted racism, exceptional even by the standards of the time, by saying his belief in the racial supremacy of the English-speaking peoples gave him the confidence to fight Hitler. (It took a racist to oppose a fascist, apparently.)

Commentators who see the Brexit movement as imperial nostalgia miss the point, I think. It’s an isolationist movement fuelled by nostalgia for a war hardly anyone left alive fought in and a paranoid fear that Brussels is Hitler’s Berlin. Combined, they produce the fantasy that Britain can again stamp its foot and get its way.

On 1 January, the British will be the losers of Europe rather than Johnson’s heroes. The reckoning must include a full settling of accounts with Johnson, Roberts and the other quack Churchillians, who led their country to ruin by pretending we are exceptional when we struggle to be ordinary.

If we do not, the right won’t apologise for its false promises. It will growl and chew on an imaginary cigar and say the lost jobs and break-up of the country are as nothing compared to the sacrifices previous generations made in – what else? – Winston Churchill’s war.