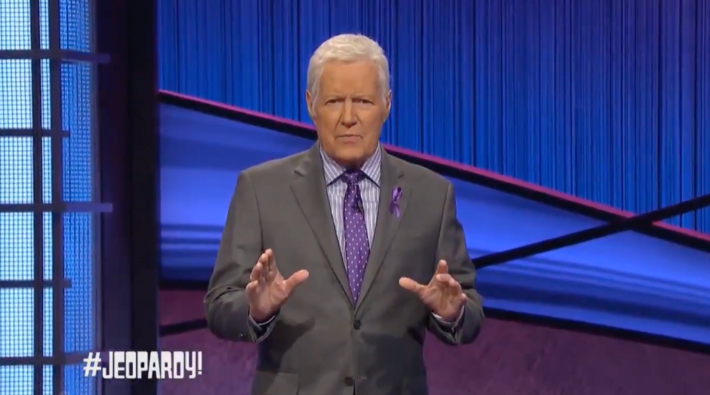 Thursday is World Pancreatic Cancer Day, and for Jeopardy! fans, it’s a day that serves as an opportunity for remembrance. Earlier this month, longtime host Alex Trebek passed away following a battle with the disease at age 80. He was diagnosed with Stage IV pancreatic cancer in early 2019 and battled for more than a year, and through Christmas Day, Jeopardy! will broadcast episodes that were aired with Trebek as host from before his passing.

It’s unclear exactly when Thursday evening’s episode was shot, but before things kicked off, Trebek spoke to those watching at home about World Pancreatic Cancer Day. While donning a purple tie, shirt, and ribbon on his jacket — purple is the color used to honor those who have battled pancreatic cancer, and the show’s official Twitter account encouraged people to wear it on Thursday — Trebek urged people to take this seriously.

“Before we get into today’s match, a word about today,” Trebek said. “Today is World Pancreatic Cancer Day, and if you or anyone you know has developed some of the symptoms that I have talked about in the past, then by all means, get to a doctor, get yourself tested, I want you to be safe. This is a terrible, terrible disease.”