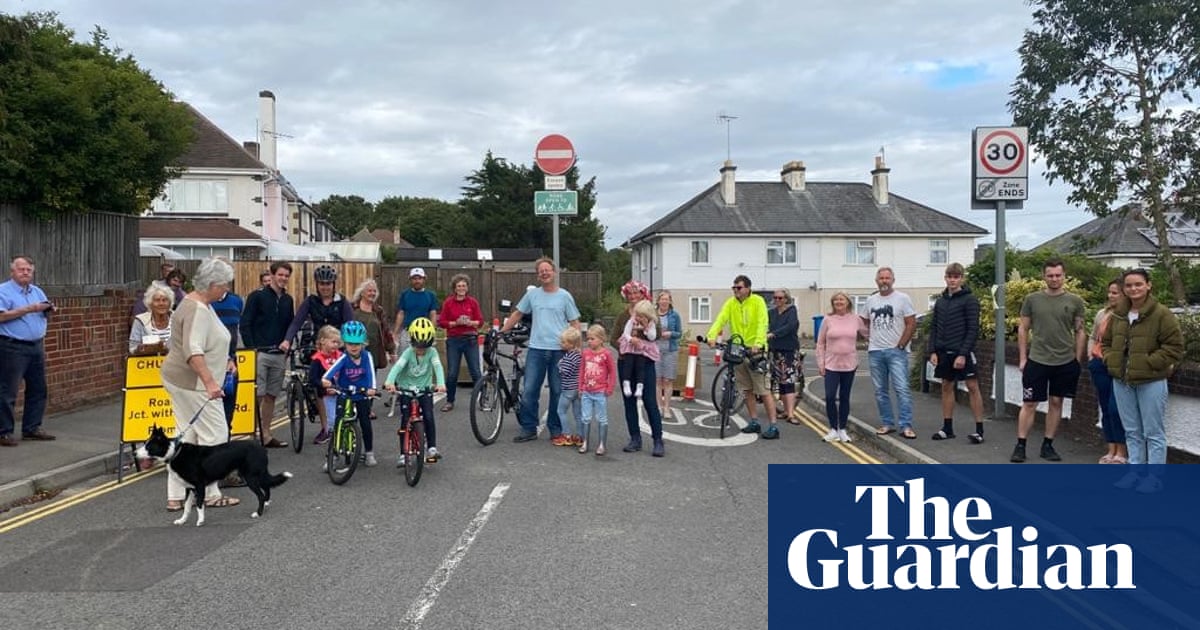 In Poole, 41-year-old teacher Kate Salter said a low-traffic neighbourhood (LTN) had transformed her community. Salter was involved in proposing the measures to her council, which came into force at the end of August.

“As soon as the planters went in, there was a change in the volume of traffic. It was quiet, you could hear birds singing, and neighbours were having a chat for the first time. Before, you couldn’t hear each other over the road because of the noise of the busy traffic, and wouldn’t just pop over and leave the kids. Now we’ve all become really good friends,” she said.

“There’s an older lady who lives on our road, and her bike got stolen. We all put in a tenner and bought her a new one. That wouldn’t have happened before.”

“People are changing their behaviours already, like walking, picking up their children rather than driving,” she added. “If more people cycle and walk, there will be less traffic. I have to drive sometimes, but it doesn’t add much time to my journey, and that sacrifice is worth it to feel safer on the road and have that community spirit.”

However, not everyone living under an LTN has found the transformation a positive one.

Daniel, 33, lives on a main road leading to the South Circular in London’s Hither Green, where an LTN was introduced soon after the first national lockdown in March. He felt that the measures deepened divide between wealthier and poorer residents, increasing pollution for those living near main roads.

“The LTN measures have moved traffic away from the Manor House side of Hither Green where a three-bedroom house costs £1m, to the poorer side nearer Catford, where we live,” he said.

“The traffic leading on to the South Circular is now gridlocked every day and created a massive bottleneck. The streets under the LTN are really nice, but they’ve just pushed it all towards Catford,,” he added.

Mythbusters: eight common objections to LTNs – and why they are wrong

Daniel said he supported a greening of his local area, but felt it should be approached differently. He suggested the council focus on incentivising people to take public transport, or increasing opportunities for charging electric cars.

“We all want a greener London but this is no way to go about it,” he said. “If you want fewer car journeys overall, then residents need more incentives and less punishment. More carrot, less stick.”

Daniel’s concerns were echoed by others who contacted the Guardian via a call out. One of those was 35-year-old engineer Yacob Ahmed, who lives on the edge of Hyde Park in Leeds where an LTN was implemented in early November. His opposition to the scheme centred largely on the impact on the business community.

“I’ve spoken to businesses who are very concerned,” he said. “The postmaster has said if it keeps impacting him, he’ll have to close up. Deliveries and suppliers are being affected, with couriers getting lost and lorries unable to drop off supplies because the road blocks are taking up parking spaces.”

According to Ahmed, the measures didn’t make the streets safer.

“It’s not safer if cars and lorries are stuck, and having to reverse back out on to the main roads, and in areas without cars going up and down, they’ve effectively created mugging hotspots,” he said.

“We care about the environment too, we care about air quality too,” he added. “I just don’t think the landscape of Hyde Park is compatible with such a scheme.”

But other readers, who were initially opposed, found that living with less traffic and more peace eventually changed their minds. Emily Holman, a 33-year-old commercial manager in football who lives in Sydenham, south London, initially opposed the introduction of the LTN on her road in late June, but said her concerns were mainly about the lack of communication.

“It was a shock,” she said. “Some flower planters just arrived one day, and then they put the bollard up. I would have expected to get a note or letter through the door, and it would have been great to get consultation.”

Since the LTN was introduced, Holman has changed her views, and hopes it will remain in place after the trial period.

“It is an inconvenience from a driving point of view, but from a resident’s point of view I prefer it,” Holman said. “We’ve lived in the flat for six years, and have seen a number of car crashes and bumps. With the road closed, that’s stopped.”

“If they’d educated people about the fact that they were doing it to improve air quality, there would have been a better reception,” she added.

‘I got it wrong. Since the changes it’s become more vibrant’: life in an LTN

One 45-year-old resident, who preferred not to be named, praised the handling of the issue by her local councillors in West Greenwich, who she said have been engaging with residents for nearly four years. She said that before the six-month trial of the LTN, the councillors held workshops and meetings, open engagement events for people to assess the plans, and conducted a survey with 900 people, modifying the scheme according to their feedback.

Before the LTN was introduced in late August, she described her street as “hideous” with pets hit by vehicles, near misses involving children and arguments over log-jammed traffic.

While she said the scheme had been “controversial”, on her road the positive changes since the introduction of the LTN had been immediate.

“You can see children on their bikes, and my neighbour who has lived here for 40 years said he’d seen children playing hopscotch in the street for the first time,” she said. “It’s like the old days. It’s created a haven.”