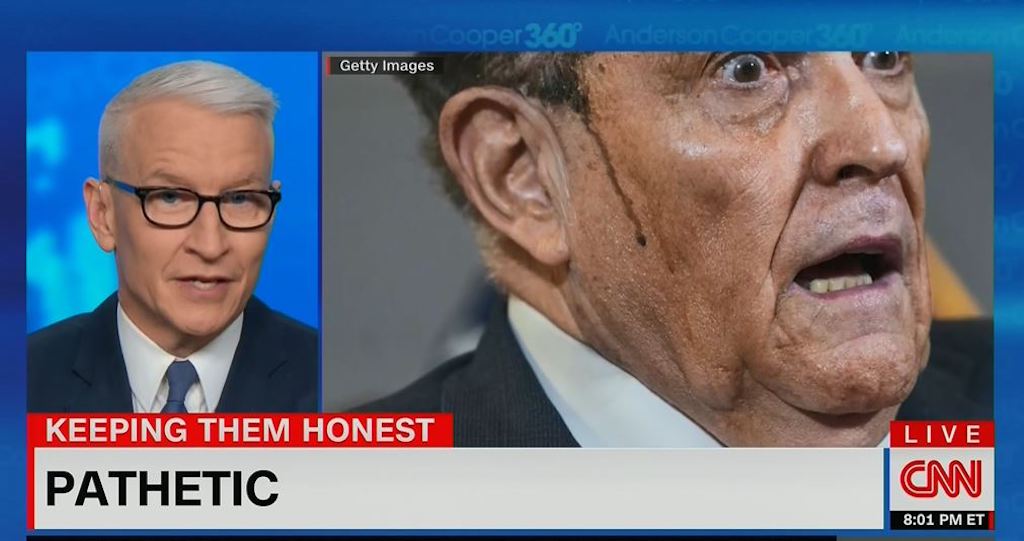 On one hand, it would be hard for Rudy Giuliani — or anybody, really — to best the Four Seasons Total Landscaping fiasco in terms of sheer weird absurdity. On the other, maybe he did? On Thursday — almost two weeks after the 2020 presidential race was called for Joe Biden — the outgoing president’s lawyer once again embarrassed himself with an inventively wackadoodle presser. It was marred by black mystery goo and — why not! — random odes to My Cousin Vinny. And that’s not even considering the wild nonsense he was spewing about widespread voter fraud he could not prove.

It’s the kind of debacle that breaks even the most seasoned journalist. Seasoned journalists like Anderson Cooper. That night on CNN, the anchor weighed in on Giuliani’s literal meltdown of a presser, and what could he do but just mock it two ways from Sunday. The chyron for the entire segment was brief, not filling out the entire space. It read, simply: “Pathetic.”

Can the producers from Intervention please get in touch with his people and set something up? Legendary New York columnist Jimmy Breslin once described Giuliani as “a small man in search of a balcony.” Now he’s just a hot mess. The man once described as America’s mayor appeared sweating with newly applied black hair dye rolling down his face. It wasn’t a press conference, it was a clown show, without any actual meaning or reality.

Cooper continued to play numerous clips from Giuliani’s spluttering, conspiracy-mad appearance, then rip them to shreds. He pointed out how he kept bringing up accusations that have already been shot down by various courts, as well as invent a new, also baseless one about voter fraud in Philadelphia (followed by a liberal amount of Philly bashing).

By the end, Cooper admitted one journalistic mistake on his part: “I said it was a clown show. I apologize to clowns.”