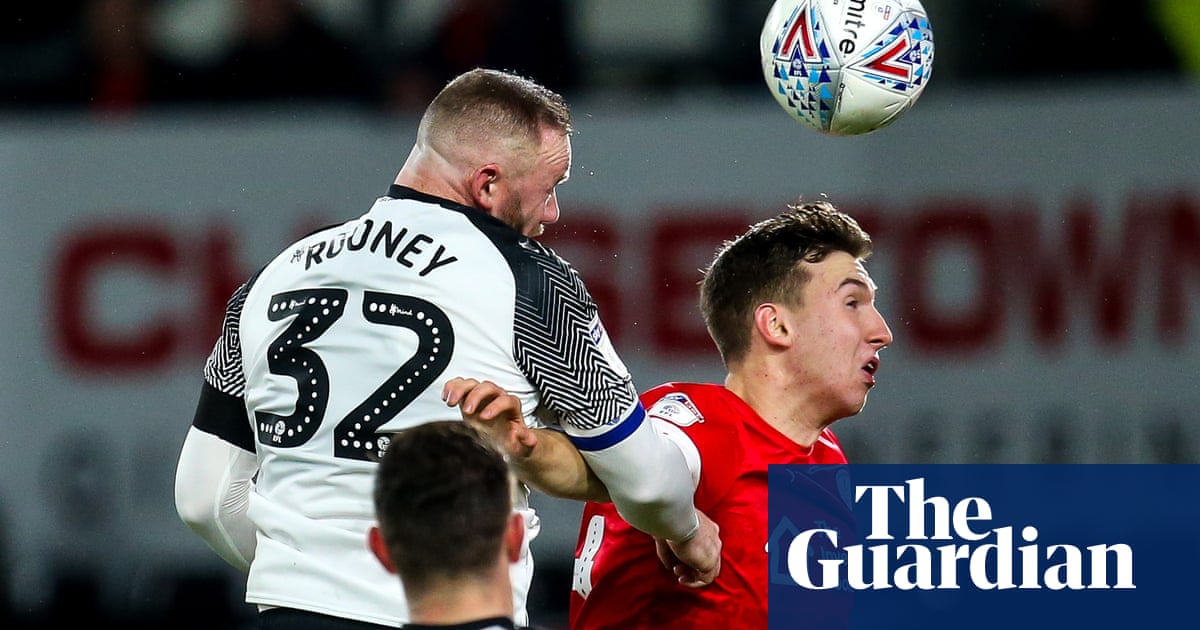 Wayne Rooney has thrown his weight behind the campaign to investigate the links between football and later-life dementia, revealing he would support any moves to reduce heading in training and ban it in junior games.

“When I was in America my son would play in games where heading was banned,” the Derby player-coach said. “I found that strange to watch but the kids just got out of the way if the ball came at head height and carried on as normal. I do think more research needs to be done in this area, because Nobby Stiles and Sir Bobby Charlton have been in the news recently. It is sad if anyone dies young and even sadder to think it might be because of playing football.”

Why has it taken 50 years for football to connect heading with concussion? | Andy Bull

The former England forward is one of four coaches, along withLiam Rosenior, Shay Given and Justin Walker, in charge of Derby’s visit to Bristol City on Saturday, as the Championship’s bottom club looks for an upturn in results after the departure of Phillip Cocu.

“It’s been a strange week but everyone at the club is excited about what lies ahead,” Rooney said. “I would like to say a big thank you to Phillip for all his work and help, but a change was needed. We weren’t on a great run of form, but we have an opportunity to change that on Saturday.”

Rafael Benítez has overtaken Rooney as the bookmaker’s favourite to be the next Derby manager and the player-coach was diplomatic when asked whether he wanted the position permanently. “We need to get the next two or three games out of the way first and we need to start winning,” he said. “That’s the most important thing. I have never made any secret of my ambition to go into management, but right now we are doing a job together and we are all hoping we can turn this situation around.

Wales are promoted! And is Foden the new Grealish?– Football Weekly Extra

“As a player I have worked with some very good managers – possibly the best of all time in Alex Ferguson – but while you can pick up a few things from different people and situations it is important to be able to work with the players in front of you.

“Together we are trying to see what works and maybe trying to bring a little simplicity back because we might have been overcomplicating things. As a player you learn to keep things simple until your confidence grows and then you can try something more difficult.”

Rosenior, a former player with Fulham, Reading and Hull, said he was optimistic after an encouraging week on the training ground. “The response from the players has been magnificent. In terms of team selection they have made our jobs really hard,” he said. “Clearly we need results to change but there are still 35 matches to go and that’s almost the length of a Premier League season.

“We have plans we hope will come to fruition, but the first plan is to win the next game. We don’t want to be sitting here, 24th out of 24 teams, talking about ambitions further down the line than getting the next win under our belt.”