ALL PART OF THE MASTERPLAN?

While the news that Pep Guardiola has signed a two-year extension to his contract that should keep him in charge of Manchester City until the end of the 2022-23 season is undeniably important, it is one of those stories that didn’t come as much of a surprise. The Fiver knows better than anyone that when you’re handsomely remunerated for excellence in the line of football-related duty, working daily in an state-of-the-art environment that is lavishly tailored to your every need and employed by bosses who would happily break the bank to keep you on board, there’s no real need to play hardball when it comes to pledging two more years. And so it came to pass, as Pep was pictured beaming broadly with expensive pen poised over paper, looking for all the world like Donald Trump pretending to work in the Oval Office, except without the general air of confused ineptitude, upside-down pen and blank sheet of paper.

“Ever since I arrived at Manchester City I have been made to feel so welcome in the club and in the city itself, by the players, the staff, the supporters, the people of Manchester and the chairman and owner,” parped Pep, having applied his John Hanc0ck to the new deal. “Since then we have achieved a great deal together, scored goals, won games and trophies and we are all very proud of that success.” Having thanked his employers for their faith in him, he added: “The challenge for us is to continue improving and evolving and I am very excited about helping Manchester City do that.”

Quite whether Pep will be able to do that remains to be seen. While nobody can question his ability to put together a title-winning side, something he has achieved at Barcelona, Bayern Munich and City, he has never before stayed in any managerial post long enough to try to build two. Like a big-name Manchester-based manager before him, he must build a team capable of knocking Liverpool off their perch, while also guiding City to that elusive first Big Cup triumph. Think of it as a particularly gruelling and humourless episode of Taskmaster, with the British football media looking on from their throne as they prepare to sit in sneering judgement.

And of course, with Lionel Messi out of contract at Barcelona next summer, talk is already rife that Pep has got his ducks in a row in a bid to help convince the Argentinian to sign for City, after being linked with a move to Manchester last summer. “I’m tired of always being the problem for everything at the club,” sighed Leo on his return from international duty, in response to recent accusations from Antoine Griezmann’s former Mr 15% that he had treated the French striker deplorably. The chances of the world’s best player finally moving elsewhere look pretty high, and unless Barnsley turn his head with a better offer than the one they recently made Mario Balotelli, Manchester City looks as likely a destination as any.

QUOTE OF THE DAY

“I’m not coming back just to come back, I’m coming back to reconquer my position in world football” – Lyon superstar Ada Hegerberg gets her chat on with Suzy Wrack about her recovery from knee-knack and subsequent tibia-gah. 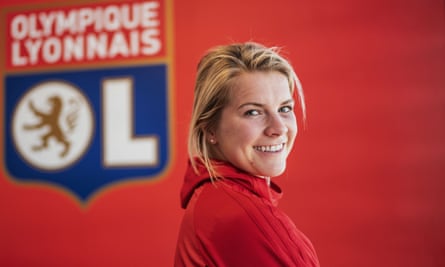 “When the team that I have supported since childhood wins, the joy factor of my weekend generally rises by about 10 or maybe 15%. However, when my team’s historical, or local rivals loose, I’m over effing moon. Is it time that I gave up football?” – Chris McHallem.

“Given the non-ability-to-score misfortunes of Republic O’Ireland lately, may I suggest that the ‘O’ be replaced by a ‘0’?” – Gerry Rickard.

“Can I be the first of 1,057 people to suggest that Karren Brady’s complaints about state money being used to the benefit of Premier League clubs (yesterday’s News, Bits and Bobs) would find a more sympathetic audience if she wasn’t vice-chairman of Taxpayers FC” – Ed Taylor (and no others).

Send your letters to the.boss@theguardian.com. And you can always tweet The Fiver via @guardian_sport. Today’s winner of our letter o’the day is … Gerry Rickard, who wins a copy of Glove Story 2 – Another Book for Every Goalkeeper, Past and Present, by Rob Stokes [postage available to UK only, sorry – Fiver Postal Ed].

Rebekah Vardy has brought a libel action against Coleen Rooney only as a last resort to “vindicate her reputation”, the high court was told at a preliminary hearing of the high-profile dispute between the pair. 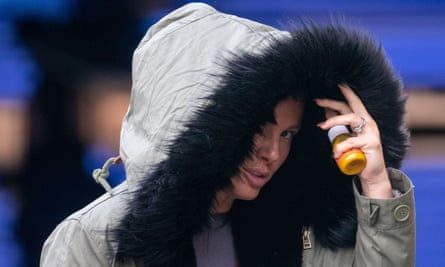 Rebekah Vardy arrives for a training session at the National Ice Centre in Nottingham earlier on Thursday as she prepares to take part in, er, Dancing On Ice 2021. Photograph: Joe Giddens/PA

They’re dancing on the streets of Blaenau Ffestiniog (socially distanced, of course) after Wales secured promotion to the top tier of the Nations League. “If you could bottle that feeling and see what you’ve seen in the changing rooms you’d make millions,” cheered caretaker manager Robert Page.

Fifa has announced measures that will lead to clubs facing fines and transfer bans if they discriminate against players during pregnancy. “There [are] too many questions for me about what maternity leave consists of,” warned Watford striker Helen Ward. “It’s a tough subject and one that needs a lot of work.”

With Euro 2020/21/?? in mind, Olivier Giroud could look for a move from Chelsea in the January window.

Paul Tisdale is the new manager of Bristol Rovers. “His ambition and long-term goals mirror that of the club’s ongoing strategy, to build a Bristol Rovers DNA,” whooped chief suit Martyn Starnes.

Barry Glendenning rigs up his chalkboard to peel through the chaos and select a Premier League team of the season thus far. Because: why not? 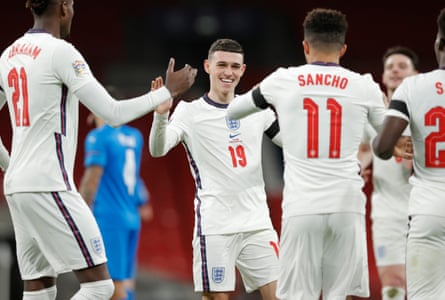 Oh, and if it’s your thing … you can follow Big Website on Big Social FaceSpace. And INSTACHAT, TOO!