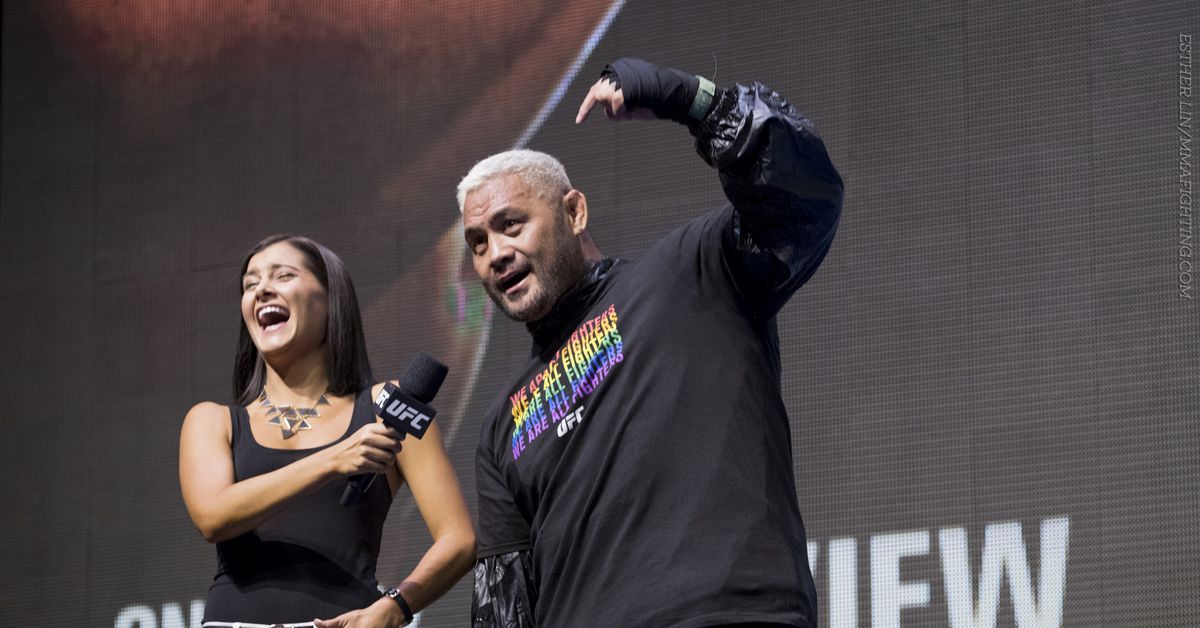 Mark Hunt is a legend in combat sports. A K-1 World Grand Prix champion, Hunt is also one of only two men to have competed for both a UFC and Pride heavyweight title. But over the last few years, Hunt has become as known for his battle outside of the cage as for his fights inside it. Following his loss to Brock Lesnar at UFC 200, a fight which was later revealed Lesnar tested positive for performance enhancing drugs, Hunt waged war with the UFC, suing the promotion, Lesnar, and Dana White, alleging a variety of misconduct, including fraud, breach of contract, and racketeering. Ultimately, Hunt’s lawsuit was dismissed by the district court of Nevada, but last month, Hunt’s legal team appealed the dismissal and now Hunt is in a holding pattern, waiting for a final decision to continue forward with his suit.

“My personal lawsuit is about the steroids and making it an even playing field,” Hunt told Submission Radio. “I never got a fair go in this company. They keep getting these cheaters and putting them before health, money before health, people and fighters’ health. And that got to a stage where I just had enough of it and I wasn’t getting anywhere. And this will go to trial, which is where I want to go with this lawsuit. And then we’ll see what actually happens, we’ll see what else they’re hiding.”

The last few years of his UFC career, Hunt became one of the most vocal opponents of PEDs in MMA and particularly of the UFC’s handling of them. He also became highly critical of the UFC’s pay structure, feeling that the UFC does not adequately compensate their fighters. And Hunt isn’t alone. A number of fighters have spoken out against the UFC’s compensation this year, and Hunt says there’s good reason for that: because it’s “garbage.”

Things weren’t always bad between Hunt and the UFC. There’s a well-known story about how when Zuffa acquired Pride FC, they offered to buy Hunt out of his contract instead of offer him any fights. Hunt refused, wanting the fights he was owed, and he then went on the best run of his MMA career, culminating in an interim heavyweight title shot against Fabricio Werdum. But at this point, Hunt says it’s hard to look back fondly on his time with the organization, given all the bitterness that has ensued.

“Yeah, it’s gone real negative because the bad outweigh the good memories,” Hunt said. “At the end of the day, I ended up fighting against them and not the actual competitors. Not fighting for the world title, fighting to make it even, and realizing this isn’t a fair fight here and I’m never gonna get anywhere unless I put up a lawsuit against these guys. It just ended up being bitter. All the good memories were drowned out by the bad.”

Fortunately for Hunt, that part of his career is now over. Hunt left the UFC in 2018 and has not competed since. That will change next month though when Hunt faces former professional rugby player turned professional boxer Paul Gallen in a boxing match on Dec. 16 in Sydney, Australia. For Hunt, it’s an opportunity to clear the air as he nears retirement from combat sports.

“I’m a fighter at heart,” Hunt concluded. “I wanted to finish my career happy instead of being so bitter at fighting and fighting in general. Especially how they run things. I mean, yeah it was a good offer [to fight Paul Gallen]. Things have worked out well, we made a good deal. And it will be one of the biggest events in fighting on this card here in my home town, which I think is awesome. So, what better way than to finish it off with a couple of boxing fights and then move on, I think.

“I want to have six more fights, to be honest, and finish my career happy.”

Response. Mike Perry answers domestic violence allegations: ‘I don’t mean harm on nobody unless we sign a death waiver’.

Retirement. Donald ‘Cowboy’ Cerrone: ‘This is the last run … I don’t have much left in me, timewise’.

Marlon Moraes in the WSOF.

Well, here we have another MMA movie – with Edson Barboza,

UFC Unfiltered. Interviews with the Shevchenko sisters and Alex Perez.

Still open for a scrap in January…see you there.

People want to talk shit and then when I defend myself I end up making people feel insecure about themselves. Yes I have a healthy ego, even when the cards are stacked against me I still think like an absolute boss. That will never change

How about our good buddy Chael a known steroid user, how did that work out for him?

Daniel wishing down on my star will never make yours climb any higher. I’ll leave you with that

First time watching the full fight back, great fight to watch even better to be in, enjoyed the commentary from @bisping, can’t help but be disappointed with fighting the wrong game plan of long and calm falling into what we believe Morono was going to come out and do, the 1/2

fight game is a punishing game, little damage apart from bruising I’m ready to rock and roll again, this all will be the greatest chapter in my book some day, trust that excited for what’s next and ready to take heads!