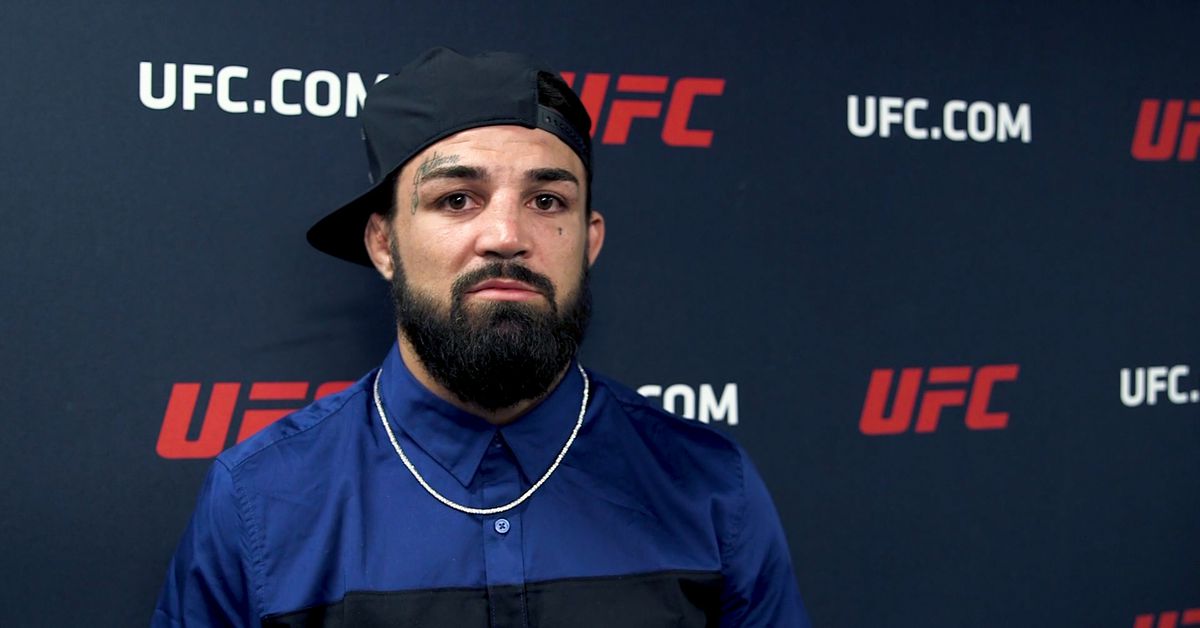 Mike Perry answered allegations of domestic violence by his ex-wife Danielle Nickerson during UFC 255 media day Wednesday, denying charges he abused her during their relationship.

“Yes, I deny the allegations that our relationship, if you want to call it that, had its ups and downs, and it’s long past due,” Perry said. “We’ve been legally divorced, and there’s just nothing really to back what she’s saying.”

Nickerson, who divorced Perry in July, accused Perry of committing domestic abuse “a handful of times” in an interview this past month with MMA Junkie. She alleged one instance of abuse left her with multiple injuries that she documented with photos and led to Perry’s mother call 911, fearing for her life after Perry allegedly menaced them outside his mother’s house during a confrontation.

Nickerson in July filed a protective order against Perry that was denied by a judge who said “general relationship problems and uncivil behavior” did not qualify as domestic violence as she claimed in the order. Perry, who was not charged with any crime related to Nickerson, previously released a statement denying his ex-wife’s allegations, saying “I did not put my hands on my ex at any point in our short-term marriage.” Perry cited alcohol rehab for helping anger management issues and said he’d realized “I’ve said some things in the past that do not put me or what I stand for in the best of light and for that I apologize.”

The allegations came to light three months after the UFC ordered Perry to attend substance and behavioral counseling and halted his octagon career until he completed treatment. The promotion acted after Perry was caught on camera assaulting an older man after a dispute in a bar in early July. Police said the UFC welterweight in fact assaulted three people, sending one to the hospital with a concussion, though he avoided jail time because the incident was classified as a misdemeanor.

In late September, the promotion scheduled Perry to face Robbie Lawler, who was later replaced by Tim Means when the ex-champ was forced to withdraw.

During the virtual media day, Perry, who’s previously been prone to outbursts of anger toward the media, calmly answered tough questions about his past and how he came to his current fight.

“I feel that the truth is always out there, and I’m grateful for my opportunities, especially with all the things that seem to come against me,” he said. “I’m still here. I believe that I’m a good person, and I don’t mean no harm on nobody unless we sign a death waiver.”

Still, he repeated his denial that he had previously abused Nickerson. On the night the 911 call was placed by his mother, he said he drove his car over his mother’s lawn and she moved quickly to stop his behavior after he demanded a conversation with Nickerson.

“I did not assault [Nickerson] that night, and I don’t believe that necessarily those allegations were made about the night that that 911 took place, because the night that that took place, what happened was Danielle just went over my mother’s house, and I went over to talk to my mother to tell her to come outside and speak to me, and my mom said no, so I was like, ‘What the heck. Can we have a conversation?’ So my mom got upset with me because I was mad that she wouldn’t go tell that girl to come outside and have a conversation with me. Whatever. It’s cool.

“[My mom has] always been overdramatic and acting up since her and my dad had me, because my dad was a wild dude, so she always expected something from me, and that’s probably one of the reasons I never, ever disrespected my mother, ever. She looked out for me all the time growing up, and I looked out for her from a young age. My mom’s a hard worker; she’s been a server for a long time. I always tip my servers well because I want people to tip my mom well. I’ve got respect for my mom, especially as a martial artist. That’s one thing we do martial arts for – we want to say about our mom’s kids that our mom raised some tough kids, or she means business. You see what I’m saying? That’s what happened with the 911 call.

“The first time I’ve ever looked at my mom sideways by driving across the yard, she called the cops and said she feared for her life. That’s my mom. She’s sorry now. She’s never had nothing she said come out. Now, she’s thinking about it. But it’s all good, because she was going for the jugular. She was like, ‘I’m going to get you in trouble then.’ So a mom don’t play. I don’t play with moms.”

Perry told MMA Fighting he’s now reconciled with his mother, and he credits the mother of his child and his current girlfriend, Latory Gonzalez, for making him a more balanced person as he gets closer to the birth of their son.

“Being with Latory, I think she’s so smart and how she keeps things simple and tries to stay relaxed,” he said. “I can see things in a lot of fighters and athletes, and the way I described it, I go by Mike Perry, but my girl calls me Michael. I’m trying to be more Michael these days, and just be composed. I’ll be more composed in the cage.”

Gonzalez will be in Perry’s corner on Saturday night, joined by a friend named Matthew.

“He’s a good guy,” Perry said of Matthew. “He kind of just fell into the situation, and he’s helped out with me and Latory. He knows my boy Alex [Nicholson], and he and Alex have been working to be in the corner from this weekend, and I don’t know what’s going on with that. I wanted to give my buddy an opportunity, and I’m going to go to work on Saturday, me and the team.”

Asked whether Matthew was from the combat sports world, Perry said, “I mean, he knows some things about fighting. I mean, he’s in the world now, isn’t he? I like to do that. I like to bring people in. They thought my girl had no experience, but look at her now. Her and my son already got a win in the UFC corner, handling business.”

Perry raised a few eyebrows when Gonzalez served as his sole corner for a UFC on ESPN 12 fight against Mickey Gall. But he won a unanimous decision and got back in the win column after the first knockout loss of his career in a bout against Geoff Neal.

Perry said Gonzalez is the driving force behind his resurgence, and on Saturday, his team will go to work.

“I want to put beautiful things out into the world,” he said. “I’m sure our son is going to be a handsome little devil, for sure. Just excited to see where life takes us and how we’re going to have fun together. My girl seemed to grow up a lot over night. Maybe the mom is really coming out of her. She acts like my mom sometimes – call the cops on me for sure. I’ll worry about that.”