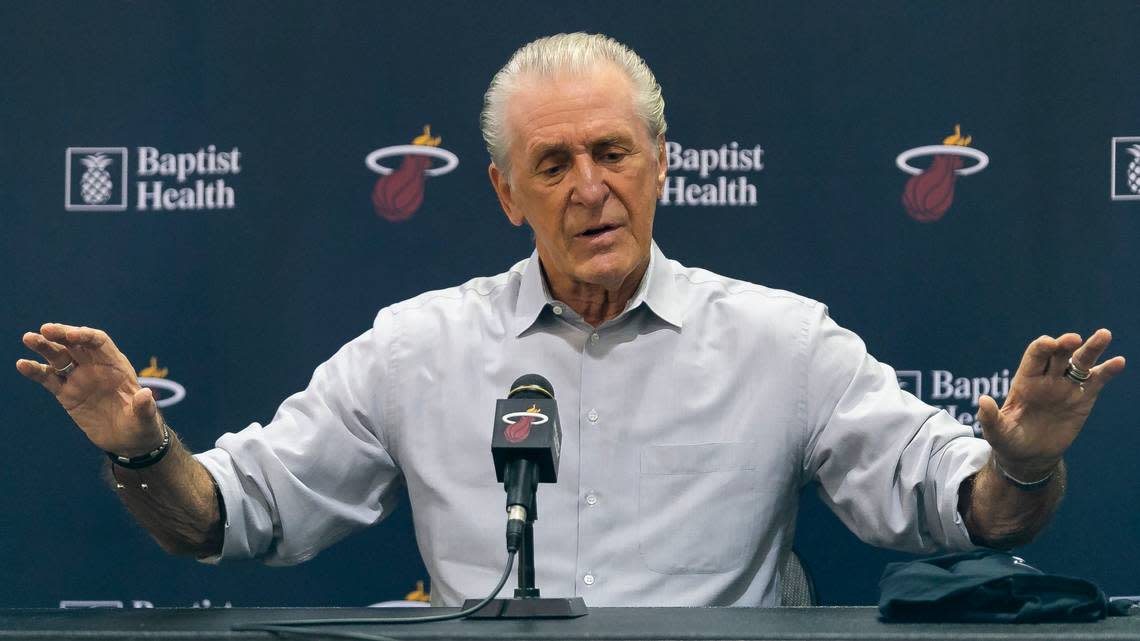 Heat president Pat Riley addressed the team’s selection of Memphis forward Precious Achiuwa in the NBA Draft and other issues in a late-night Zoom session with reporters.

▪ Riley on Achiuwa: “I felt tonight we did very well. We’re very pleased and happy with our pick, with Precious. We were looking for bigs like him that were quick, athletic, that could run, that could handle. Obviously, he’s an explosive player, plays above the rim. We were very, very impressed with him. He was in our wheelhouse and when we had an opportunity to draft him, we were very excited.

“We think we have probably one of the most underrated players in the draft and most likely – you could argue this – he might be the most athletic player in the draft. He has a real good upside, lot of talent. We’re real excited to have him. He fits in perfectly with how we want to play and fits in perfectly with Spo’s system defensively. He can play four positions defensively. He’s a rim runner. I’m just excited at 20 we could find a player of that quality.”

▪ With free agency starting Friday, Riley said: “I would like to run this thing back. When you think about the compressed schedule, I look at what happened the middle of August when everything intensified in a big way. Seeding games were good to get the team ready. Coach was experimenting. Once it started in August and ended in October and it’s going to start in December and end in July, you have almost two seasons where competition is really compressed.

“Running this team back and keeping continuity of what we had and seeing what happens with our free agents [is the plan]. We will have some flexibility under the tax to do some things.”

According to multiple sources, the Heat wants to bring back Goran Dragic and Jae Crowder and also has shown interest in Meyers Leonard and Derrick Jones Jr. All will be unrestricted free agents on Friday.

Does Riley want to add a rotation player from outside? He said yes and later said: “I don’t know if we will use that stuff [$9.3 million mid-level exception or $7 million trade exception, which cannot be combined], but if something presents itself, we will take a good hard look at it. I have great faith in our guys. I think we have great chemistry. But now we’re getting back to the business side of things. I totally understand what free agency means to players.

“With our free agents, we will sit down and talk to them. I feel good about it [keeping the free agents], but you never know what’s going to happen. If we do, we will be a team in rhythm. Not going to be a lot of learning. I feel good about it. I feel confident. If we don’t get everybody back, we do have a number of ways to fortify the team, to improve the team also.”

Can this team pick up where it left off, having advanced to the NBA Finals?

“I think they can. That’s one thing about Spo and his playbook; it doesn’t change too much. He’s developed a style he wants to play. When you have guys with basketball IQs that are real high [that helps]. Getting them in rhythm to play 5 on 5, that’s one of the advantages of trying to run the team back instead of trying to bring a group of new players in.

“It’s not going to be like the bubble. In the bubble, there was a real rhythm and routine of playing every 48 hours. That was a perfect schedule for players to play and recover and play and recover. It’s not going to be like that now…. We’re going to be back on the road, go on a plane, go to hotels. You have to deal with the possibility of COVID being a problem. We are heading into different territory. But when you have a team that… knows each other, it will be easier to get back on a horse.”

▪ Riley said Heat officials Adam Simon, Chet Kammerer, Keith Askins and Eric Amsler focused on the draft for several months but Riley said he got very involved in the past two weeks and watched film of Achiuwa and others.

He said one of those Heat officials spoke with Memphis assistant coach Mike Miller, a former Heat player.

“This is a great kid; great character,” Riley said. “Comes from Nigeria. Has been playing for six years and has really made incredible improvements. We feel we have a very mature 21-year-old, great upbringing. There is nothing there that is going to stop this kid from really improving from the standpoint of his work ethic.”

▪ Is it too much to ask for a rookie to help in this strange upcoming season without summer league?

“I don’t think it’s too much to ask. The only thing you have to watch out for is they probably haven’t played a lot of five on five. Players that know they’re going to be in the draft… These guys get up at 6 a.m. and lift weights for an hour and then work two hours on the court…

“And then come back [in the afternoon and at night]. Precious is that kind of guy. He’s already in great condition, from watching the guy play. If you watch him play, he can help anybody, if you want to pressure and get up and down the floor. It will be hard for any draft choice to come in. But if you’re hungry… you’ll compete for it and get yourself as ready as you can.”

▪ Riley did not attend Achiuwa’s private workout with the Heat but studied him on tape.

Riley said: “There are three things that stand out: His speed. He’s a coast to coast player with tremendous explosiveness to get down the court. He can go rim to rim with the ball. He’s a shot-blocker. He’s quick. You see a real incredible athlete with great upside. He’s long; 7-2 wingspan. We knew even before they went and had a workout with him. This guy can play.

“In the playoffs, there was a time when size hurt us. Offensive rebounding… we might have a guy that can fill that void.”

“One of the things about athletic bigs like him is a lot of times they have guard instincts, perimeter instincts. Once he understands that his best position is probably going to be four or five [power forward or center], he also has some perimeter skills. He’s a very good ball-handler. He has the ability to shoot the ball from outside, just like with Bam [Adebayo]…

“We won’t force him to be something he’s not. I don’t think there’s a better team in the league that develops players in a conscientious manner than we do. I’m not going to say he can be a knockdown three point shooter. But he has a nice stroke. That might not be the thing we want from him in the beginning.”

▪ Riley said the Heat did not look to add a second-round pick “because of so much uncertainty about the G-league and timing. What we want to do is max out for training camp at 20 players. We’ll probably negotiate with a couple guys after the draft.”

▪ Riley said: “Bam’s improvement has gone through the roof. He has another level to go to. I think you can play both those guys [Adebayo and Achiuwa] together. Not for long periods of time. Only time with tell. Surround them with great playmakers and shooters. I’ll leave that up to Spo. He’s going to be a very exciting player just like Bam.”

▪ Riley said Kelly Olynyk has not informed the team if he plans to exercise his $12.2 million player option. It’s expected that Olynyk will opt in. He has a 5 p.m. Thursday deadline to tell the Heat.

The Heat, at 1 a.m. Thursday, extended a qualifying offer to guard Gabe Vincent, allowing them to match outside offers for him.

▪ Riley said: “As we sit right now, we’re significantly under the tax [$45 million]. I don’t foresee us having to go into the tax but you never know what could happen. One contract can take you there. But it better be one to take you into the Finals.

“We have to be mindful that we lost a lot of the season last year and are only going to play 72 games. Your gate and having a full house is meaningful. Our owner [Micky Arison] is totally committed to winning big time. He had more fun than he ever had watching this team in the bubble. Like me, both of us were very disappointed we couldn’t win [in the Finals against the Lakers]. We’re on that track again to try to win a championship and we’re going to do everything we can to do that.”