For 40 years, Heaven’s Gate has been synonymous with “expensive flop”. And not just any expensive flop, but the type of boondoggle associated with the fussy indulgences of a self-styled film artist. It is considered the symbolic end to a decade where the inmates ran the asylum, when iconoclasts like Francis Ford Coppola, Martin Scorsese and Robert Altman were allowed to operate within the studio system with minimal interference. The film’s director, Michael Cimino, was blamed for pushing United Artists into bankruptcy. It could not be allowed to happen again.

Yet there’s another lesson to be learned from Heaven’s Gate: don’t trust conventional wisdom. Stories about out-of-control productions are difficult for the films themselves to overcome, and only commercial success is a powerful enough counter-narrative to manage it. Kevin Costner’s Dances With Wolves was called “Kevin’s Gate” before it came out and won best picture, and seemingly every James Cameron production has drawn ugly headlines, which Titanic and Avatar survived and The Abyss didn’t.

Cimino’s wounded revisionist western never stood a chance. There’s no point in pretending that Heaven’s Gate, in any form, would have been a box-office sensation. Reviews were apocalyptic when it premiered in a 225-minute cut in New York City. (Vincent Canby of the New York Times called it “an unqualified disaster”.) Reviews were equally bad when it was yanked after a week and re-released in a 149-minute cut. (Roger Ebert called it “the most scandalous cinematic waste I have ever seen”.) And it’s hard to imagine any great public appetite for an American epic about a country built on wholesale slaughter of poor, huddled masses yearning to breathe free.

Five years after Heaven’s Gate, the story of its making and unmaking was memorialized in Final Cut, a book written by Steven Bach, who was an executive at United Artists when the ship went down. It’s one of the great books of its kind – on par with Julie Salamon’s The Devil’s Candy, about The Bonfire of the Vanities – and Bach is admirably reflective about the studio’s failings, not just Cimino’s. But impressions of this rolling catastrophe are hard to shake: the money pit of schedule overruns and reshoots; horror stories of animal abuse and a dictatorial director; the insistence on giving a major role to a French actor, Isabelle Huppert, whose English was barely intelligible; a work print for executives that ran a staggering five hours and 25 minutes; a release date that moved back a full year for additional postproduction; etc.

Now that the dust has settled – and Cimino certainly kicked up world-historic amounts of dust – the film has steadily and rightfully gained in appreciation, boosted by 2012 screenings of a “director’s cut” at the Venice and New York film festivals, and a Criterion release. All the key stakeholders in the film’s original release are gone, the entire apparatus for studio film-making has changed, and even infants at the time are now middle-aged. Heaven’s Gate can finally be seen properly, in a complete cut, freed of the baggage that it wasn’t nearly sturdy enough to carry at the time.

If Heaven’s Gate epitomizes the excesses of the 70s film-brat boom in Hollywood, then it should also represent the revolutionary spirit at its core – a determination to reject the myths and traditions that studio film-making had stodgily upheld. It’s an anti-western, for starters. It’s also just anti-west, in that it’s about how the civilizing forces that tamed the country in the mid-to-late 1800s were, in fact, the villains, violently suppressing the dreams of immigrants and other unfortunates. Immigrants may have built America, the film suggests, but only the few could take ownership of it.

Though the film needs a more commanding actor at its center, Kris Kristofferson cuts a persuasive figure as Jim Averill, the Harvard-educated man who serves as marshal for Johnson county, Wyoming, where class warfare is about to break out into the open. A small band of wealthy cattle barons, united under the name Wyoming Stock Growers Association and led by the ruthless Frank Canton (Sam Waterston), is looking to steamroll the immigrant settlers scattered around the county. Using trumped-up charges of cattle rustling, the WSGA comes up with a list of 125 people and recruits a posse to slaughter them, with the tacit support of the US government. Averill stands in the way, and others fall on different sides of the line, including Nathan Champion (Christopher Walken), an enforcer whose loyalties shift dramatically. 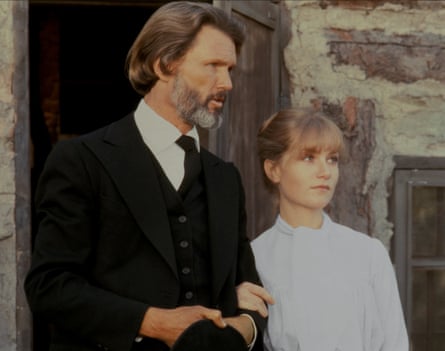 With shades of Altman’s McCabe and Mrs Miller, another revisionist western about capitalists encroaching on an obscure outpost, Heaven’s Gate stages a love triangle between Averill, Champion and Ella Watson (Huppert), a French woman who runs a whorehouse and takes payment in stolen cattle. There’s more than a hint of the modern in how freely Watson shares her love and her body, but her business, with its bartered forms of payment, accommodates the community’s needs harmoniously. So does the rollerskating rink in the center of town, which features one of the few truly joyous sequences in the film, with seemingly every citizen gliding around the floor. This is what happens, Cimino implies, when settlers become neighbors, and act in solidarity.

Yet the real direction of the country is determined in the lavishly catered sitting rooms of the white and wealthy, like the board meeting where Canton gets near-unanimous approval to start what would become the Johnson county war. The second half of Heaven’s Gate devotes too much time to the lawless chaos that ensues – proportionality is not Cimino’s strong suit, here or in films like The Deer Hunter and The Sicilian – but the film doesn’t want its audience to understand the violence here as any old western shootout. This was a genocide carried out by the monied class against a mostly eastern European population, abetted by a government that would ultimately look the other way.

Drawing on old photographs, Cimino and his legendary cinematographer, Vilmos Zsigmond, recreate the era with a sumptuous attention to detail that makes it clear that all of those cost overruns ended up on screen. Some critics at the time complained of its muddiness, but a better word for it is “tactile”, like an illustrated history coming to full-dimensional life. Cimino asks his audience to live in that space for longer than expected, much like the 51-minute wedding that opens The Deer Hunter, and the price for the film’s vividness is lumpen pacing that occasionally drags it down. There’s a sense that Cimino did lose perspective while obsessing over minutiae.

But Heaven’s Gate should not be seen as the calamitous end to an adventurous decade of director-driven studio films, but a messy kind of apotheosis, one last challenge to audiences to reconsider their understanding of what westerns and historical epics can do – and, most of all, what America itself is capable of doing. And now, decades later, it’s past time to reconsider our assumptions about Heaven’s Gate.