George Osborne has been severely criticised by an influential parliamentary committee for wasting up to £50m of public money on plush central London offices for the National Cyber Security Centre (NCSC).

The intelligence and security committee (ISC) said the decision to acquire workspace at Nova South in Victoria, central London, was “unacceptable” and had “an emphasis on image rather than cost”.

The then chancellor Osborne overruled advice from the national security adviser Sir Mark Lyall Grant to force through the purchase of the office space located in property company Land Securities’ ultra-modern Nova development, a report released today has found.

The offices, close to the Houses of Parliament and New Scotland Yard, will cost £96m to lease over 15 years, while a fully costed alternative in Canary Wharf would have cost £46m over the same period.

ISC members Kevan Jones and Stewart Hosie said a better decision-making process would have benefited the public purse and questioned why Lyall Grant had not sought a “ministerial direction” – a formal instruction from a minister to spend public money despite an objection from the spending officer – over the decision.

“The role of ministers in the process as a whole was highly unsatisfactory, culminating in the then-chancellor overruling the then-national security adviser’s very strong advice to reject Nova South, in order to confirm what GCHQ had made clear was the only option that they would accept. In this regard we note that the then-national security adviser failed to seek a ministerial direction,” they said in a statement.

The creation of a National Cyber Security Centre was announced by Osborne in 2015 and tasked with bolstering security against the growing online threats from around the globe.

A consultancy firm drew up a shortlist of 10 options for possible offices – three were taken from tech hubs, two were near Westminster, and five were newly introduced options from within the existing agency and Ministry of Defence (MoD) property portfolio.

The shortlist scored Canary Wharf – a property already leased by the government – as the top option, with new-build commercial properties in Nova South and Shoreditch coming joint second, followed by an existing agency-owned building. 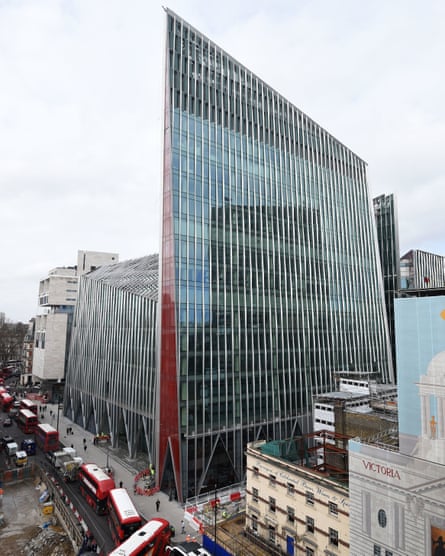 The Nova development in Victoria, London, where the National Cyber Security Centre (NCSC) is based. Photograph: Kirsty O’Connor/PA

Shortly afterwards, GCHQ decided that Nova South was its preferred option, with Canary Wharf as the alternative fall-back option.

On 26 April 2016, Robert Hannigan, the director of GCHQ, wrote to Lyall Grant to request his formal approval, as principal accounting officer for the agencies, for the draft full business case for Nova South.

On 4 May 2016, Lyall Grant wrote to the chancellor, in his capacity as chair of the national security council sub-committee on cyber. He wrote: “From an accounting officer perspective, [Nova South] causes me some concern, both on value for money and deliverability grounds. I would therefore advise against agreement unless there are other considerations of ministerial and public expectation which have not been fully brought out in the business case.”

Crucially – given the importance that had been placed on a launch date in October – Lyall Grant found that Nova South was not deliverable within the specified timeframe.

“The letter is comprehensive and unequivocal. As principal accounting officer for the agencies – and therefore answerable to parliament for their spending – the national security adviser opposed the choice of Nova South,” the report noted.

Soon after this advice was sent, Lyall Grant met Osborne to discuss this issue – but no note of the meeting could be found, which the committee said was “highly surprising”.

“We are informed that no note of this meeting can be found. We find this highly surprising, given that private secretaries would routinely attend and minute meetings their ministers held. However, we have been informed that meetings between the NSA and the chancellor were not regularly minuted,” the report said.

On 18 May 2016, Osborne’s private office emailed the NSA. It read: Based on your discussion last week and the further information provided by GCHQ, the chancellor understands that the options presented in their business case are finely balanced. While [Canary Wharf] is cheaper, the chancellor’s view is that Nova South meets more of the criteria for the NCSC, in that it presents a more modern, hi-tech image and is closer to Whitehall and agency partners.”

In the report, Jones and Hosie continued: “From the outset, the selection criteria used were faulty.

“Locations outside London were never considered, and great emphasis was placed on finding high-end accommodation – without any case being made for that being necessary.

“Even disregarding the faulty criteria, it is clear that GCHQ selected Nova South against all the evidence – and warnings that it would neither be ready on time nor receive approval from the government property unit.

“Nova South was around double the cost of typical government accommodation in London: this was allowed to happen because the scoring system which GCHQ chose significantly underweighted costs and overweighted location.”