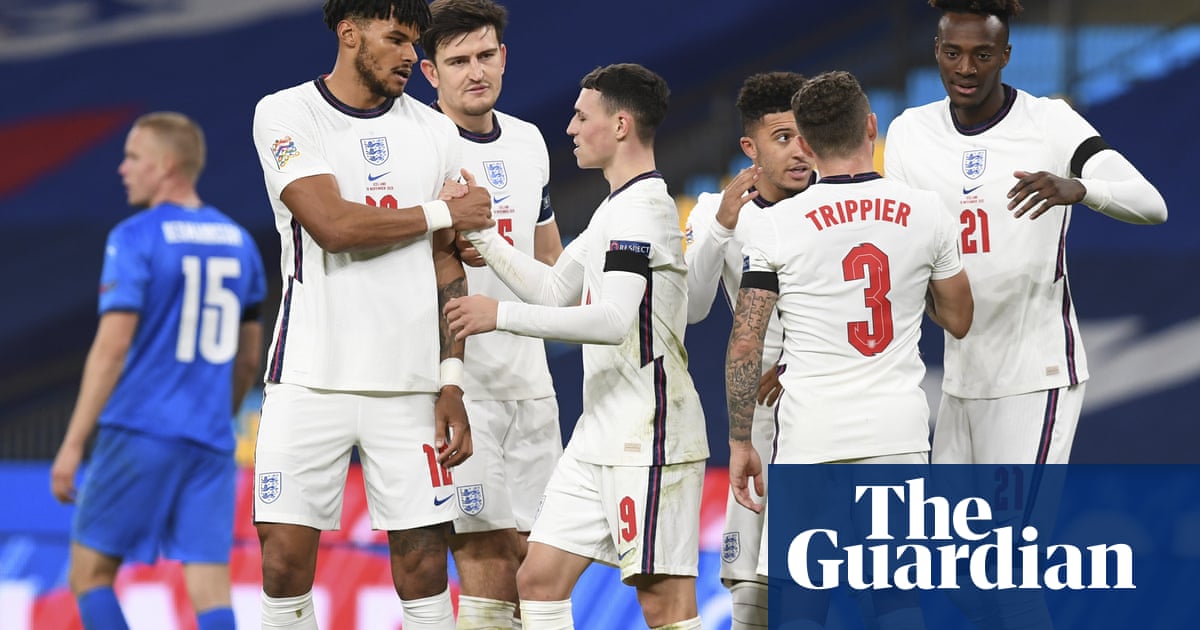 Gareth Southgate has said England are better placed to challenge for the European Championship next summer than he felt they were last November when preparing for the finals that ended up being postponed because of coronavirus.

This time last year the manager and his team had closed out a free-wheeling qualification with 7-0 and 4-0 wins over Montenegro and Kosovo respectively. No other nation scored more goals during the campaign.

This season England have failed to emerge from a tough Nations League group that featured Belgium and Denmark. They won three and lost two of their six matches, scoring seven goals – four of which came in Wednesday’s 4-0 Wembley victory over Iceland. They played well in a pair of 3-0 friendly wins over Wales and the Republic of Ireland.

It has been a tumultuous three months for Southgate, scarred by off-field problems and Covid-related difficulties, chief among them player fitness. But he argues the squad have benefited from facing more testing opposition and that the selection issues have allowed him to blood new players, including some exciting youngsters, who have added to his options.

“We are definitely in a better place than we would have been after last autumn because those games weren’t the challenge we needed to improve,” Southgate said. “Last autumn’s games were a bit of a red herring because we rattled up a lot of goals but we weren’t tested. We didn’t have to break down top-level defences and we didn’t have to defend against top-level teams. This autumn has been far more important and worthwhile for our development.”

Southgate has reintegrated Kyle Walker and Eric Dier this season – key men from the 2018 World Cup in Russia – and a host of players have taken their chances, namely Conor Coady, Kalvin Phillips, Jack Grealish, Dominic Calvert-Lewin, Reece James, Bukayo Saka and Phil Foden. The final three are aged 20 or under.

The manager has made a tactical switch, going from 4-3-3 to 3-4-3, and he believes it has given him greater security and flexibility. He has played with pacy, wide forwards or what he calls “two No 10s” around the centre-forward, enabling a more technical approach.

“We’ve got this strange split in the squad where half of the squad from Russia have drifted away – they’re not playing with their clubs or have retired from international football,” Southgate said. “We’ve got a lot of [other] guys who were the base of the team against Iceland on Wednesday [from the World Cup] who have good experience. Then we have this group who are really innocent at international level and a lot of them are so young, as well.

“What we did say at the time [the Euros were postponed] was that there would be nobody in the squad who would be too old to go a year later and a lot of them would be better for another year’s football. What we have got is some depth now, backed up by more youngsters we think can come through. So the long term looks good.

“We’ve got to keep winning in the short term and make sure we maximise this group and the experienced players. They don’t want to hear us say: ‘We can win in four years’ time.’ They want to win now. Although some of the younger ones will be better prepared in that longer period, there is no reason why we cannot align the two and have some very exciting times.”

Southgate has been pleased with Saka over the most recent break, with the 19-year-old left-sided player catching the eye against Ireland, Belgium and Iceland. With Ben Chilwell restricted to only 38 minutes of England action this season because of injuries and a Covid rule breach, Saka has pressed a convincing claim for the starting left wing-back slot.

“When we were looking at wing-backs [after the formation change] that opened it up a little more for him,” Southgate said. “He has grabbed the opportunity brilliantly.”