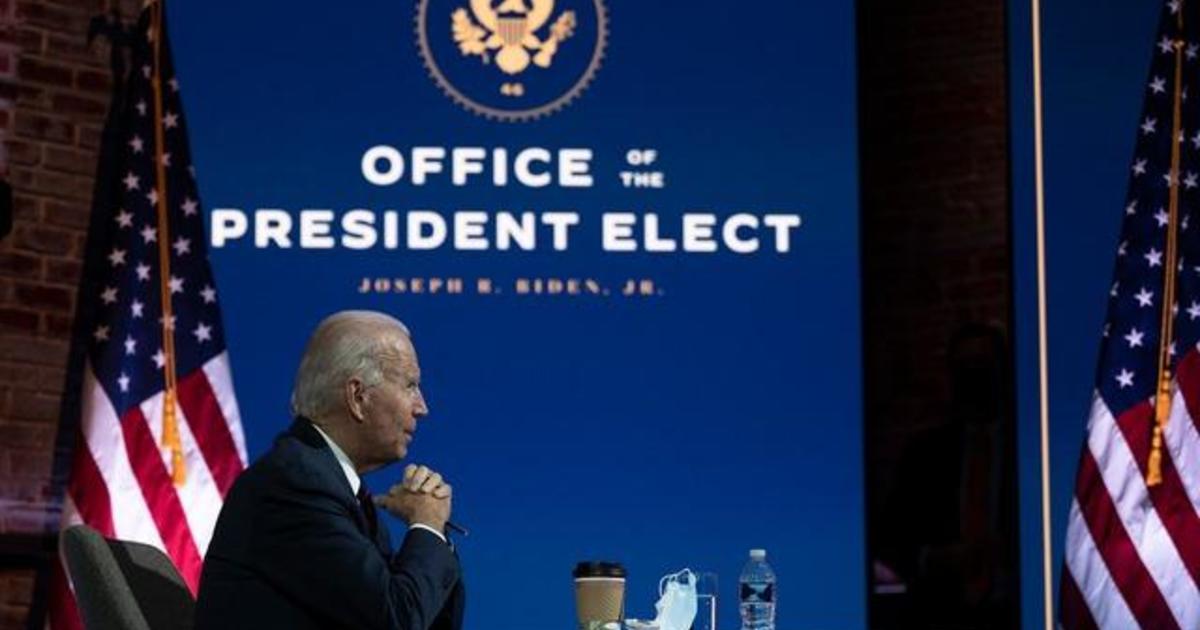 Washington — President-elect Joe Biden said on Thursday that he had made his choice for treasury secretary, saying that he would announce his decision “either just before or just after Thanksgiving.”

“It’s someone who will be accepted by all elements of the Democratic party, moderates and progressives,” Mr. Biden said.

Mr. Biden and Vice President-elect Kamala Harris delivered remarks Thursday as they continue preparing to take the helm of the federal government in January amid the raging coronavirus pandemic and an economic crisis.

The comments from Mr. Biden and Harris followed a virtual meeting with the National Governors Association’s executive committee, which is led by New York Governor Andrew Cuomo, a Democrat, and Arkansas Governor Asa Hutchinson, a Republican. The president-elect discussed COVID-19 with the governors and called on states to impose mask mandates and ramp up testing and contact tracing.

In his remarks, Mr. Biden slammed the General Services Administration, which oversees the presidential transition, for not formally kickstarting the process. Until GSA Administrator Emily Murphy issues a letter of “ascertainment” affirming that Mr. Biden won the election, transition team officials cannot meet with agency staff to begin planning how the Biden administration will implement its policy priorities. However, Mr. Biden said that the information provided by the governors would factor into his plan for addressing the pandemic.

“We will take what we’ve learned today and build it into our plan,” Mr. Biden said, adding that he hadn’t “ruled out” legal action against the GSA. He slammed the president for refusing to concede the election, saying that the American people were “witnessing incredible irresponsibility.”

“It sends a horrible message about who we are as a country,” Mr. Biden said.

He also praised the bipartisan group of governors for affirming that they would work together to defeat the virus.

“The governors made clear that beating COVID-19 will require all of us working together,” Mr. Biden said, adding that each governor had said that they supported the distribution of a “safe, equitable and free vaccine.” The president-elect also pushed back against allegations that he supported shutting down the economy, saying there was “no circumstance I can see which would require a total national shutdown.”

Mr. Biden also said that this was not a “one-off meeting,” adding that he would continue to meet with governors to discuss the problem after he took office. The president-elect also called for governors to support a mask mandate, saying wearing a mask was a “patriotic duty.”

“We can do this. But we have to come together as a country,” Mr. Biden said.

In her remarks introducing Mr. Biden, Harris promised that the incoming administration would work with state governors of both parties to ensure that the pandemic is mitigated.

“President-elect Biden and I will make sure you have the resources and support you need to save lives,” Harris said.

In remarks to the governors, Mr. Biden lamented that his team has not yet been able to gain access to information related to the pandemic due to the lack of formal acknowledgement from the General Services Administration that he is the winner of the presidential race.

“But we will take what we learn today and build on that for our planning,” he said.

Mr. Biden pledged to the governors that “I will be your partner in the White House.”

“I don’t see this as a red state issue or a blue state issue. I see this — all of us together,” he said.

Mr. Biden’s remarks and his meeting with the governors come as coronavirus infections are surging across the country and hospitalizations have reached more than 79,000. On Wednesday, the U.S. surpassed 250,000 deaths from the coronavirus, and there have been more than 11.6 million confirmed cases.

While President Trump continues to falsely claim widespread voter fraud in the general election and has yet to concede 16 days after Election Day, Mr. Biden has spent the last two weeks meeting with transition advisers, business and labor leaders, and his COVID-19 advisory board on how best to tackle the pandemic.

Mr. Biden and his transition team, however, still do not have access to federal dollars, resources and agency staff, including the Trump administration’s plans for distribution of a coronavirus vaccine, due to the GSA’s decision not to allow the transition to begin in earnest.

Mr. Biden, however, has continued to make appointments to his White House team, tapping longtime aides and senior campaign staff for top positions in government.