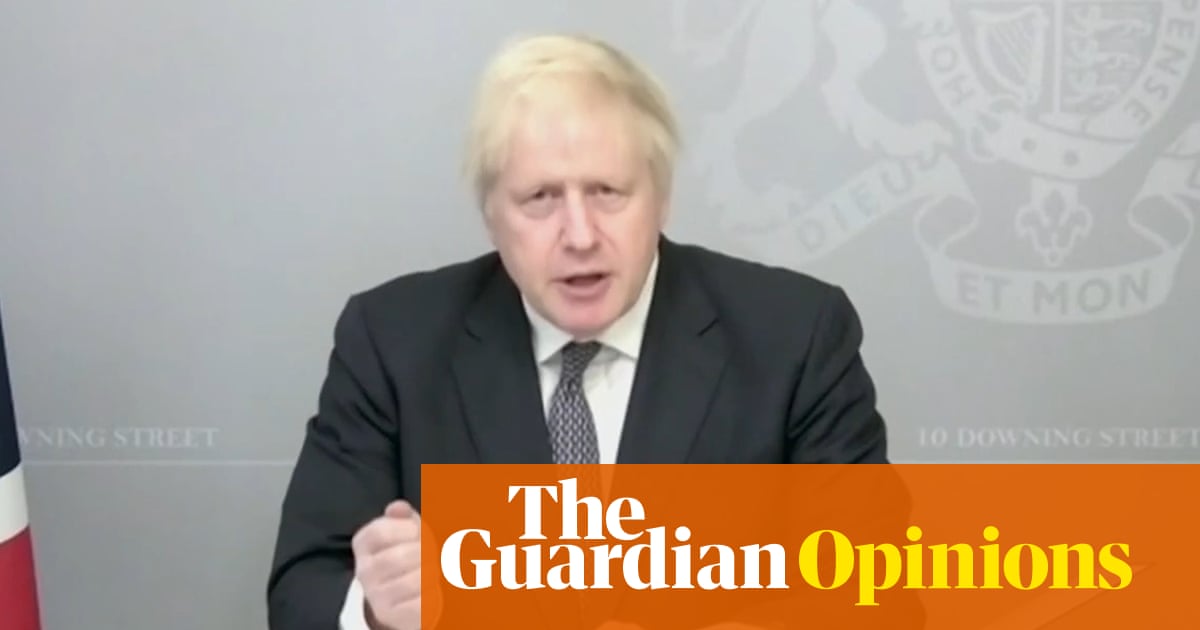 It was meant to be an Integrated Review of Security, Defence, Development and Foreign Policy. But when you’re trying to convince the country and the US president-elect that your government isn’t in a bit of a mess after the departure of several senior No 10 advisers and that you do have some vaguely credible ideas, then you make do with what you’ve got. So from the same Downing Street basement echo chamber – this time with a hint of a union flag – that he had used for prime minister’s questions the day before, Boris Johnson gave a statement on the Unintegrated Review of Security and Defence.

For too long, Johnson insisted, the UK had been in retreat. It might have come as a surprise to him that much of the retreat had been on his own party’s watch as the Conservatives have been in power for more than 10 years and it is they who had been cutting the defence budget by £8bn. But now we were entering a new era of plenty whereby the armed forces would get a £16.5bn increase in spending – over and above the 2.2% already promised – over the next four years.

There was a time when such large amounts of money would have been announced with more caution. But as we’re already spending £250bn and counting on the coronavirus, a mere £24.1bn is now regarded as chicken feed. Boris has come to realise that if you don’t have the cash, then you can always print it.

“The chancellor and the defence secretary believe in this as much as I do,” he said. Which is a lie. Rishi Sunak is known to have been deeply resistant to such a large departmental budget rise, but had to give in when he saw how excited Boris was about the project. But what was done was done and Rishi was happy to take the credit in another of his personalised tweets. Dominic Cummings may be gone, but there are still plenty of power struggles going on inside government and no point is too petty not to be scored.

Johnson rattled through his Christmas toy list. There was going to be more money for cyber-weapons – Boris is one of the few world leaders not to have realised the Star Wars films were not documentaries – and the army was to be equipped with whatever it needed: phasers, lightsabers and special top secret communications to let them know where the enemy was. It might be handy if No 10 also got some new comms thrown in as a job lot. The sound quality of the statement was, if anything, even worse than the day before, with the prime minister frequently dropping out or failing to identify who was speaking.

There were also going to be many more ships with the latest hi-tech equipment and Britannia would once again rule the waves. Johnson has always had a thing about the navy. There would be no ocean off limits to our frigates, though we probably wouldn’t be getting too close to China. Not because we were a bit frightened of the Chinese, of course: just that they were a very, very long way away.

The Labour leader kept his reply short and sweet. He welcomed the additional spending but felt this was an announcement without a strategy. There was nothing on how it would be paid for and no commitment that the Tories would stick to their manifesto promise of spending 0.7% of gross national income on overseas aid. It sounded very much as if the money was going to come from cuts to the aid budget: could he give a guarantee that this would not happen? And while he was about it, would the prime minister promise not to cut the armed forces personnel once he had bought all his new gadgets?

Boris was not prepared to make any such pledges. Indeed he didn’t appear to have listened to a word Keir Starmer had said. The absence of Cummings to supply even a half-decent riposte is already beginning to tell. Rather, Johnson just had a pre-cooked rant about how Jeremy Corbyn had tried to leave Nato, get rid of the armed forces and how the new Labour leader had basically been his lap dog.

Not for the first time, the prime minister is a little behind the news, given that Starmer is currently locked in a battle with Corbyn and the Labour left over the direction of the party. Keir often appears surprised even when he’s not, but this time the look of surprise was entirely genuine. Like the rest of us, he must wonder how Boris continues to get away with being so shit.

As if to prove the point, Johnson went through the rest of the session – the bits that he could hear and the bits that he was listening to at any rate – as if on auto-pilot. He lapped up the sycophancy from many on his own benches, even to the extent of calling Liam Fox “an expert” – not a word that’s ever been used about the minister before – and offered the vaguest of reassurances to opposition MPs that some of the benefits of the spending splurge would filter down to their constituencies.

He still, though, refused to commit even to Tory entreaties not to cut the 0.7% overseas aid budget, so that looks as if it’s gone in collateral damage. There was a time when governments thought that every pound spent on aid was a pound saved on bullets. But Boris is not that kinda guy. He’s the Buzz Lightyear of No 10. The wannabe Mr Macho desperate to prove he’s writing his own scripts. To infinity and beyond.