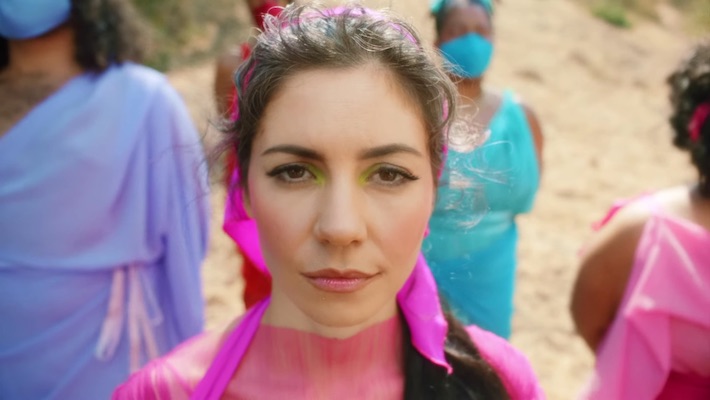 2019 brought Love + Fear, Marina Diamandis’ first album after leaving her Marina And The Diamonds name behind and moving forward mononymously as Marina. Now she’s getting ready to take the next steps in her re-branded journey: Today, she released a video for “Man’s World,” the lead single off a new album that’s expected in 2021.

She sings on the hook, “Mother nature’s dying / Nobody’s keeping score / I don’t wanna live in a man’s world anymore.” Marina put her money where her mouth is, too: The song and video were made with an all female and non-binary roster of collaborators. This comes after she put out feelers for new female collaborators in the summer of 2019, writing on Twitter, “Who are you favourite female producers, writers and artists right now? I’m creating my next project… and this story can only be told by women. I’m looking for you.”

In a new Vogue profile, Marina says of the song:

“I wrote it last summer in August. I’d already decided I was gonna write this new record alone, and the process felt like a reaction to what I had previously released, which is often the case. Each record I do is sort of like the opposite of the previous one. At the time I was mostly inspired by the shifts that are happening for people who are discriminated against. The original idea for the song was to write a snapshot of how women and LGBTQ+ individuals have been subjugated and discriminated against throughout history going back to the Salem witch trials, where any person who was deemed abnormal or slightly alternative was singled out. Those kinds of patterns are still present in society. That’s something inspiring to me and worth writing about.”

She also said of the video, “It’s the first one I’ve ever been credited with creative directing and writing the story for — again, I’ve done this role before, but it’s one of those basic things where people think the artist didn’t do it because their name isn’t always on it. I came up with the treatment in March, then sent it to [director Alexandra Gavillet], and we developed it more together. I’ve been inspired by this artist who made these neoclassical paintings in the late 1800s named John William Godward. They use these very modern color compositions like mint green with chartreuse or magenta. That was the center of the whole video and the main visual inspiration.”

Watch the “Man’s World” video above.