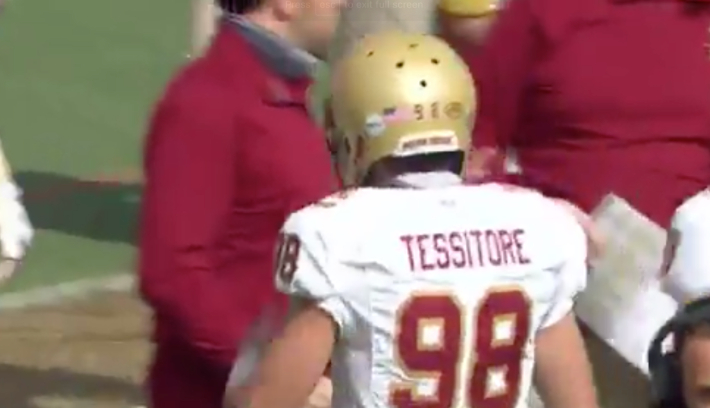 Joe Tessitore is back on college football duty for ESPN this season after spending a few years as the voice of Monday Night Football. Tessitore cut his teeth in the college game, where he received praise for his professionalism and ability to make big moments sound a little bigger by taking his calls to a different level. On Saturday afternoon, one such call hit a little bit closer to home during Boston College’s game against No. 1 Clemson.

The Eagles faced a fourth-and-2 deep in Tiger territory. The ball was on the 23-yard line, and with the team up by 11, Boston College thought it’d be fun to try and catch Clemson overzealous. They sent one of their blockers out wide, had their holder go under center, and managed to get the Tiger defense to jump offside.

The catch: The BC holder was John Tessitore, a redshirt sophomore specialist whose last name should be a bit of a giveaway here. Joey Tess, with his usual sense of bravado, made the call as his son managed to get the best team in the nation to jump.

Watching the ESPN stalwart provide a little background info on his son’s football career before college was a nice added touch. One play later, Eagles signal caller Phil Jurkovec dropped back and connected with CJ Lewis, who made one heck of a catch to make the score, 28-10.

Clemson would go on to kick a field goal on the ensuing drive to make the deficit 15 points at halftime, but it’s worth remembering the specialist who made the last BC touchdown of the half possible. Joe Tessitore sure will.