Remember that lurch in your stomach when you realised that Donald Trump had been elected as US president? Not to bum anyone out, but there’s a chance that it might happen again in a few days. Elections are fun and exciting, but also have the potential to end democracy as we know it. That’s why we’ve put together the next best thing: a US election comprised solely of fictional presidents from film and TV. These figures are bold, pure and tough as nails. Most importantly, they don’t exist, so they won’t plunge the world into a nightmare of war and corruption if they get elected.

Listed below are the names of a bunch of fictional presidents. Eight are Democrats, eight are Republican and three are unaffiliated. We will hold primaries for each category before handing the decisions over to our voters, Hari Kondabolu and Billy Ray. Kondabolu was responsible for the 2017 doc The Problem With Apu, and co-hosts the unmissable Politically Re-Active podcast. Ray wrote and directed brilliant miniseries The Comey Rule, which dramatised FBI director James Comey’s tortuous dealings with Donald Trump. They know their stuff. They want to speak for the people. In the event of a stalemate – to mimic the electoral college system – we will step in and decide with a coin toss. Ah, democracy in action … 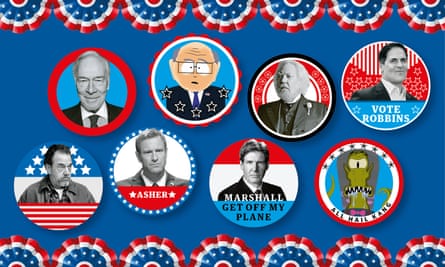 Pop culture rarely puts much stock in GOP presidents. So while we tried to be fair, the following list has a large contingent of cowards, scumbags and aliens who gain the public’s trust by wearing Bob Dole skinsuits.

PJ Aimes, The Summit
Christopher Plummer
Plummer played a Republican president in a forgotten 2008 Canadian miniseries about a corrupt government attempting to cover up the outbreak of a global pandemic. This is a totally unbelievable premise, of course.

Marcus Robbins, Sharknado 3
Mark Cuban
Robbins is a true American hero. How many other presidents have personally staved off a howling tornado of live sharks by blowing up the fish with a shotgun? Robbins’s political affiliation is never revealed in Sharknado 3, but his VP is Ann Coulter, so we can guess.

James Marshall, Air Force One
Harrison Ford
In the movie adaptation of Air Force One, Marshall doesn’t have a political affiliation. In the book, however, he is a Republican. Either way, he single-handedly managed to Die Hard a load of terrorists when they hijacked his plane, so let’s not mess with him. 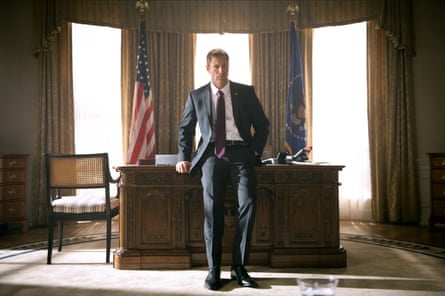 Benjamin Asher, Olympus Has Fallen
Aaron Eckhart
Asher is tough but sensitive; a man’s man still recovering from the death of his wife and son. When terrorists invade the White House, he ends up being shot in the stomach, but unfortunately not fatally enough to prevent a sequel from being made.

Charles Logan, 24
Gregory Itzin
A classically Nixonian baddy and perhaps the greatest villain to square up to terrorist-hunting hero Jack Bauer. As slippery, unlikable and thoroughly corrupt as any screen president, Logan nevertheless possessed an oily charisma that could propel him far in this contest.

Kang, The Simpsons
Voiced by Harry Shearer
In Treehouse of Horror VII segment Citizen Kang, the one-eyed alien becomes president, then sits on a throne as an enslaved human population build him a giant raygun. Still better than the alternative (in this instance the alternative is an identical alien named Kodos).

Mr Garrison, South Park
Voiced by Trey Parker
South Park’s Trump analogue, Garrison has murdered hundreds of thousands of Canadians and voiced his support for the coronavirus wiping out the bits of humanity he doesn’t like … which makes him approximately middle of the pack in terms of awfulness here.

Coriolanus Snow, The Hunger Games
Donald Sutherland
President Snow exists outside of the two-party system, and may not even have been elected democratically. Still, he did rule over a post-apocalyptic wasteland where the youth are pitted against one another in a grisly battle to the death. So let’s play it safe and lump him in with the GOP.

Hari Kondabolu:
Kang
“Considering that under Trump we’ve had an impeachment, realistic threat of nuclear annihilation and a pandemic, why not add an alien invasion for good measure? I’m pretty sure that, if there was an alien attack, Trump would not try to fight, but try to independently negotiate a deal. By “negotiate”, I mean he would tell the aliens all our secrets and sacrifice our lives in exchange for his own. That being said, maybe the Earth needs a complete regime change from humanity to an alien life form.”

Billy Ray:
James Marshall
“I like kickass presidents, OK? No bone-spur deferments here. President Marshall beats the living crap out of people, understands aeronautics, and is VERY tough on Russia. Yet somehow Marshall always maintains his humanity, and goes out of his way NOT to endanger his Secret Service detail. Also, his wife is awesome. Last thing: he bypassed Mike Effing Pence and picked GLENN CLOSE to be his VP. Strong! Very high marks.” 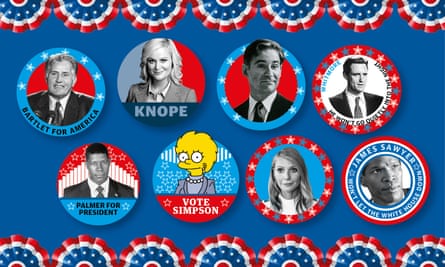 David Palmer, 24
Dennis Haysbert
A truly impressive contender. David Palmer has overcome attempts on his life, a disastrous marriage, a duplicitous cabinet and a nuclear attack. True, he was eventually murdered by a sniper, but even dead he’s an improvement on the current guy.

Thomas Whitmore, Independence Day
Bill Pullman
We have no way of knowing how Whitmore, named a Dem in the novelisation, would deal with trade tariffs. But as the right man at the right time, he was second to none. Dealt the worst day in all of humanity, he stared it straight in its tentacled face and blew it out of the sky for the sake of humanity. 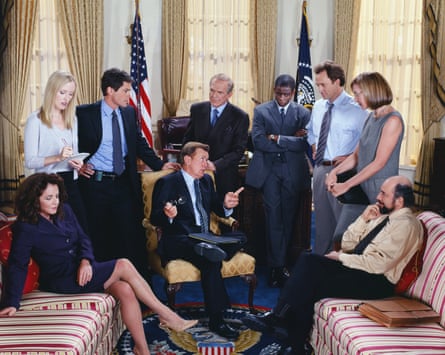 Jed Bartlet, The West Wing
Martin Sheen
After The American President, Aaron Sorkin outdid himself with an even more memorable onscreen Potus in the form of Josiah Edward “Jed” Bartlet. Religious but not dogmatic, folksy but not patronising, you’d expect Jed to go far in any election.

Georgina Hobart, The Politician
Gwyneth Paltrow
There is no way of telling what sort of president Hobart is; as we left Ryan Murphy’s drama at the end of season two, she was merely president-elect. However, she is played by Gwyneth Paltrow, so we do know that her candles probably smell a bit like vaginas.

Lisa Simpson, The Simpsons
Voiced by Yeardley Smith
As foretold in the episode Bart to the Future, Lisa will one day become our “first straight female president”. She will rule with grace and decency, despite the efforts of her freeloading brother, and will eventually legalise the sale of cannabis. The question is: will she become president this year? 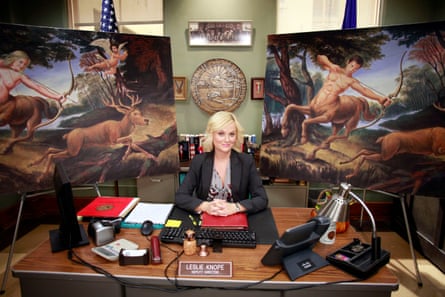 Leslie Knope, Parks and Recreation
Amy Poehler
The implication in the sitcom’s season finale is that altruistic local official Leslie Knope is made president. Would the US prosper under her aggressively positive can-do attitude, or would her blind ambition plunge it into the greatest catastrophe it has ever faced?

James William Sawyer, White House Down
Jamie Foxx
The Democrat opposite of Olympus Has Fallen’s Benjamin Asher, Sawyer actively seemed to enjoy himself when terrorists invaded the White House. And, let’s be honest, if you want anything from a president, it’s glee in the face of murder.

Dave Kovic, Dave
Kevin Kline
A tricky one, this. Kovic has all the hallmarks and policies of a Dem. But he’s also a lookalike who was hired to fill in after the real Potus (believed to be a Republican) fell ill. Still, Kovic reinvigorated an ailing country and won the heart of the first lady, so never let it be said that America isn’t a meritocracy.

Hari Kondabolu:
Thomas Whitmore
“If there ever was an American president that could lead us during a global crisis, it would be Thomas J Whitmore. His speech to the world before its united and carefully coordinated effort to destroy the invading alien spacecraft is powerful: “We will not go quietly into the night! We will not vanish without a fight! We’re going to live on! We’re going to survive! Today, we celebrate our Independence Day!” The fact he then gets into a fighter jet to save the planet, and not just send other people’s children to fight, gets bonus points.”

Billy Ray:
Thomas Whitmore
“I love everything about him. He’s a fighter pilot who can shake off the death of his wife, communicate with alien life-forces, and order the nuclear bombing of Houston in a single afternoon. Also, he gives hugely rousing speeches. Big writing points there. Plus he’s not a grudge-holder. He and Jeff Goldblum’s characters had once hated each other, but they put that aside and came together to save humanity. Very mature, very un-Trumpy.” 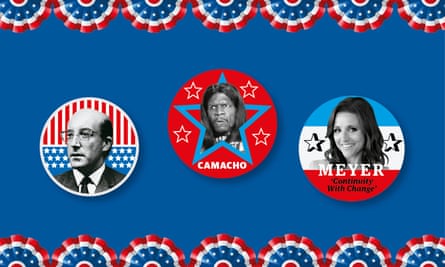 The smartest thing to do in film or TV is to withhold the party of the president entirely, meaning that you have all the authority of office but none of the partisan sniping. There were many options to choose from, but here’s a sample of the best indies.

Merkin Muffley, Dr Strangelove
Peter Sellers
The ostensible straight man in Kubrick’s cold war satire, Muffley puts serious effort into preventing nuclear Armageddon. He rules out violent retribution. He frets over the victims. Sure, he fails in his one job, but at least he does it with grace.

Selina Meyer, Veep
Julia Louis-Dreyfus
The only figure on the list to serve as president on two occasions, for a year after her predecessor resigned, and then – in the finale – for a full term. Once elected Meyer freed Tibet (then gave it straight back to China) and repealed same-sex marriage.

Hari Kondabolu:
Dwayne Camacho
“Since we are on a direct flight to Idiocracy, President Camacho seems like an inevitable and appropriate next step. Honestly, his scenes are basically Trump rallies except Trump’s not firing a machine gun. Though let’s see what happens after the election.”

Billy Ray
Merkin Muffley
“Hugely resilient in terms of popularity. He stood watch over nuclear destruction and we still think of him fondly. He’s cool under pressure, too: the world’s going to hell and he’s polite. Trump once went batshit because he didn’t get invited to a funeral he wouldn’t have attended anyway.” 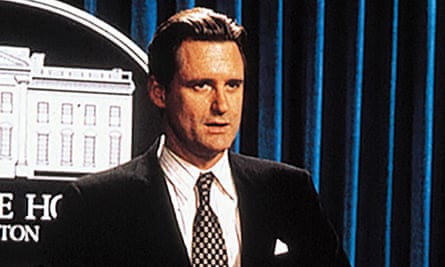 The Potus with the mostest … Bill Pullman as Thomas Whitmore in Independence Day. Photograph: United Archives/Alamy

“To me, you have to judge a fictional president by the crisis he or she was facing,” says Billy Ray. “Whitmore is contending with THE END OF HUMANITY ON PLANET EARTH, and he’s doing it while mourning his dead wife. Plus, Whitmore is being played by a guy whose film background was in comedy. So he had more to overcome just to get the aliens to take him seriously. On a degree-of-difficulty scale, Whitmore is in Abe Lincoln territory, except all the John Wilkes Booths around him have fucking lasers. No contest.” Hari Kondabolu adds: “That speech, man. It’s something else.”

And there we have it. Thomas J Whitmore, you have finally brought a warring nation together. With your gung-ho attitude, devilish good looks and astounding way with words, you are now and for ever the definitive screen president. Now let’s do the decent thing and agree never to mention Independence Day 2.