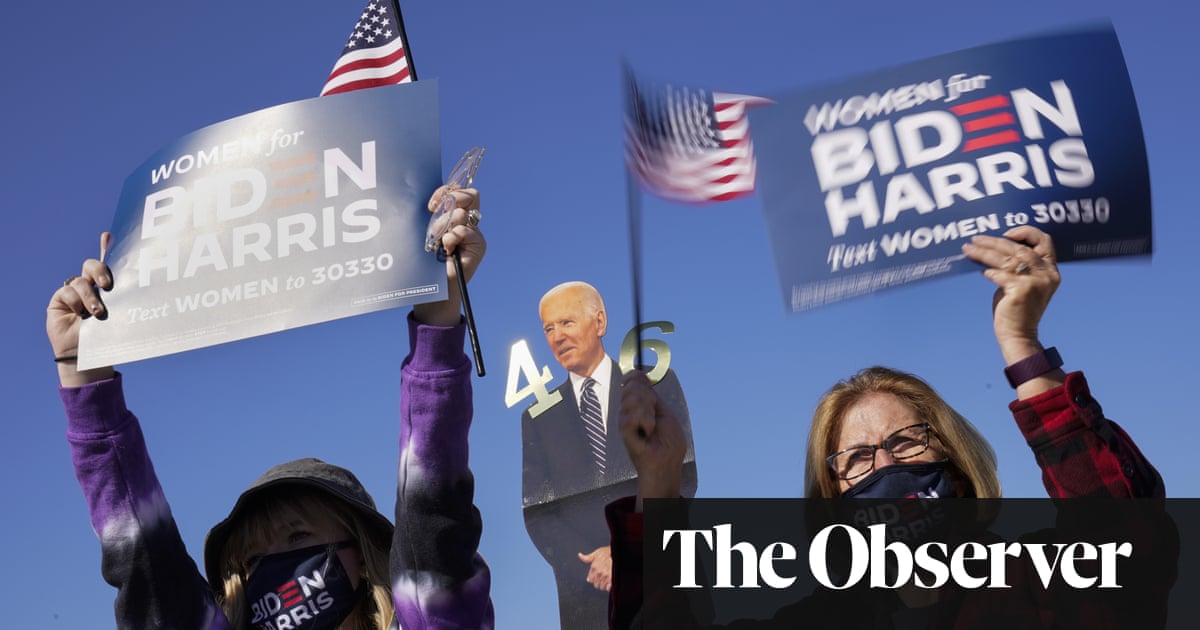 America was on edge on Saturday as Donald Trump and Joe Biden launched a final campaign blitz amid a surging pandemic, record early voting and gnawing uncertainty over when the outcome of the presidential election will be known.

Trailing in the polls, Trump began a frenzied schedule of 14 rallies in three days, even as the coronavirus scythed through the country. The US recorded more than 99,000 cases on Friday, its biggest ever single-day total. Many of the worst outbreaks are in the battleground states where the president is travelling.

Biden campaigned with Barack Obama at drive-in rallies in Flint and Detroit, predominantly Black cities where strong turnout will be essential in the fight for Michigan. Stevie Wonder was to perform in Detroit.

With record numbers of infections, and record numbers of voters casting ballots early, the dominant narratives of 2020 were hurtling towards a potentially destabilising climax. There was intense anxiety over whether Tuesday will deliver a clear verdict or a prolonged, agonising vote count, over days or even weeks.

More than eight in 10 Americans (86%) are somewhat or very worried there will be violent protests following the election, the Public Religion Research Institute found. Businesses in New York, Washington and other cities were boarding up in case of trouble.

Trump has spent months claiming, without evidence, that he can only lose if it the vote is rigged. He has threatened to challenge the outcome and refused to commit to a peaceful transfer of power. Democrats have called for massive turnout, to put the result beyond doubt.

The election comes after a year that has seen an impeachment trial, an economic crisis and a reckoning over racial injustice. But Covid-19 remains the defining issue and the candidates’ closing arguments could not be more different.

Biden has been driving home the message that Trump mismanaged a pandemic that has infected 9 million and killed 229,000. “He’s doing nothing,” the former vice-president said this week. “We’re learning to die with it. Donald Trump has waved the white flag, abandoned our families and surrendered to the virus.”

On Friday, he baselessly claimed: “Our doctors get more money if someone dies from Covid. You know that, right? I mean, our doctors are very smart people. So what they do is they say, ‘I’m sorry but everybody dies of Covid.’”

The president was to hold four rallies in Pennsylvania on Saturday, then five on Sunday and five on Monday across Iowa, Florida, Michigan, North Carolina, Pennsylvania and Wisconsin. Observing mostly maskless supporters crammed together, critics have branded such rallies “super-spreader events”.

Bob Shrum, a Democratic strategist who advised Al Gore and John Kerry, said: “Trump is frantically flying around the country in Air Force One giving these rally speeches, which I think motivate his base but also alienate a lot of other voters because they look at the pictures where people are cheek by jowl and there’s no masking.”

Noting an outbreak among Vice-President Mike Pence’s staff, Shrum added: “You have just had Covid invade the White House for a second time, so I think it adds to the sense that that he can’t handle Covid.”

Polls show Biden with a consistent lead nationally and up by smaller margins in the states that will decide the electoral college. Democrats could also win a majority in the Senate, potentially ending years of gridlock.

Bob Woodward, author of two bestselling books about Trump, said: “It looks like Biden’s going to win but I would not bet more than a dollar on it. I think it’s quite possible that Trump will win.”

Polling, he warned, “is a measure of, when they call around, a thousand or two thousand people who are crazy enough to pick up the phone and answer the question. So they have polled 2,000 people who don’t have the sense to hang up the phone, which is what most people do. So what are you measuring? What is the polling tell us?”

Woodward added: “I’m convinced that the supporters of President Trump to the core will crawl through snow and rain and fire to vote and support him. I don’t think Biden has that kind of intellectual and emotional support, or at least at the level that Trump has.”

Trump aides and loyalists insist he can pull off another Houdini act. Newt Gingrich, a former House speaker, said: “I think it’s 70% Trump gets elected and 30% Biden wins.”

Asked why he was saying the opposite of what polls show, Gingrich replied: “Because I think they’re all wrong. These were the same polls that were totally wrong in ’16. Why would you guys believe them? They’ve learned nothing.”

For some, long queues of voters offer hope of that America will pull back from the brink of disaster. Drexel Heard, a Black LGBTQ activist and Democratic official in Los Angeles, said: “As soon as we get results or as soon as we hear that Joe Biden’s been elected, I think the temperature might just come down in the country, people might breathe a sigh of relief just for a little while because they’ll feel comfortable knowing that the next four years are not going to be chaos, that their families are not going to have to decide between their healthcare and their house.

“That’s a big thing for us because we’ve never been this chaotic in American history outside of wartime.”